Meeting Zarif for the first time since becoming foreign minister earlier this month, Motegi voiced serious concern about the situation in the Middle East following recent attacks on oil facilities in Saudi Arabia.

"We are very much concerned about the grave situation," Motegi told Zarif at the outset of the meeting on the fringes of the U.N. General Assembly in New York. Japan will continue to work toward stabilizing the region, he added. 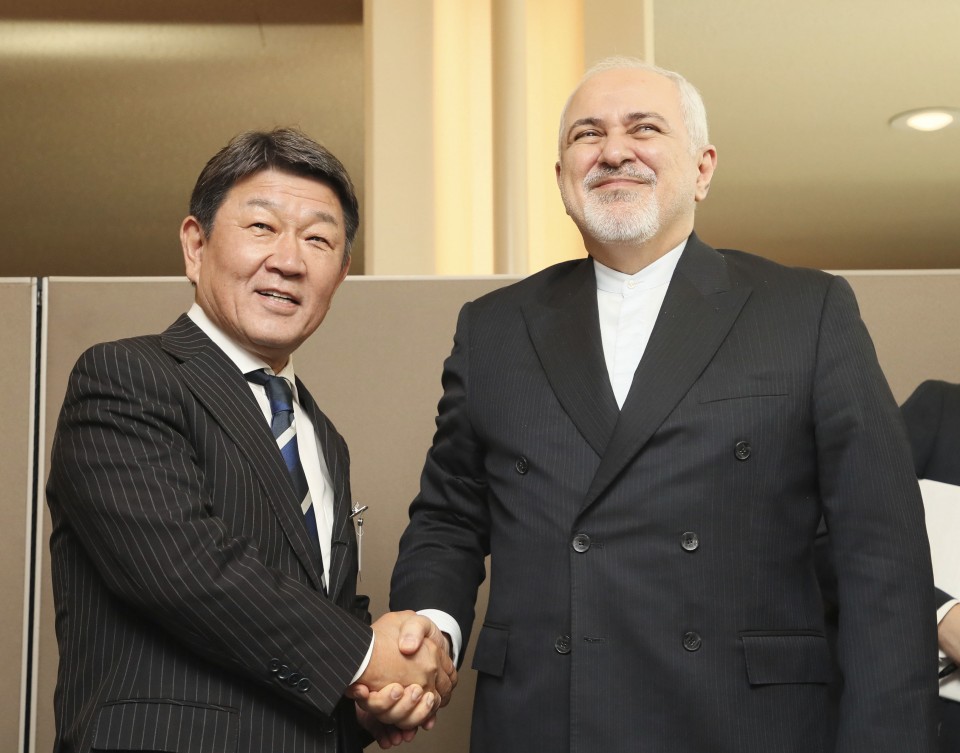 Zarif, meanwhile, took issue with what he called the prevailing view that war could be imminent, in reference to the recent U.S. move to send more troops to Saudi Arabia.

The decision to dispatch additional troops came as the United States has placed the blame on Iran and imposed additional sanctions over the attacks on Saudi oil facilities. Yemen's Houthi rebels immediately claimed responsibility for the strikes, while Iran has denied involvement.

Japan, as a mediator, is seeking to promote dialogue between the United States and Iran as stability in the Middle East is vital for the resource-scarce country. Japan relies heavily on crude oil imports from Saudi Arabia and the United Arab Emirates.

The Motegi-Zarif meeting came a day before Japanese Prime Minister Shinzo Abe plans to hold talks with Iranian President Hassan Rouhani on the margins of the U.N. General Assembly.

Prior to his visit to New York, Rouhani said he would unveil a peace plan for the Persian Gulf on the occasion of the annual U.N. gathering, while the United States is calling for a coalition to be formed to ensure safety in the Strait of Hormuz.

Zarif explained details of the Iranian plan to Motegi during the meeting, according to a Japanese government official.

Despite being a longtime U.S. security ally, Japan has taken a cautious stance about joining the U.S.-led initiative, due to its traditionally friendly ties with Iran.

Japan's Foreign Ministry said Motegi "strongly asked" Zarif during their meeting to refrain from taking action that would undermine a 2015 nuclear accord.

Iran has been hit by the U.S. re-imposition of sanctions after the United States pulled out of the nuclear deal reached between Tehran and other major powers.

In response, Iran has breached its uranium enrichment limit in a step away from the accord, prompting Japan to try to persuade Tehran to follow its commitment. Tokyo is not part of the agreement.