Japanese Prime Minister Shinzo Abe and U.S. President Donald Trump signed off on a bilateral trade agreement Wednesday that cuts tariffs on farm and industrial products, with both hailing it as mutually beneficial.

The agreement represents a victory for Trump, who has pursued an "America First" policy agenda and sought to mollify U.S. farmers bearing the brunt of the abrupt U.S. withdrawal in 2017 from the Trans-Pacific Partnership regional free trade pact.

In a reprieve to Japanese automakers, Japan escaped the threat of higher auto tariffs that Washington can impose for national security reasons. But Tokyo failed to secure the scrapping of existing U.S. levies on Japanese vehicles and auto parts -- an agreement it had reached under the TPP.

"Japanese tariffs will now be significantly lower or eliminated entirely for U.S. beef, pork, wheat, cheese, corn, wine, and so much more," Trump said at the outset of the meeting alongside Abe. The agreement will open new markets for $7.2 billion in American agricultural products.

"This is a huge victory for America's farmers, ranchers, and growers. And that's very important to me," Trump said. He also indicated that talks will continue for a "comprehensive" deal that covers services trade as well.

The agreement will "enhance bilateral trade in a robust, stable, and mutually beneficial manner between our nations," the two leaders said in a signed joint statement.

Abe, who is in New York to attend the U.N. General Assembly, said the impact of the trade deal, which covers about a third of the world's economy, is significant.

"When the pact enters into force, there is no doubt that Japanese investments will increase and both of our economies will grow," Abe said. "I'm confident that it will be something of a win-win for both countries."

After domestic procedures are completed, the accord is expected to enter into force on Jan. 1, U.S. Trade Representative Robert Lighthizer said.

Reduced taxes on U.S. beef and pork are expected to benefit American farmers who feel disadvantaged compared with foreign rivals due to multiparty frameworks, including the revised Trans-Pacific Partnership free trade pact that has been attacked by Trump.

Auto tariffs were in the spotlight during the bilateral negotiations as both nations have big car industries, with auto exports accounting for roughly a third of Japan's trade with the United States.

At issue was whether Japan would win an exemption from Section 232 of the U.S. Trade Expansion Act put into writing.

Abe later told a press conference that he has confirmed with Trump that additional tariffs will not be imposed on Japanese cars and auto parts.

Lighthizer, who was Motegi's counterpart, also told reporters that it is not the president's intention to do anything on "autos, 232s, on Japan."

The statement signed by Abe and Trump said, "While faithfully implementing these agreements (on goods and digital trade), both nations will refrain from taking measures against the spirit" of them. 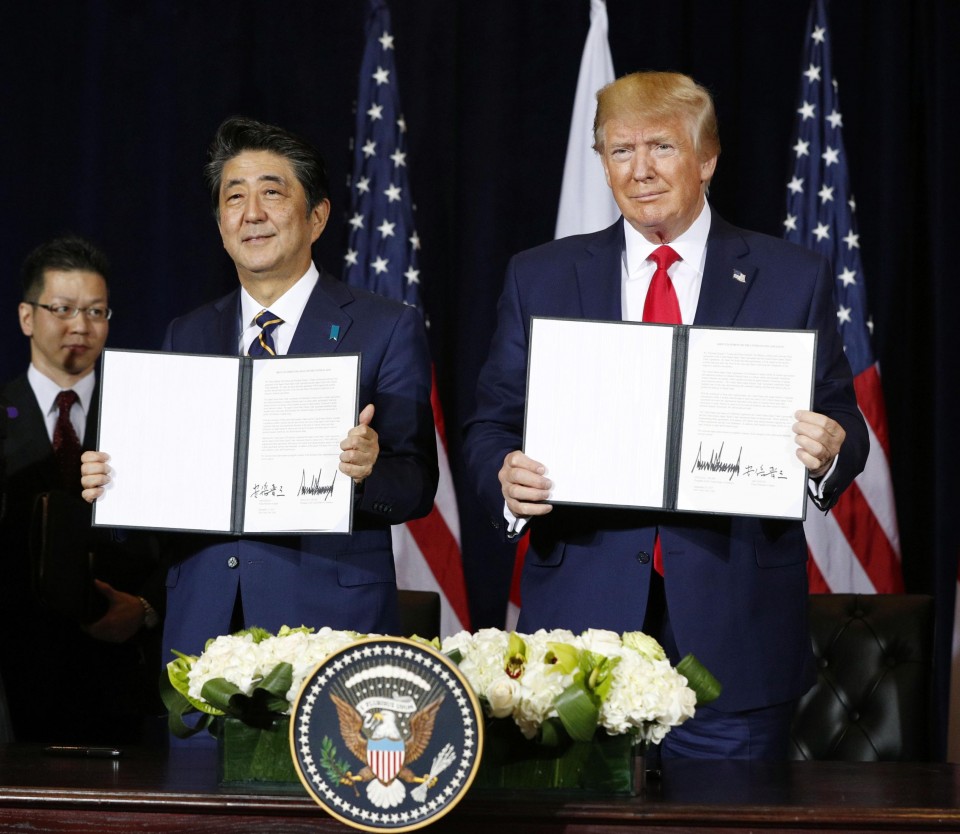 Still, the United States will maintain its current 2.5 percent tariff on U.S.-bound Japanese vehicles and auto parts. The two countries will carry out further negotiations over cars and auto parts, according to the Japanese government.

Since Abe and Trump agreed a year ago to launch bilateral talks, Japan has maintained it would not commit to bigger concessions than those already made in existing free trade agreements, such as the revised 11-member TPP, as it fought to protect the interests of domestic farmers.

Japan appears to have won U.S. concessions on rice, a politically sensitive area for the country, offering no tariff-free quota for American rice.

A maximum 70,000 tons a year would have been set had the United States stayed in the original TPP that the administration of former President Barack Obama signed with Japan and 10 other regional economies in 2016.

The new agreement also paves the way for more Japanese beef to enter the U.S. market by removing the current low-tariff quota set at 200 tons a year. Japanese beef will be included in a larger quota combined with other nations and set at 65,000 tons annually.

(Miya Tanaka contributed to this report.)

Gist of the Japan-U.S. agreement on trade

The following is the gist of a bilateral trade agreement reached by the United States and Japan on Wednesday.

-- Japan to eliminate or reduce tariffs on $7.2 billion worth of U.S. food and agricultural products.

-- Japan to reduce or eliminate tariffs to around the same level as seen in the Trans-Pacific Partnership pact, of which Washington was a signatory, for U.S. beef, pork, wheat, some dairy products and wine. The United States withdrew from the TPP under President Donald Trump.

-- Japan not to offer the United States a tariff-free rice quota of up to 70,000 tons a year as it had originally agreed in the TPP.

-- The United States to increase its low-tariff quota for Japanese beef from the current 200 tons per year.

-- The United States to maintain its current 2.5 percent tariff on Japanese cars and auto parts.

-- Japan to be exempted from being slapped with higher auto tariffs on national security grounds.