Tsurui, like many other villages in Hokkaido, is dotted with dairy farms. Unlike some other aging farming communities across Japan, however, Tsurui stands out with its collection of unique and colorful farm entrance signs.

One of the signboards, for example, features a humorous illustration of a grinning cow with gleaming white teeth and a towel headband. The eye-catching pink sign was set up in May at Shimizu Farm, which raises about 270 dairy cattle in Tsurui.

"The cow, that's me!" Takeshi Shimizu, the farm's 37-year-old owner, said with a hearty laugh. 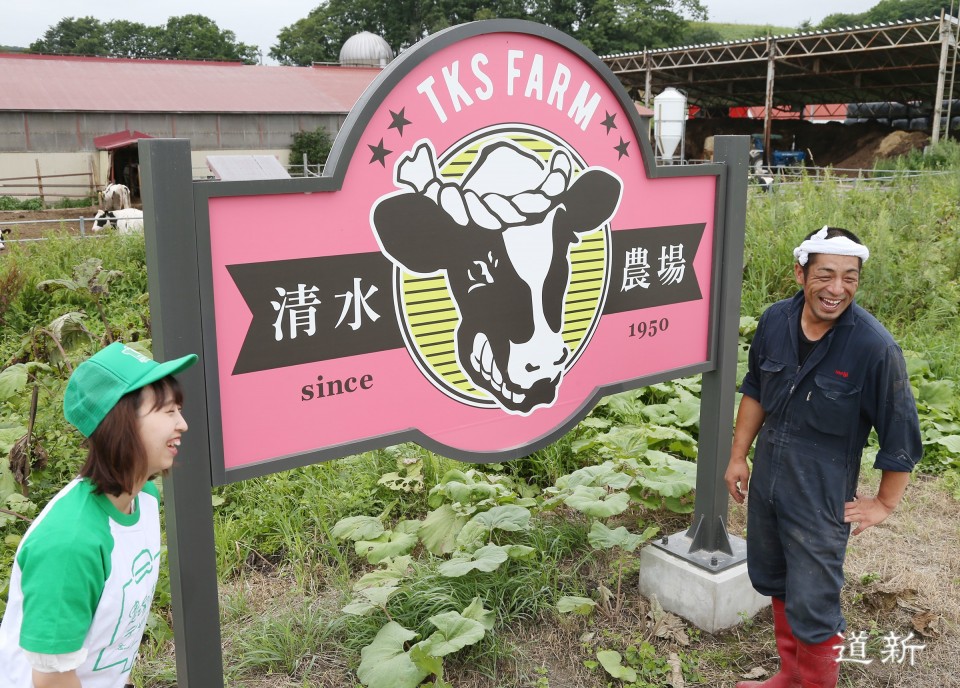 Shimizu wore his trademark "nejirihachimaki" twisted towel headband, just like the one featured on the sign. Pink, his favorite color, matches the roof of the farm’s new cattle barn that was completed in January.

Shimizu had asked Ayaka Hamano of marketing company Hamano Sales Promotion Planning Co. in Kushiro to produce the signboard, as he wanted something unique to promote his farm's originality.

Hamano, herself born to and raised in a dairy farming family in Tsurui, had designed a logo for her family's farm when her younger brother took over the business in 2016.

The logo, featuring a cow illustration with bright blue and red colors, was placed on her family farm's signboard and the walls of its barn and soon caught the attention of others in the village.

Hamano, 37, soon received requests from other dairy farmers in Tsurui and began making farm signs in earnest in the summer of 2017.

When designing farm signage, Hamano's company first interviews their client such as on the farm's history and how they succeeded in the business, in addition to the client's preferred colors, shapes and other elements to be reflected in the design.

For example, for a third-generation farm owner, the signboard featured the wheel of an old pull cart used by the farm's founder.

Until now, farmers usually placed orders for signboards with local agricultural cooperatives. According to Hamano and JA Kushirotancho, where 69 Tsurui farmers are members, each cooperative has a template design and there are limited options of fonts and colors that farmers could choose from for their logos.

"People tend to lump all dairy farmers together as one, but in fact, each and every farm is unique, just as different companies are," said Hamano.

Hamano's company charges design fees from 100,000 yen and up, and has produced signboards for six farms in the village over the past two years. The company has also designed signs for eight dairy farms in Tokachi, Okhotsk and other areas in Hokkaido.