Georgia lived up to their reputation as powerful scrummagers as they outmuscled Uruguay 33-7 on Sunday, earning their first win and a bonus point from scoring five tries in the Rugby World Cup Pool D clash.

The Georgians opened the scoring in the eighth minute at Kumagaya Rugby Stadium, with winger Alexander Todua crossing in the corner after the Lelos quickly moved the ball to the left following a sequence of penalties and scrums five meters from the line.

Georgia's front-row pressure generated another try 21 minutes later, with captain and hooker Jaba Bregvadze leading the way before man-of-the-match Otari Giorgadze picked up the ball to score. Tedo Abzhandadze successfully converted to push their lead to 12-0. 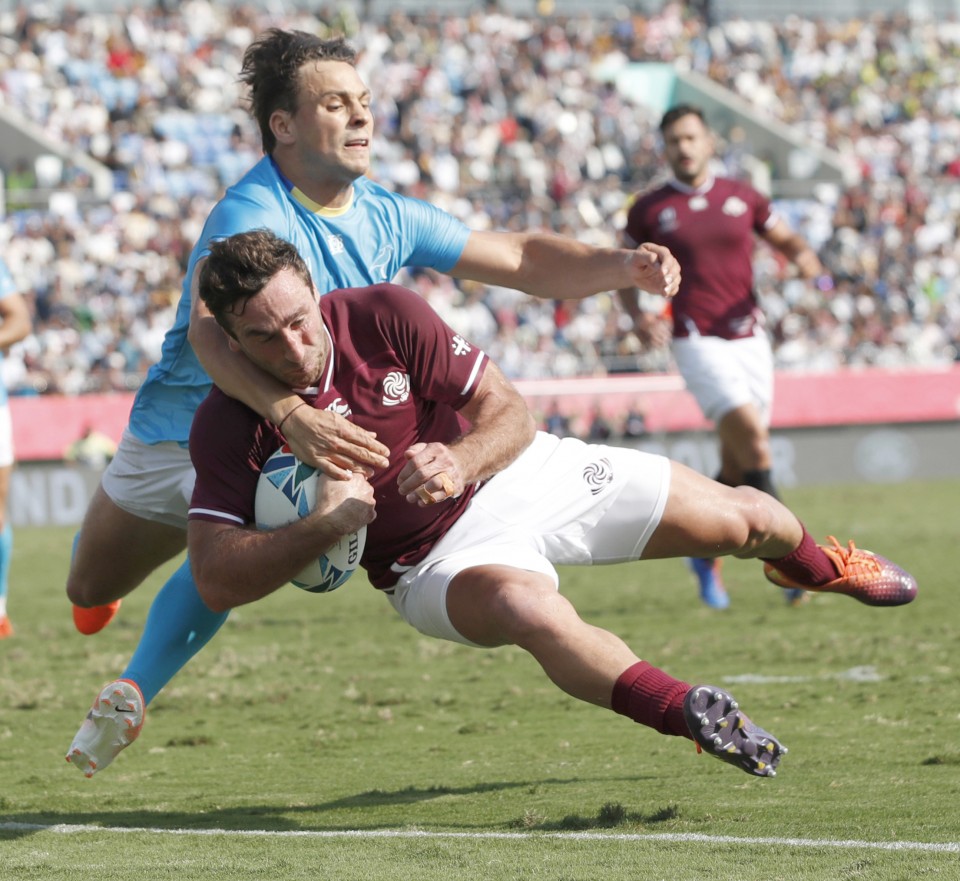 (Alexander Todua (R) of Georgia opens the scoring with a try during the first half of a Rugby World Cup Pool D match against Uruguay.)

Uruguay struck back soon after, with Andres Vilaseca jolting through a loose Georgian defense. Felipe Berchesi, who scored 15 points in Uruguay's unexpected 30-27 win over Fiji earlier in the week, added the conversion, but the South Americans' scoring stopped there.

A familiar face in Japan from his time with Tokyo-based Super Rugby side Sunwolves, Bregvadze further extended the lead with a try of his own from a powerful rolling maul in the second half.

"It was important for us to get this first win out of the way," said Georgia head coach Milton Haig, who takes over at Japan Top League side Suntory Sungoliath in November after leading the Lelos at two World Cups.

"We've worked so hard over the last four months -- even four years really -- so (I'm) pretty stoked about getting the job done," he said. 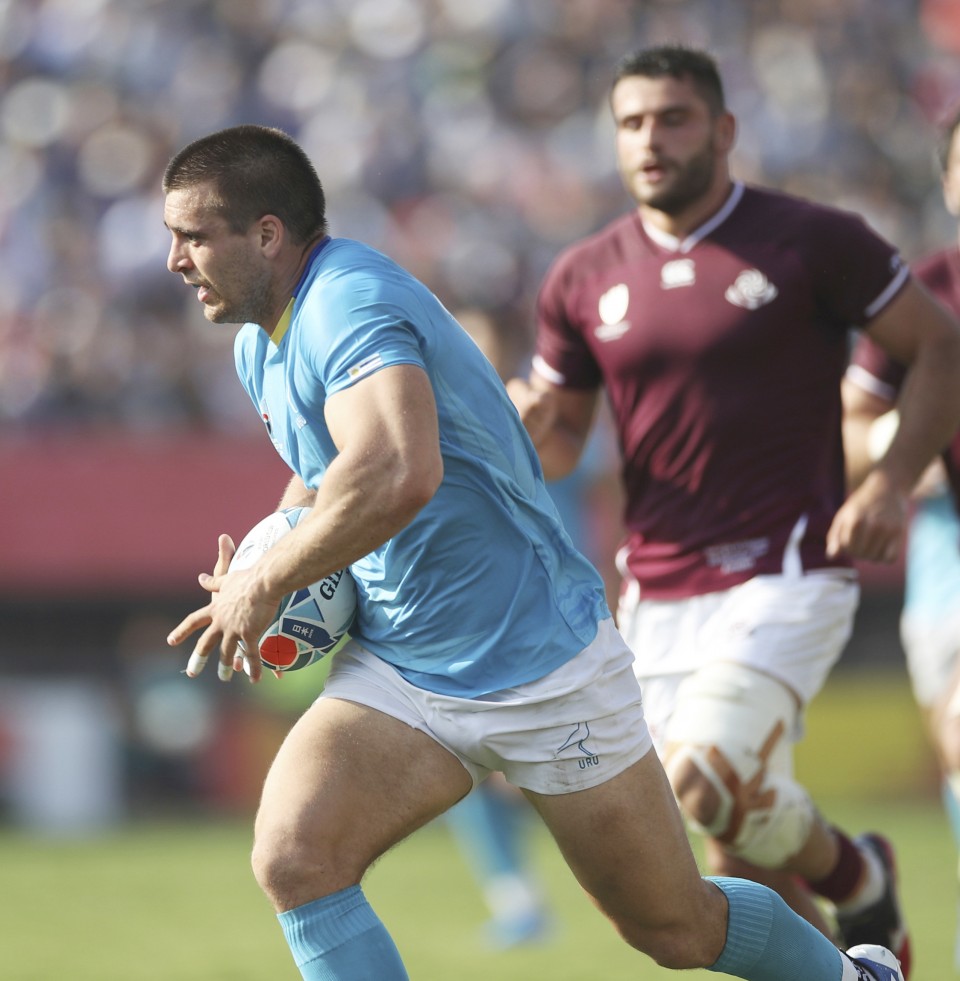 (Andres Vilaseca of Uruguay runs with the ball on his way to scoring a try during the first half of a Rugby World Cup Pool D match against Georgia.)

"It was always difficult for them to last 80 minutes. Tough is tough, but we just kept on doing what we are doing," he said, referring to Uruguay's three-day turnaround after Wednesday's game against Fiji.

Thousands of Japanese school children among a crowd of 24,895 cheered for both teams on a hot day in Kumagaya, near Tokyo, while the afternoon sun sometimes blinded players and spectators alike.

With the win, Georgia, who lost to Wales on Sept. 23 in their opening match, kept alive their hopes for finishing third in the pool and earning automatic qualification for the next World Cup in 2023. Fiji, Wales and Australia are also grouped in Pool D.

Uruguay failed to repeat their heroics from the tournament's first upset against Fiji. The South Americans will face Australia on Saturday, and Wales eight days later in their quest to earn two victories at a single World Cup for the first time. 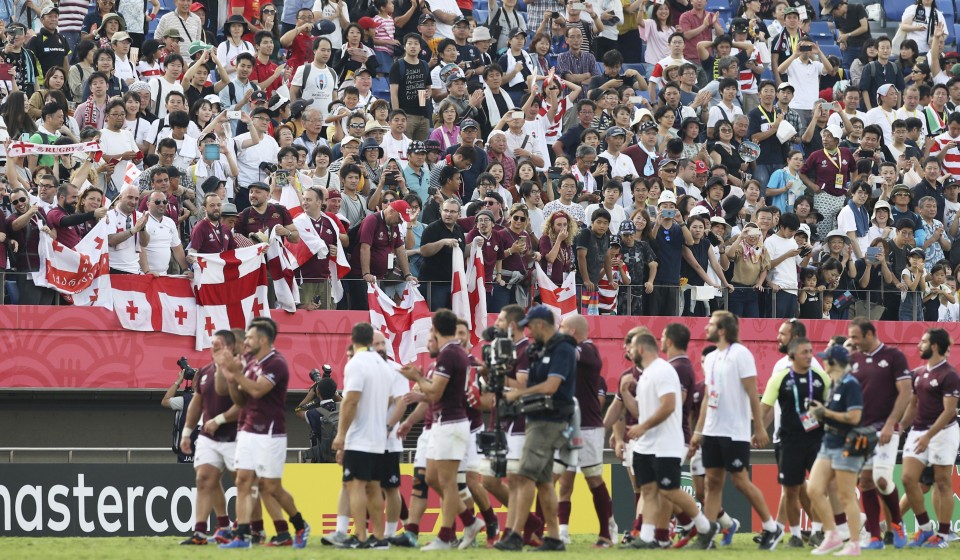 "The result (is more disappointing) because it's a consequence of us losing the ball," said Uruguay head coach Esteban Meneses. "We were always under pressure by Georgia. Georgia are very good in the scrum and line maul. We need to improve in these areas."

"We're a very good team and we have very good players and they've shocked the world once (in the win against Fiji), why not again against Australia or Wales?"