As Japan welcomes more foreign workers under a new visa system introduced in April, a city neighboring Tokyo with a large foreign population is taking steps to help such workers' children overcome the language barrier in school.

In Kawasaki city's Kawasaki Ward, municipal authorities teamed up with Seikyu-sha, a social welfare service provider, to jointly host a summer school this year for junior high school students who have come to Japan within the past three years. 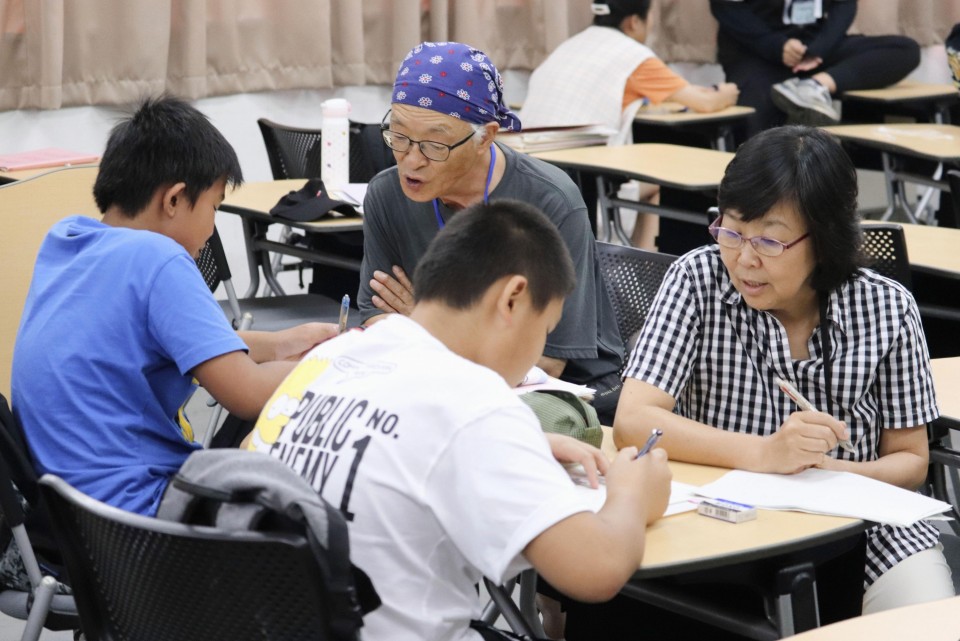 (A summer school in Kawasaki for junior high school students who have come to Japan within the past three years.)

As of late June, the ward was home to nearly 40 percent of Kawasaki city's 44,000 foreign residents. At the summer school, retired teachers offered the children help in doing homework and writing essays in Japanese.

Also pitching in to offer advice and encouragement were former high school students as well as university students who had struggled to learn Japanese themselves as children after spending long periods of their early lives outside Japan.

"If you cannot use the language, the chances of entering a university or getting a job will be low. I don't want you to give up," Seisho Sasaki, 24, a fourth-year student of Kanagawa University, told some 20 junior high school students attending the summer school on Aug. 1.

Now fluent in Japanese, Sasaki only came to Japan in 2012 after being brought up in China, where his mother was born, and graduating from a junior high school there.

A male high school student with a Chinese parent also gave a talk on his struggles to adapt to Japanese society.

"I didn't know what the teachers were saying in class at first. But I passed the high school exam with the teachers' support and by meeting people who had the same worries as me at my school and in the local community," said the male student.

Seikyu-sha has been helping foreign children learn Japanese since 2004 in Kawasaki Ward. The group's achievement was acknowledged by the municipality and they started collaborating this year.

"It is hard to keep up in class when students come to Japan in the upper grades of elementary school or junior high school," said Chiyoko Hara, a 62-year-old senior official of Seikyu-sha.

Out of 166 elementary and junior high schools run by the Kawasaki city government, 27 have special Japanese classes to support foreign children, up from eight in 2015. "But we need even more support," Hara said.

In the city's Nakahara Ward, which hosts the second largest community of foreign residents after Kawasaki Ward, the city's education board and local residents jointly established last year a "terakoya," originally meaning a temple school, to support the education of foreign children.

There were only two participants at first but their number has increased to 10. At traditional terakoya set up in the Edo Period (1603-1868), the children of commoners were taught reading, writing and "soroban" Japanese abacus.

In August, an event was held to train teachers with 14 people, including retired teachers and housewives, participating.

"Children who cannot communicate in Japanese tend to be isolated but they still want to be acknowledged by others. I want the teachers to support them in finding motivation to study and make friends," said Makoto Kunishima, 65, lecturer at the session.

Even after retirement, Kunishima teaches at the city-run Saginuma Elementary School and is in charge of a class that supports foreign children.

In April, the Japanese government opened the doors wider to foreign workers in a major policy shift to tackle an acute labor shortage amid the rapid aging of the population.