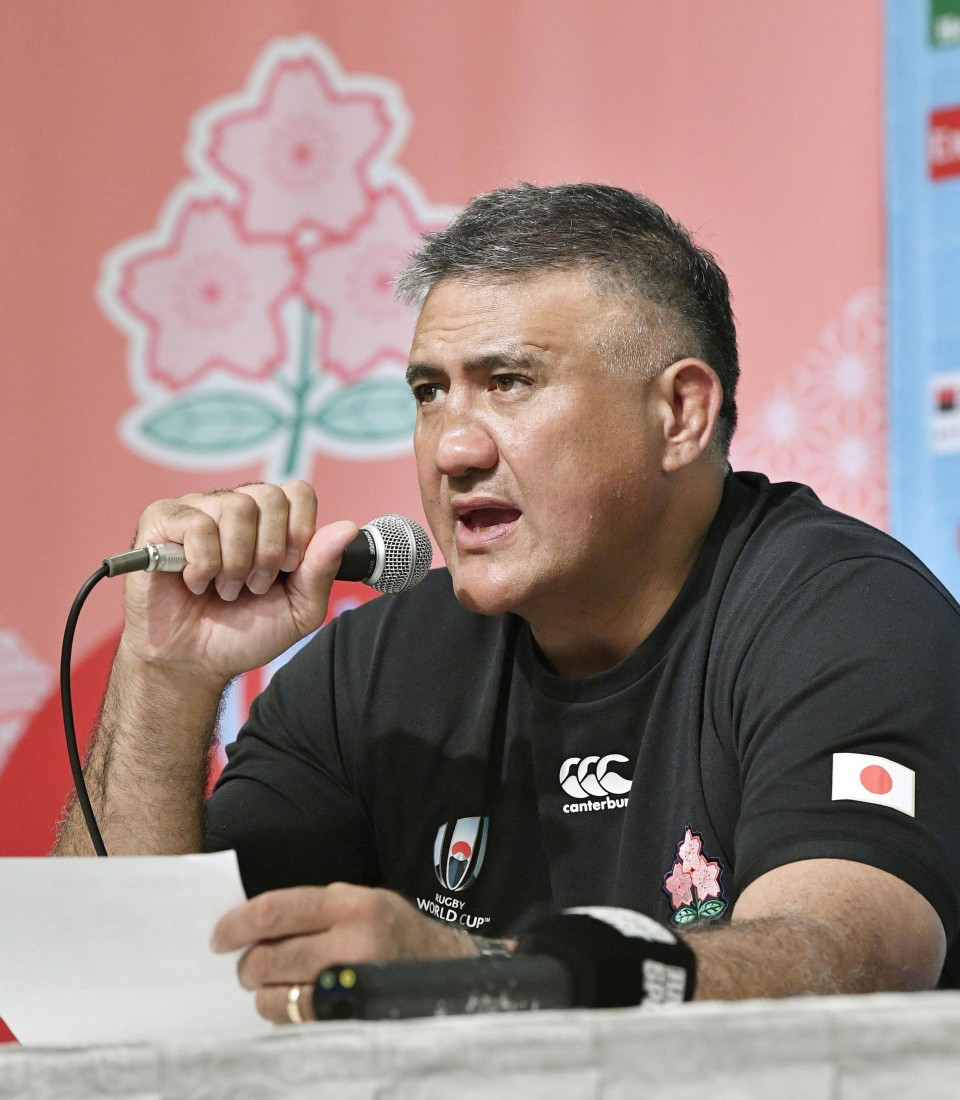 TOKYO - Japan coach Jamie Joseph sprung a surprise Wednesday, opting not to pick his main strike runner and leaving a trio of his most experienced players on the bench in his side for their Rugby World Cup opener against Russia.

Michael Leitch will become the second player, following Takuro Miuchi, to captain the Brave Blossoms at two World Cups when he leads a side on Friday night at Tokyo Stadium (Ajinomoto Stadium) that includes Kazuki Himeno at No. 8 rather than Amanaki Lelei Mafi, and Luke Thompson, Hendrik Tui and Fumiaki Tanaka on the bench.

"He's not injured," Joseph said of hard-running No. 8 Mafi, who was forced from the field during the Sept. 6 warm-up game with South Africa with a shoulder injury. "(But) he didn't participate fully at the start of the week and we want our players to have the right preparation."

Leitch said Himeno's ball carrying and ability to perform under pressure would help the team, while Joseph said the decision to pick the 25-year-old Toyota Verblitz captain "gives an opportunity for a player like Tui to go on the bench and see whether he can offer an impact off the bench that we know he has done before." It also "allows Mafi a few extra days" to make sure he is ready to play against Ireland on Sept. 28.

Leitch and Himeno are joined by Pieter "Lappies" Labuschagne in the back row with James Moore and Wimpie van der Walt in the engine room and Keita Inagaki, Shota Horie and Asaeli Ai Valu in the front row.

Yutaka Nagare and Yu Tamura pair at halfback with Ryoto Nakamura and Timothy Lafaele in the centers and Lomano Lava Lemeki, Kotaro Matsushima and William Tupou making up the back three.

"We believe Nagare is one of our leaders and a very good communicator and we feel we need that skill set going into a test match in which there is a lot of expectation and pressure," Joseph said of his scrumhalf.

Japan were forced to work very hard to beat Russia 32-27 when they last met in November 2018 in Gloucester, England. And perhaps with that in mind Joseph has packed some experience campaigners, including Tanaka, among the replacements.

"Fumi is in his third World Cup and been there and done that and he's played at the highest level," said Joseph. "We like the feel of an experienced nine coming on at what could be a very vital part of the game."

Those comments are equally applicable to flanker Tui and lock Thompson, who is set to become not only the oldest player to represent Japan in the competition but also the first Brave Blossoms to play in four Rugby World Cups.

Also included among the replacements are Koo Ji Won and Ryohei Yamanaka.

Koo is set to become the second South Korea-born player to feature at a World Cup, following Kim Chul Won, who represented Japan in two matches in 2007. Yamanaka missed out on the 2011 tournament after a cream he was using in an attempt to grow a moustache contained a banned substance.

"The players are really excited. They have been waiting a long time as everybody has in Japan for this day to arrive," said Joseph.