South Korea's two largest metropolises on Friday each adopted an ordinance labelling as "war crime companies" certain Japanese firms over their purported use of forced labor or production of military supplies during World War II.

The legislative body of the southern port city of Busan passed its measure in the morning, becoming the first municipality in the country to do so, and the Seoul Metropolitan Council of the capital followed suit in the afternoon.

Their decisions come as bilateral ties are increasingly strained over historical and territorial disputes. It is unclear how the ordinances will be applied in the future and whether they will have an actual impact on the companies concerned.

Under the nonbinding ordinances, 284 Japanese companies including Mitsubishi Heavy Industries Ltd. are to be given the designation, with the mayors and other officials of the cities being requested not to purchase products from them in the future.

In the case of Busan, there is also a provision that stickers saying "product of a war crime company" be attached to products that have already been purchased. 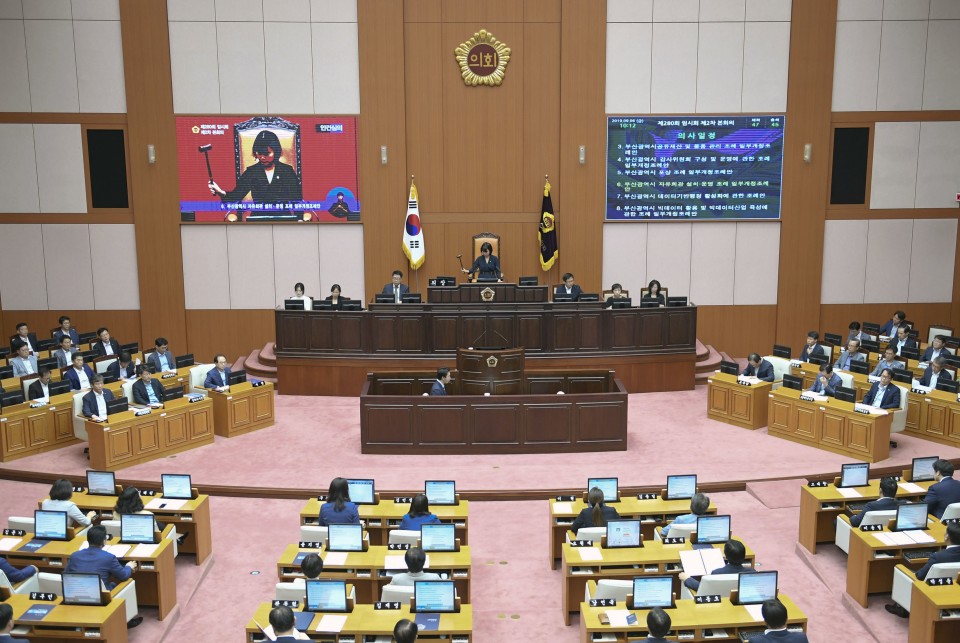 The Japanese firms are on a list, drawn up in 2012 by the South Korean prime minister's office, of companies it said committed "war crimes" against Koreans.

Commenting on the Busan ordinance in Tokyo, Chief Cabinet Secretary Yoshihide Suga, the top government spokesman, slammed it as being "based on an inappropriate and irrational claim."

"Such an ordinance takes aim at certain Japanese companies and could inflict economic damage. It's extremely regrettable," he told a press conference.

Mitsubishi Heavy is one of the Japanese enterprises ordered by South Korean courts last year to compensate Koreans who claimed they had been victims of forced labor.

The companies have refused to comply in line with Japan's stance that South Korea waived its rights to compensation under a 1965 accord accompanying a treaty that set up diplomatic relations between the countries.

Similar bills have been submitted in other city councils but were rejected due to worries they could further worsen ties between South Korea and Japan, inflamed by the court rulings and an ongoing trade spat.

Even so, calls by politicians for boycotts of Japanese products have drawn criticism in some quarters as pandering to the public.

According to the Chosun Ilbo, a major South Korean daily, when the proposal was first submitted, some members of the Seoul legislature voiced opposition, saying restricting bidding qualifications against companies because of their actions during the war may be against the law.

The move appears aimed at giving legal protection to the installation of controversial statues in front of the city's Japanese consulate.

Earlier this year, authorities in the port city removed a statue symbolizing Korean victims of forced labor that had been erected by a civic group in front of the consulate.

In 2017, the city adopted an ordinance allowing it to protect statues symbolizing so-called comfort women who were forced to work in Japan's wartime military brothels.