A team of five Japanese won the spoof Ig Nobel chemistry prize on Thursday for their study estimating the daily saliva volume produced by a five-year-old child.

Shigeru Watanabe, a professor of pediatric dentistry at the School of Health Sciences at Meikai University in Japan, accepted the prize on behalf of his team at the 29th First Annual Ig Nobel Prize Ceremony at Harvard University in Cambridge, Massachusetts.

The other, absent, recipients were Mineko Ohnishi, Kaori Imai, Eiji Kawano and Seiji Igarashi. It marks the 13th consecutive year a Japanese national has won an Ig Nobel prize.

The quintet were a part of the study "Estimation of the total saliva volume produced per day in five-year-old children" that was published at Hokkaido University, in February 1995.

The 68-year-old Watanabe was accompanied by his sons, who were among the 15 boys and 15 girls used as test subjects for the experiment conducted some 35 years ago.

Watanabe received his prizes -- a trophy made out of a coffee cup, a Zimbabwean 10 trillion dollar bill and a certificate -- from the 1993 Physiology or Medicine Nobel Laureate Richard Roberts, who discovered "split genes." 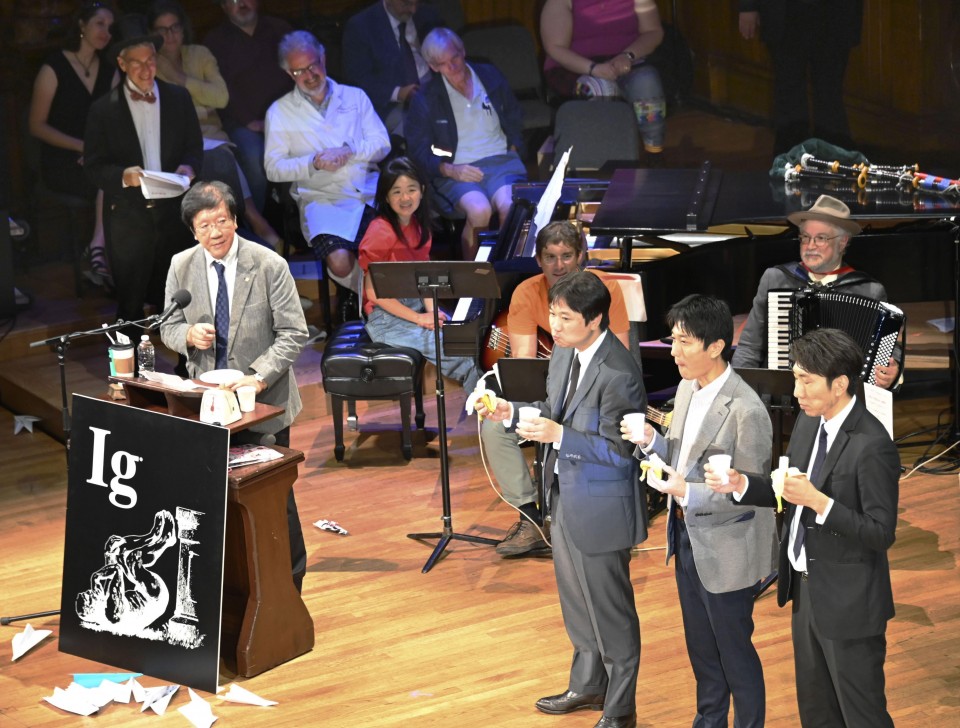 "We found out an important fact, that the total saliva volume per day in five-year-old children is 500 milliliters," he told about 1,100 audience members at Sanders Theater.

While on stage for the allotted 60 seconds, his son attempted to demonstrate the experiment at the instruction of his father before running out of time. "Okay, eat. Chew, chew, chew, chew, and spit out."

At the beginning of the experiment conducted in the 1980s, the collegiate team measured "unstimulated" saliva by having the children drip their saliva for five minutes into a container to be weighed.

The children also chewed and spat out six types of food for the professors to determine "salivary flow rates" when eating.

For the next two days, the team recorded the amount of time the children were awake, asleep, eating meals and snacking.

By determining the rates of saliva flow when "unstimulated" and when eating, they were able to estimate that a five-year-old child produces about 500 milliliters of saliva per day.

The chemistry prize was one of 10 handed out at the ceremony, which had the theme of "habits." The biology award went to an international team for its discovery that dead cockroaches remain magnetized longer than living ones.