Three former executives of Tokyo Electric Power Company Holdings Inc. were acquitted Thursday on charges of failing to prevent the Fukushima nuclear disaster, triggered by the 2011 earthquake and tsunami in northeastern Japan.

"It would be impossible to operate a nuclear plant if operators were obliged to predict every possibility related to tsunami and take necessary measures," Kenichi Nagafuchi, presiding judge of the Tokyo District Court, said in handing down the ruling in the first and only criminal trial over the nuclear crisis.

At the court, former TEPCO Chairman Tsunehisa Katsumata, 79, along with Ichiro Takekuro, 73, and Sakae Muto, 69, both former vice presidents, had argued they could not have foreseen the massive tsunami that crippled the Fukushima Daiichi power plant and caused core meltdowns.

The three were indicted for failing to implement tsunami countermeasures leading to the deaths of 44 people -- including patients forced to evacuate from a hospital -- as well as injuries to 13 people in hydrogen explosions at the plant. 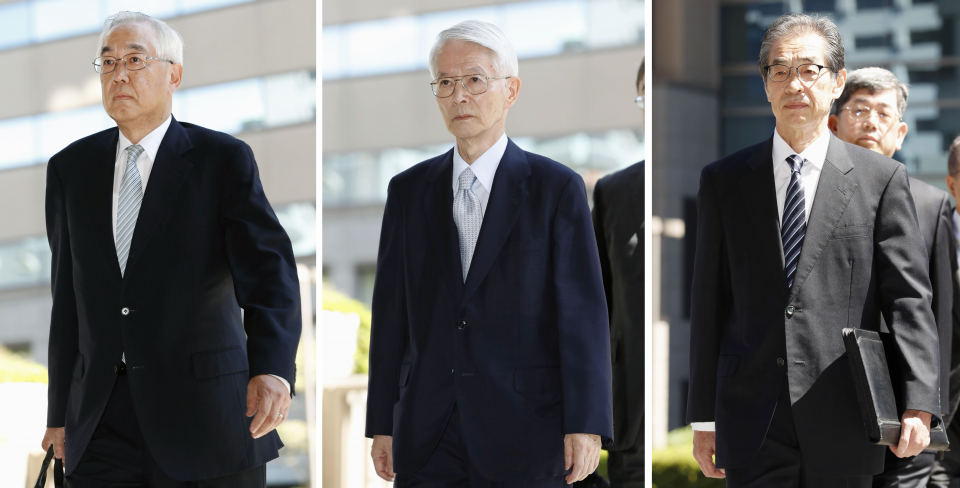 Speaking at a news conference after the ruling, Ruiko Muto, leader of the plaintiffs, expressed anger, saying, "It was just disappointing. Not one person in Fukushima can accept (the ruling)."

Lawyer Hiroyuki Kawai said the ruling was sympathetic to pro-nuclear forces. "The judges have absolutely no understanding of the horrors and danger of a nuclear disaster," Kawai said.

Court-appointed lawyers acting as prosecutors had called for five-year prison terms for the three, claiming they would have prevented the nuclear disaster if they had fulfilled their responsibility to collect information and implement safety measures. 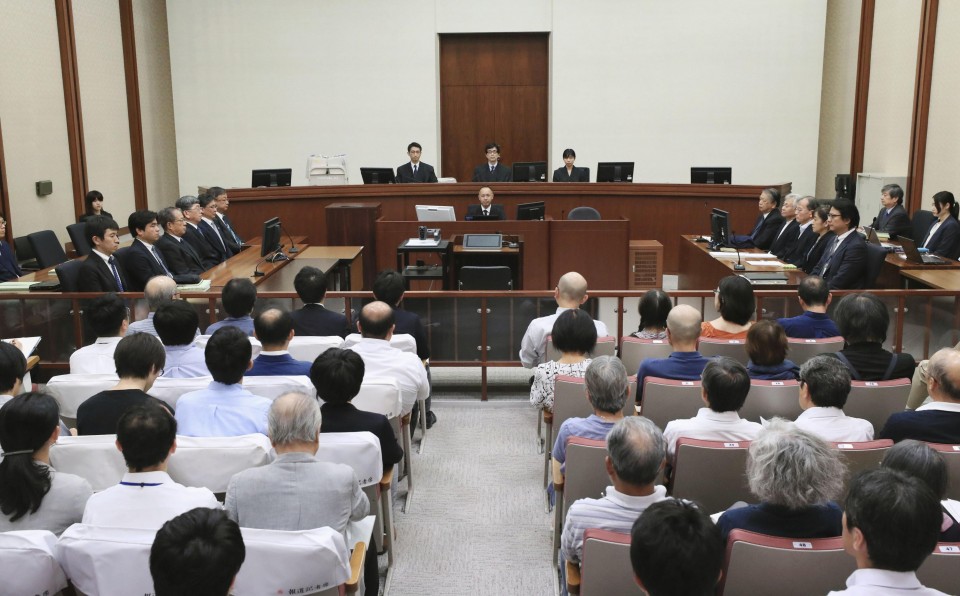 Cries were heard among disaster victims and others gathered in front of the district court when a placard was raised with the words "All found not guilty. Unjust ruling."

"The understanding of the judges is divorced from that of the citizens. A heartless, irresponsible ruling such as this is intolerable," said Masakatsu Kanno, whose father's death was recognized as linked to the disaster.

Like the 75-year-old Kanno, who traveled to the court for more than two hours from the home he was relocated to in Mito, Ibaraki Prefecture, many people had assembled to hear the verdict, with 835 queuing for the 45 seats in the court that were open to the public.

The three former TEPCO executives were charged in 2016 with professional negligence resulting in death and injury by the court-appointed lawyers after an independent panel of citizens mandated indictment.

The panel's decision came after Tokyo prosecutors twice decided not to charge the men over the world's worst nuclear crisis since the 1986 Chernobyl disaster.

The trial focused on whether the former executives should have foreseen the massive tsunami and prevented the accident, given that it was calculated tsunami waves of up to 15.7 meters could strike the Fukushima plant based on the government's long-term evaluation of quake risks in 2002. The estimate was reported to TEPCO in 2008.

The defense team argued the three could not have envisaged tsunami waves on the scale of those that hit the plant based on the government evaluation -- which the former executives considered unreliable -- and said installing coastal levees would not have prevented the disaster.

Regarding the government's quake estimate, Thursday's ruling said, "It is difficult to say there were sufficient grounds," adding, the three executives were not specifically aware of the possibility that a tsunami exceeding the 10-meter-elevation of the plant premises could strike.

"We once again offer our sincerest apologies for causing great trouble and worries to many people, including people in Fukushima Prefecture," TEPCO said in a statement after the ruling.

"Starting with Fukushima's reconstruction, we are putting all efforts" into providing compensation for damage related to the disaster, decommissioning work and decontamination, the utility said, adding it is determined to reinforce safety measures at nuclear power plants.

But Suga, the chief Cabinet secretary, said, "The government should play a role so that such an accident will never take place again," based on the lessons of the disaster at the Fukushima Daiichi nuclear plant.

Nos. 1 to 3 reactors subsequently suffered core meltdowns, while hydrogen explosions damaged the buildings housing the Nos. 1, 3 and 4 units. Around 160,000 people were evacuated at one point.

Apart from the criminal trial, some rulings in around 30 damages suits filed by disaster victims seeking compensation from the state and TEPCO have determined that the utility could have predicted the tsunami and prevented the disaster.

In the first such civil ruling in March 2017, the Maebashi District Court said the government's quake estimate was "reasonable" and acknowledged TEPCO could have avoided the disaster if it had taken appropriate measures.

"The criminal trial was challenging because it required specific predictability and strict evidence without any doubt," said Tsutomu Yonekura, the chief secretary of a group of lawyers representing victims of the Fukushima nuclear disaster.

"However, even if (the executives) were found not guilty, it doesn't mean the company escapes its responsibility to compensate," Yonekura said. 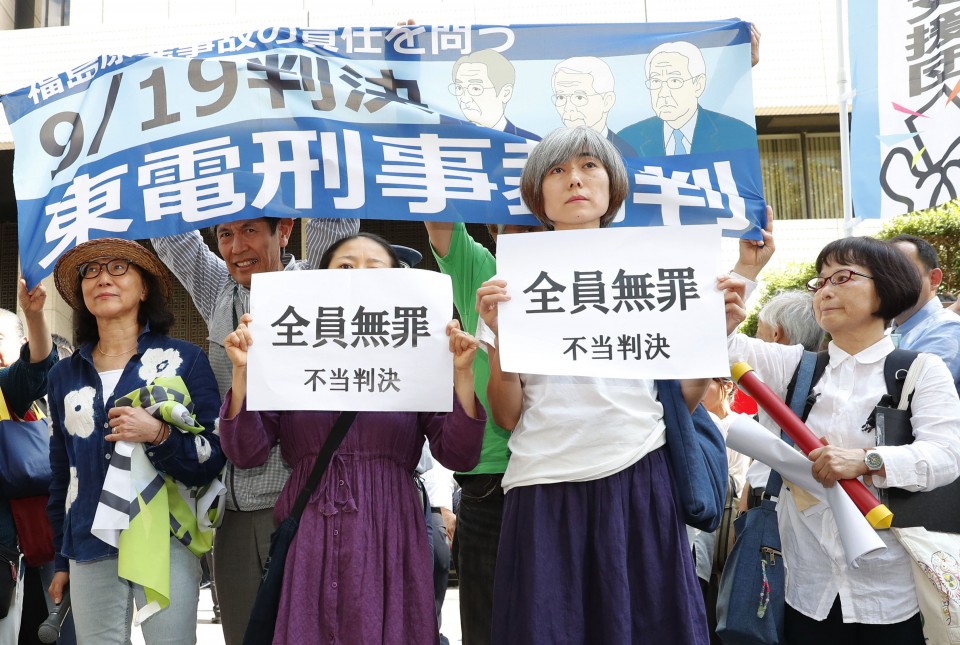 March 18, 2008 -- TEPCO is informed by one of its subsidiaries of the possibility that a tsunami as high as 15.7 meters could hit the plant, an estimate based on the long-term risk evaluation.

March 12-15 -- Hydrogen explosions occur at Nos. 1, 3 and 4 reactor buildings. Many inpatients at local hospitals are forced to evacuate and later die.

June 11, 2012 -- Group files criminal complaint against then-TEPCO Chairman Tsunehisa Katsumata and 32 others with the Fukushima District Public Prosecutors Office alleging professional negligence resulting in deaths and injuries in connection with the inpatients as well as workers at the plant killed or hurt in the disaster, saying the TEPCO officials were responsible for the nuclear calamity. Fukushima prosecutors later transfer cases to Tokyo counterparts.

Sept. 9, 2013 -- Tokyo prosecutors decide not to indict Katsumata and others.

Oct. 16 -- Group which filed criminal complaint asks for a committee for inquest of prosecution, an independent judicial panel of citizens, to review decision not to prosecute.

July 23, 2014 -- The 11-member Tokyo No. 5 Committee for Inquest of Prosecution votes in favor of indicting Katsumata and two other former TEPCO executives.

July 17 -- Tokyo No. 5 prosecution inquest panel votes again in favor of charging the three, with decision making their indictment mandatory.

June 30, 2017 -- The three plead not guilty at their first trial at the Tokyo District Court.