The foreign ministers of Japan and the Association of Southeast Asian Nations on Thursday shared their concerns about the situation in the South China Sea, in a veiled criticism of China's military buildup in the disputed waters.

Kono was quoted by the official as saying the situation "has been deteriorating every year" and that Japan shares ASEAN's worries.

Despite Minh's reference to "serious concerns" about the dispute with China, ASEAN foreign ministers failed Wednesday to send a unified message on the issue, apparently due to opposition from countries such as Cambodia and Laos that do not want to provoke Beijing.

In Thursday's meeting, Kono urged relevant countries to ensure a peaceful resolution to the dispute and called for demilitarization of the waters, the Japanese official said.

Neither Kono nor Minh singled out China in their remarks. 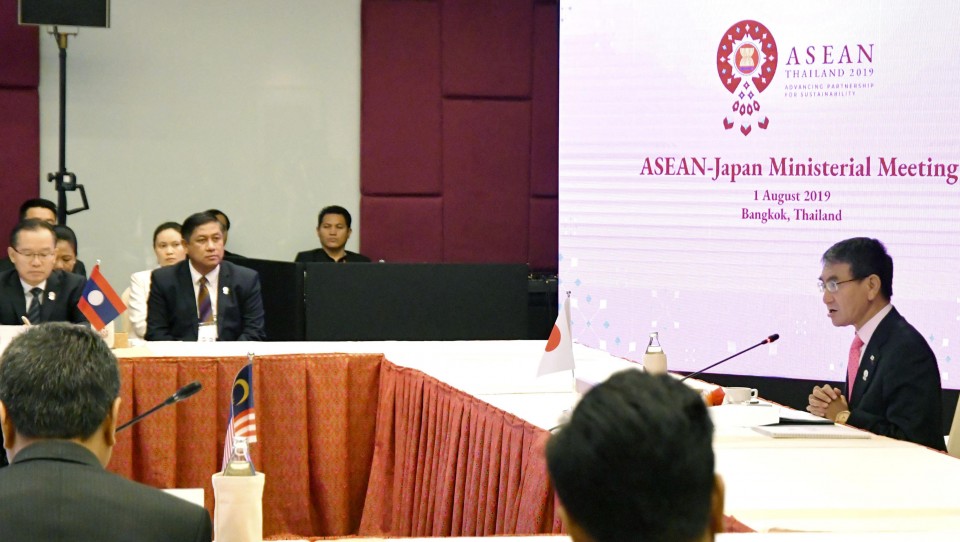 Tensions have flared anew after it was revealed last month that China test-fired anti-ship ballistic missiles in disputed areas of the South China Sea.

China has conflicting territorial claims with four ASEAN members -- Brunei, Malaysia, the Philippines and Vietnam -- as well as Taiwan in the South China Sea, a strategic waterway through which more than a third of global trade passes.

In addition, Kono and his ASEAN counterparts agreed to maintain U.N. sanctions on North Korea in an effort to compel the country to give up its nuclear weapons program, according to the Japanese official.

The ASEAN ministers backed Japan's efforts to resolve the issue of Japanese nationals abducted by North Korea in the 1970s and 1980s.

Kono said Japan wants to cooperate with the 10-nation bloc in promoting a vison of a free and open Indo-Pacific based on the rule of law.