Muted in country of their birth, three women try to find their voice

One is Korean, one is Chinese and the other is Japanese, but they all want to make the country they call home a more progressive, inclusive and representative place.

All three look like they could be any other young professional walking the streets of Japan's capital, but when they speak they demonstrate a thoughtfulness that makes it obvious they have different motivations to most.

"I think, even like a few decades ago, it would be impossible for us to be having discussions and dialogue about how we want the future of Japan to be," says Amy Tiffany Loo, 23.

Loo, the Chinese member of the trio, says the difficult history of relations between her ancestral homeland and those of her friends -- Korean Chung Woohi, 25, and Japanese Yuka Hamanaka, 23 -- means any discussion about a collective future in Japan would have been out of the question not so long ago. 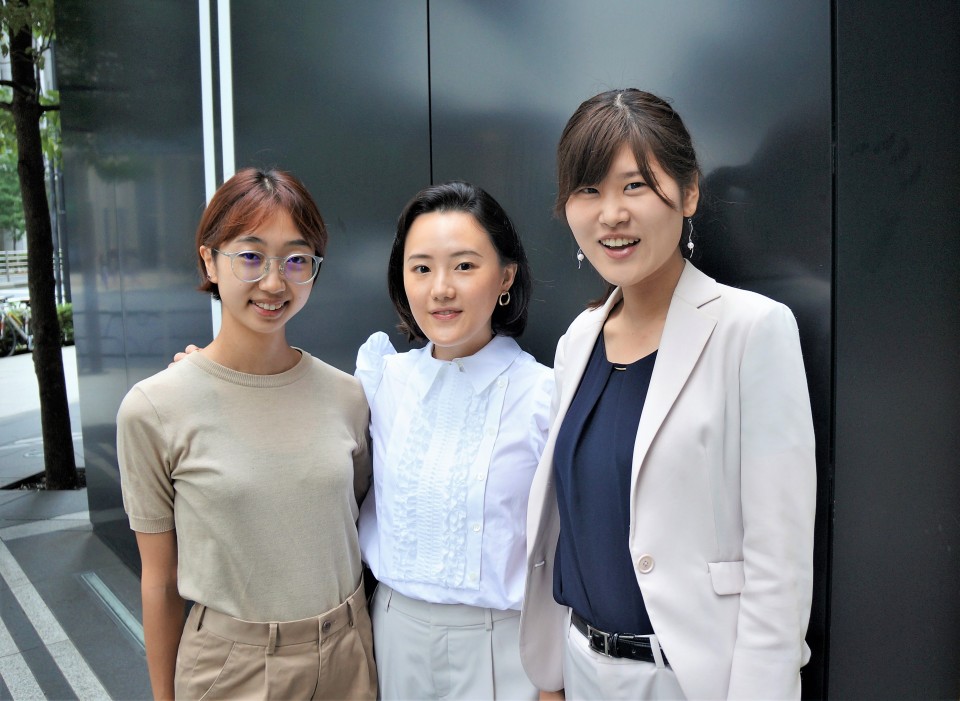 "Woohi is 'zainichi' Korean, my family has been through a lot of upheavals through the Sino-Japanese war, and Yuka, she is a Japanese national, so when we engage in conversation we always talk about how we can think and discuss issues in a way that encompasses all three sides of us," said Loo.

"The way we view history, it is very different. Me, coming from a Chinese background whose grandparents fought Japanese forces, it is going to be a very sensitive issue."

Their varying ancestral histories may bring them into contrast, and even conflict sometimes, but their current shared realities in the country of their birth also gives them plenty in common.

As foreigners in their own country, the issue of representation is one that is particularly important to Chung and Loo, and it led them to evaluate the issue of voting rights for non-Japanese nationals ahead of the recent upper house election.

"There is a tendency for others to simplify us or to force us into a corner," said Loo, a graduate of University of California Berkeley and now a consultant at a large multinational professional services company.

"But in our case, we have lived in Japan for over 15 to 20 years...And so, for us, we feel the same things that Japanese people feel. We care about gender inequality, we care about the right of disabled people, we care about children," she said.

But as much as they care, they, like the rest of the more than 2.73 million foreigners living in Japan, have no way to voice their opinion by casting a vote for a candidate or party that represents their best interests.

"In the season of the election many people around me they always say 'I voted' or 'let's go vote,' but my frustration was that I was unable to join that voice," said Chung, an artist, activist and office worker.

Without a voice and with issues of great frustration at the current Japanese leadership's attitude toward some Korea-related issues, Chung came together with her friends to start the #VoteForMe social media campaign.

"This campaign started from my personal frustration, I guess. I felt this kind of frustration because I have no right to vote in Japan even though I was born in Japan and grew up in Japan," said Chung.

The women hoped the social media campaign would raise awareness about Japan's disenfranchised among those who have a vote, making them realize that their vote is both valuable and has even more significance to those without a voice.

Ha Kyung Hee, an assistant professor at Meiji University who specializes in race, ethnicity and immigration, understands the motivations of the trio.

Herself a zainichi Korean, Ha says many foreign residents feel alienated from Japanese political discourse "even though they are impacted by it."

"Election season is a painful moment as it reminds me that we are still excluded from one of the most basic civil rights," said Ha.

"My family has been in Japan for 90 years, my first language is Japanese, and I want to call Japan my home. And yet, I hesitate because we are not treated with equality and fairness as full members of society."

Through the process of naturalization, Japan gives foreign-born residents a chance to take the same rights as a Japanese person. They have to have lived in the country for a prescribed amount of time, and must meet a number of other conditions, but it requires they give up any other nationality and their old passport.

But many foreign passport holders do not believe they should be required to forfeit their nationality in order to have a voice in their home country.

Cognizant that a vote for "me" does not necessarily mean that vote will represent the views to which they prescribe, the three women want to make clear they are not trying to influence anyone to vote one way or another -- they just want to open a dialogue about issues of importance.

"It gives us a chance to engage in a conversation. If I say 'vote for me' and then (someone) asks me what are your issues and they agree with it, then it is their choice," said Loo.

"In engaging in a conversation, (someone) might change their mind, they might go the complete opposite way, but that's their choice...but at least now I can put my picture."

And this was the situation for Hamanaka, who, of course, does have a vote.

She was initially conflicted about being involved as she felt it may have been viewed as inauthentic.

"I wanted to support them, I wanted to do something with them, but I didn't know how I can," said Hamanaka, who is from Tokyo and works alongside Loo at the professional services company.

Even more frustrating for the women is that Japanese people are increasingly taking their opportunity to vote for granted, demonstrated by the poor turnout at the upper house poll in July.

At that election, in which Prime Minister Shinzo Abe's conservative Liberal Democratic Party and its coalition partner secured a healthy vote, turnout for voting for candidates standing in the electoral constituencies fell to 48.80 percent, the second-lowest on record since 44.52 percent in 1995.

In the proportional representation section, turnout was slightly lower at 48.79 percent, according to the Internal Affairs and Communications Ministry.

For Hamanaka, the indifference of her fellow Japanese is annoying, but understandable.

"I didn't go vote (in the past) because I wanted to prioritize what I wanted to do at that time over going to vote, so I understand it," she said.

"But not going to vote means they support the current system, so I want more people to think about the consequences."

One solution to the lack of representation for foreigners would be for Japan to extend them the vote, as in some circumstances a number of other countries, including Japan's close neighbor South Korea and a range of European nations, do.

Meiji University's Ha says there is no reason for that not to become a reality, as with the numbers alone -- foreigners make up about 2 percent of Japan's population -- the impact the foreign community could have is very limited.

"I absolutely think (foreigners being given a vote) is realistic, particularly for local elections, because we already have many examples from other countries."

"I think it requires discussions as to whether or not foreign residents should have a right to participate in national elections, but currently there is no such discussion because in Japan political rights are thought to be strongly connected with one's nationality."

Similarly, Loo sees the likelihood of her getting a vote being a long way off, but says there is good reason for local governments to want to hear from their entire constituency, Japanese and non.

Tokyo's Shinjuku Ward is a perfect example of somewhere that foreigners need a voice.

The bustling, central Tokyo hub has a total of 43,065 foreign residents as of Aug. 1, according to its ward office, making up 12.3 percent of the total population -- by some way the most of any municipality in Japan.

Therefore, says Loo, the local government should be a reflection of that relatively diverse demographic.

"Let's say it is going to be 20 percent in the future, as the Japanese population shrinks, that means a kind of big chunk of people living in Shinjuku, for example, don't have a say in how they want their community to be, how they want their living area to be."

"So, something has to happen to change that system."

There was a time when Japan gave serious thought to extending the vote to permanent residents.

Former Prime Minister Naoto Kan of the now-defunct centrist Democratic Party of Japan in 2010 supported an earlier Supreme Court ruling supporting the constitutionality of granting voting rights to non-Japanese nationals, but when he and then his party were ousted from power by the LDP, the push foundered.

There are examples of where permanent residents are allowed to vote in local referendums, such as in Maibara in Shiga Prefecture which became the first local municipality to allow it in 2002.

Since then, a number of other places have similarly allowed permanent residents a say in referendums on limited local matters, but no more than that.

Ha says much of the current thinking on the subject posits that there are only intangible reasons for major change being little more than a pipe dream.

"I see it as a symbolic refusal to treat foreign residents as equal partners in our society," she said while pointing out that in many other countries, foreigners have a say.

"People in Japan really must start asking themselves what is so wrong about allowing foreign residents to vote instead of giving up on critical thinking and automatically equating voting rights with nationality."

With universal suffrage realistically out of reach, at least for the foreseeable future, the #VoteForMe three have plans to make an impact elsewhere.

They plan to prepare a bigger and better campaign for the next Japanese poll, a general election that has to be held by October 2021, but also to expand their activities to encompass more activism.

Their next target is establishing a program to use performance art to highlight some targets of discrimination that hide in plain sight.

They want to bring attention to a range of issues of importance to them, with the treatment of Japan's so-called burakumin population one such area of concern.

Hamanaka says that by using performance to highlight discrimination, it illuminates the reality faced by those suffering from in an accessible way: so that is the plan.

The meat-packing industry is particularly problematic, she says, because Japan's burakumin, an outcast group traditionally rooted to the bottom of the social strata and restricted to working in jobs widely -- and without any basis -- considered "dirty" such as meat-processing, undertaking or as hide tanners, are a people whose plight should be more widely understood.

"In our daily lives it is very invisible, that process, but they are people who work in it and they are discriminated against in Japanese society, historically," said Hamanaka.

"We are trying to make performance art in the place, and organizing a study tour to make the discrimination visible in a creative way."

With impressive young women like Chung, Loo and Hamanaka trying to make their voices heard in Japan, the country is very likely moving in a positive direction.

However, the question remains whether the country's leadership, or wider population, have any interest in listening.