The restaurant industry may be known for its cutthroat competition, but a few establishments in Japan have started to take a more socially aware approach to winning the hearts of customers.

At a restaurant in central Tokyo, owner Sekai Kobayashi has looked back to the traditional Japanese "shokudo" dining hall -- casual, often family-run eateries serving locals with inexpensive dishes -- as she takes the dining experience in a new direction she hopes will be a blueprint for a successful future.

Appropriately enough, the name of the restaurant in Tokyo's Jimbocho district, home to office buildings and famous for its second-hand bookstores, is Mirai Shokudo, which translates as "future dining hall."

The name, she says, expresses her desire to provide an atmosphere that is fresh and innovative on the one hand but also evocative of a gentler past on the other.

At the heart of Kobayashi's vision is her desire to create a space in which "everybody is accepted and everybody belongs," she said.

In implementing it, Kobayashi has taken the unusual step of allowing customers at her 12-seat establishment to pitch in with help in exchange for a meal that they can either have themselves or donate to others. 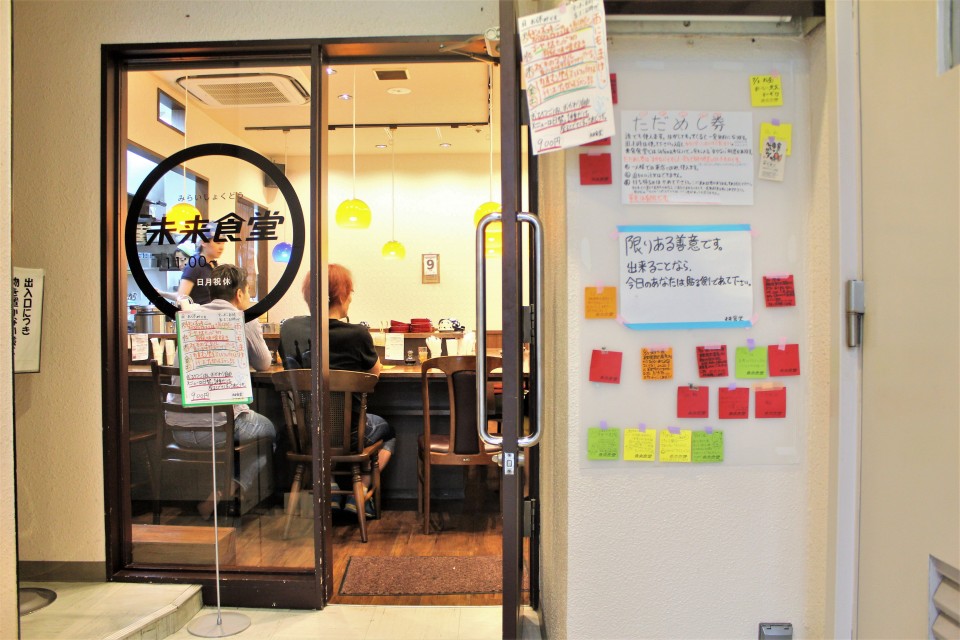 "The most difficult issue for creating a space where everybody belongs was how to include people who may not have enough money," explains Kobayashi, who says she is the sole employee of her shop.

The work-for-a-meal system is based on a practice used by many restaurants for their own staff, who get to eat from the restaurant's own kitchen outside peak business hours, she said.

At Mirai Shokudo, customers who have eaten there before at least once can assist Kobayashi for 50 minutes in exchange for a meal.

The restaurant provides a Google calendar to check for available positions, such as cleaning or food preparation, and reservations can be made through email or Facebook.

Meal donations are made through post-it notes -- the equivalent of meal tickets -- pasted on a board outside the restaurant, often with messages included.

Examples of such messages are "Enjoy your meal!" and "Please visit Taiwan," and the post-it notes also include the date and occasionally the name of the person who was kind enough to provide a free meal.

How a customer helps out in the shop depends on the time and person. Mornings are usually reserved for those who help out with preparing meals before the restaurant opens, while others may be asked to wipe down tables. But once their 50 minutes is up, the person goes back to being a customer.

Mirai Shokudo has also introduced another major innovation by eliminating the "choosing aspect" of a restaurant, with only one dish offered per day. The system is meant to allow the customer, often a business person on their lunch break, to save time and savor the food.

"I can start getting the meal together as soon as the customer walks in the door," Kobayashi explains. "Which means the food gets to the customer (almost as soon as) they sit down, which is beneficial for both the restaurant and the customer."

Kobayashi makes it a rule not to repeat a meal, with the exception of popular foods such as meatloaves and ginger pork. But even then she makes sure that there is at least a two-month gap before the same recipe appears again. 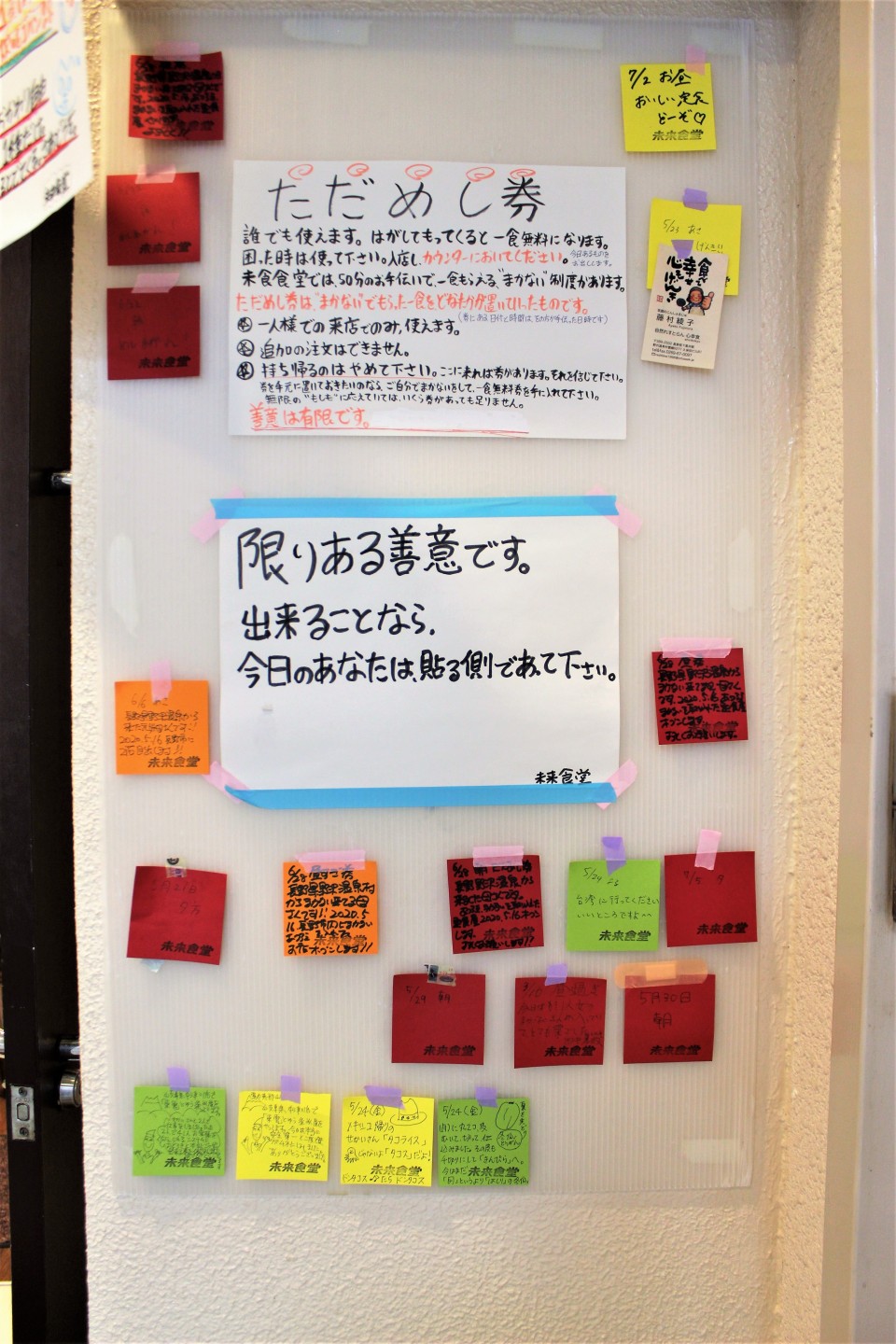 ("Tadameshiken," or free meal tickets, are available for customers dining at Mirai Shokudo to those who help out at the restaurant for 50 minutes.)

Ideas for the ever-changing daily specials often come from the customers themselves.

"I ask the customers late on a Saturday afternoon what they want to eat next week," she says. She then makes decisions for the daily specials, balancing out the dishes so the recipes don't overlap, even if sometimes the requests are quite a test for Kobayashi.

"The most challenging was when someone asked me to make 'bak kut teh,'" she said, a popular pork dish served commonly in Malaysia, which she had no prior experience of cooking.

Although customers are often surprised by the menu system, Kobayashi believes food requests are one of the key motivations for customers to come back.

Many have been drawn by word-of-mouth, but Kobayashi has also chronicled her journey to opening Mirai Shokudo in 2015 with a blog and four books.

In her blog, she cited as her inspiration a visit she made to a "kissaten" -- a traditional Japanese coffee house -- when she was a teenager. She felt that in its unique atmosphere she was "allowed to be herself and be accepted for who she was," she wrote.

Yumi Tsuru from Nagasaki Prefecture, who was helping out for the third time, heard about Mirai Shokudo from an acquaintance who had also assisted at the shop.

The 57-year-old Tsuru, who runs her own small restaurant in the city of Saikai in the southwestern prefecture, was so impressed she even adopted Mirai Shokudo's system to provide free meals to people who help out at her own establishment. On this day at Kobayashi's shop, she helped prepare the day's meal and cleaned plates.

Another unique diner makes its home in Kyoto Prefecture.

True to its name, Hyakushokuya (100-meal diner) serves only 100 meals per day, and the workday ends when all 100 have been eaten.

The restaurant was opened in 2012 when owner Akemi Nakamura decided to follow her and her husband's dream of opening a diner before starting a family.

"I decided to pursue the dream, not 'at some point,' but 'right then,'" she says.

Their signature dish -- the steak bowl -- is also one of Nakamura's favorite meals, originally cooked by her husband. 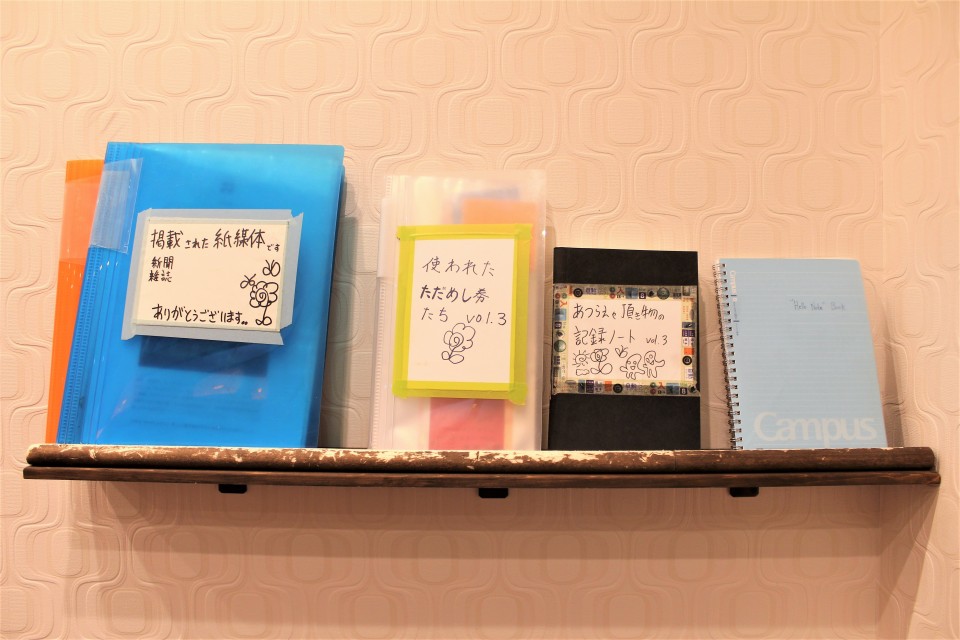 (A selection of notebooks with used free meal tickets and handwritten notes from customers, amongst others, can be found for others to peruse at Mirai Shokudo.)

"When he first made it for me at our home, I was really thrilled," she said. "I had finished eating half of the meal before I knew it, and I felt sad because I was about to finish eating it."

Wanting to share the same experience with others, she made the dish a staple of the restaurant, which specializes in meat-based foods. The steak bowl, she says, is also the last meal she wishes to eat before she dies.

Hyakushokuya employs 30 people across its three branches throughout the prefecture, from single mothers and exchange students to the disabled and the elderly. All of them, without exception, finish work by 5 p.m., she said. There is no overtime.

With 100 meals served per day, Nakamura admits there is a limit to profits. But she says that although "it may be natural for a company to prioritize profits as its primary responsibility, the most important thing for an employee is their free time."

Numbered tickets are available from the diner from 9:30 a.m., allowing customers to enjoy themselves on outings in the city before coming back at a designated time for their meal.

"My biggest mission is not only to create something better in the world, but also to create a fun and comfortable working environment for the employees," Nakamura said. "As that's probably something only I can do."