The district of Takadanobaba on the west side of Tokyo's Yamanote loop line may be best known for its vibrant student life and cheap eateries, but nestled in its corners is a small yet thriving Myanmarese community.

Located across the Kanda River around five minutes' walk from the station is Ruby, one of a dozen or so Myanmarese restaurants found in what is sometimes affectionately known as "Little Yangon." 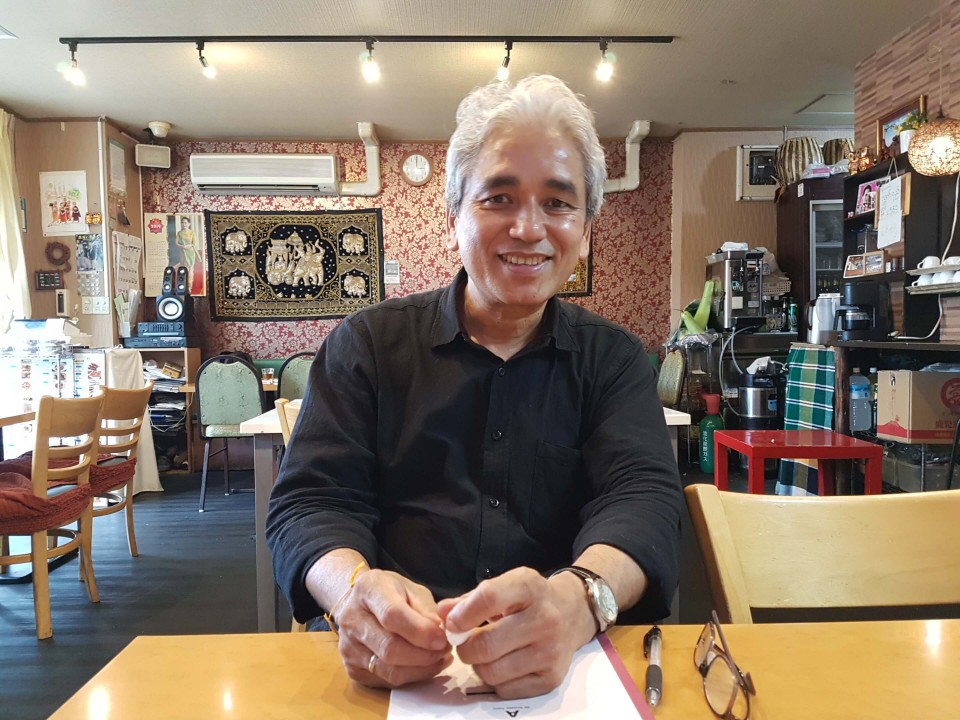 (Kyaw Kyaw Soe, a pro-democracy activist who fled to Japan in 1991, sits relaxed at his Myanmar cuisine restaurant "Ruby" in Takadanobaba, on July 16, 2019.)

Opened in 2002 by Kyaw Kyaw Soe, a prominent Myanmarese activist in Japan, the restaurant "is a place to gather, not only to have Myanmar cuisine, but also to share information and have exchanges," he said.

Granted refugee status after just an 18-month wait in 1997, his experience is often heralded as one of the rare positive stories in Japan's notorious closed-door policy towards asylum seekers. He has been interviewed by various media outlets, and even had a documentary made about him in 2012. 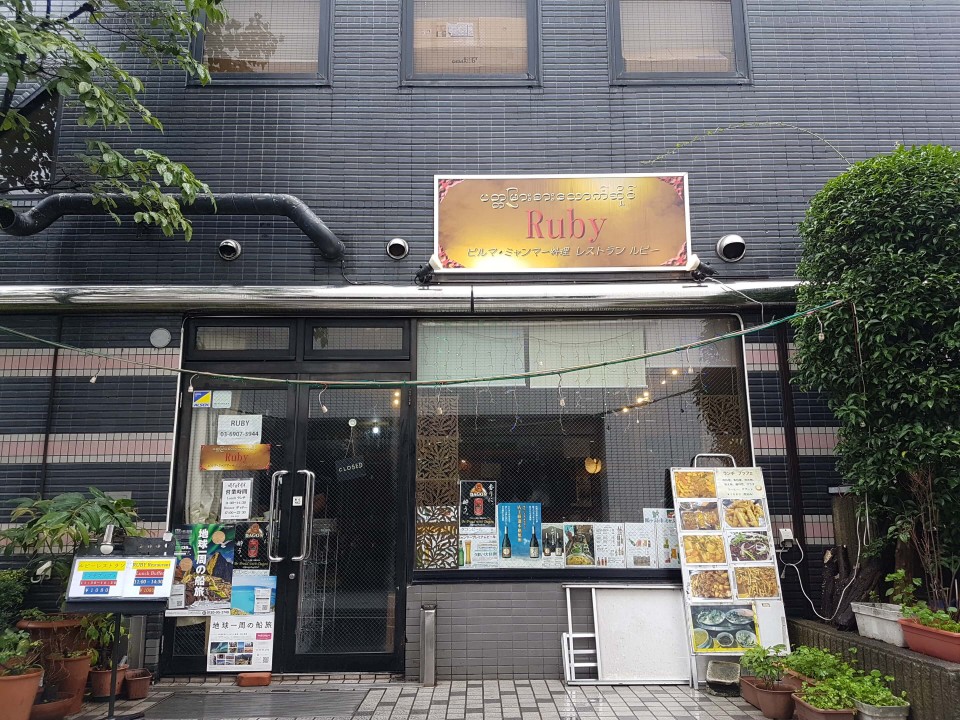 (The street entrance of "Ruby", located across Kanda River five minutes' walk from Takadanobaba station on a rainy afternoon, July 16, 2019.)

A democracy activist since his student days in Myanmar, Kyaw Kyaw Soe fled to Japan via Thailand in 1991, leaving his wife behind. Without a valid visa, he kept a low profile until he won official refugee status. He was finally reunited with his wife when she joined him in Japan, and the couple opened Ruby together.

"It was difficult for me to live in Japan without knowing the Japanese language and culture. So I had to adapt here," the 56-year-old said.

Now fluent in Japanese, Kyaw Kyaw Soe is very active in the Myanmarese community on top of running his restaurant. Around five years ago, he started an organization called Shwegangaw, which offers Japanese lessons to Myanmar immigrants, and Burmese lessons to the children of those immigrants. He is also the host of a half-hour nightly radio program by Japanese public broadcaster NHK, where he covers the Myanmar language and other topics about his homeland.

The Myanmarese community in Japan largely grew in the 1990s, a time of political turmoil back home when many activists in the country's pro-democracy movement fled to escape persecution at the hands of the then-ruling military junta.

There were 26,456 Myanmar residents in Japan as of the end of 2018, with roughly 40 percent living in Tokyo, according to the Ministry of Justice. Local government data shows that 2,033 live in Shinjuku Ward in which most of Takadanobaba is located, accounting for around 21 percent of the Myanmarese population in Tokyo. A similar number are found in Toshima, a neighboring ward which parts of Takadanobaba spill into.

In this district, on the fourth floor of a modest apartment building, is the Japan Myanmar Culture Center. Founded in 2002 by Ma Hay Mar, the nonprofit organization has over the past 17 years become one of the key places of support for Myanmar locals who need help adjusting to life in Japan. 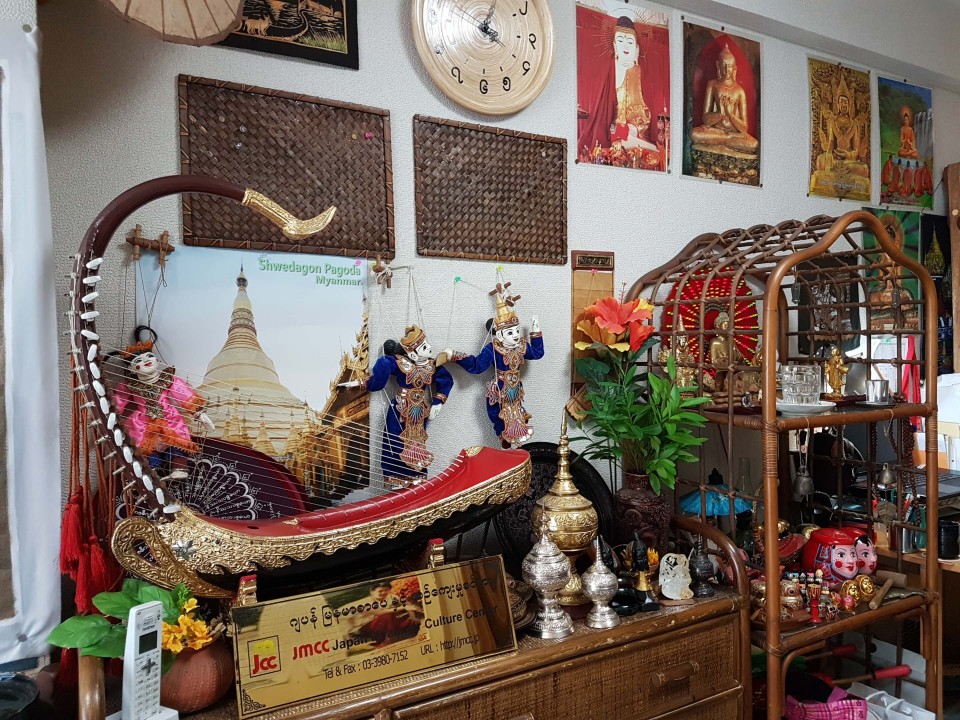 (Instruments and other cultural items of Myanmar line a wall at the Japan Myanmar Culture Center in Takadanobaba in this photo taken July 17, 2019.)

Every Sunday, Ma Hay Mar holds Japanese-language classes for Myanmar immigrants, where around 40 people gather each week. While the center also offers classes in aspects of Myanmarese culture to curious Japanese, the Japanese lessons are its most popular course, she said.

It also teaches second-generation Myanmar children the Burmese language, but anyone can join, and about 20 Japanese are currently students.

"They are either taught by myself or assistant helpers, who are students from Myanmar," said Ma Hay Mar, who herself came to Japan in 1996 as a commerce student. 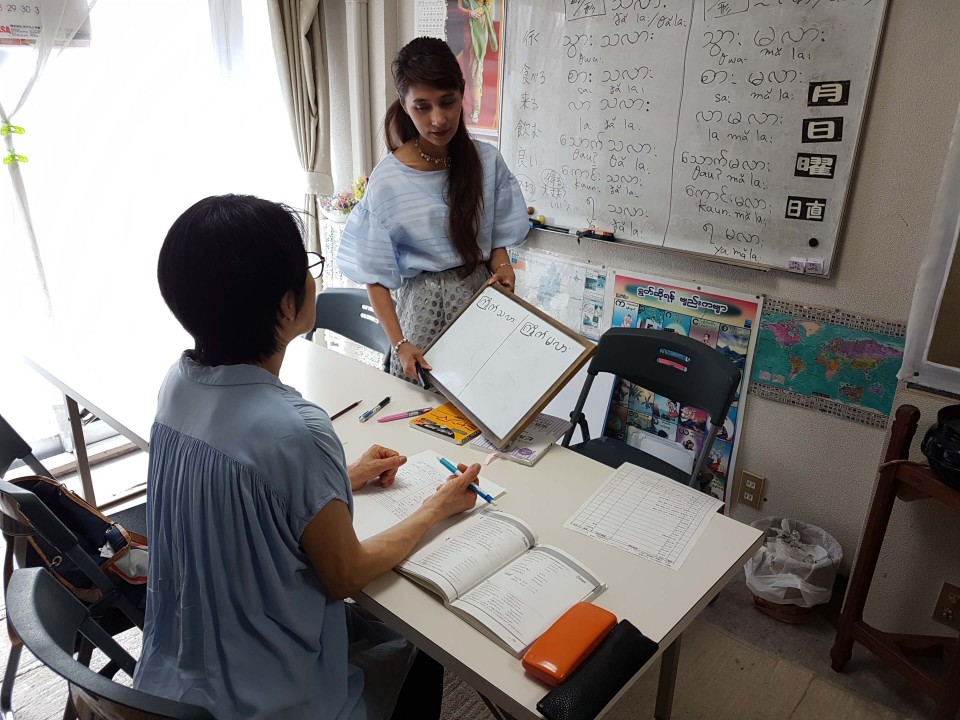 (Ma Hay Mar, President of the Japan Myanmar Culture Center, teaches the Burmese language to a Japanese student in a private lesson held at the center on July 17, 2019.)

Her Japanese husband, Kiyoshi Ochiai, whom she met in 1994 and who is a co-director of the JMCC, fell in love with Myanmar from the first time he set foot there on holiday in 1990. "I was fascinated by how the country seemed to be stuck in its own time loop," he said.

Back in Japan, Ochiai began disseminating information about Myanmar, starting a free newsletter called Badauk in 1996 and distributing it to libraries and community centers. In 2001, Ochiai transformed the publication into a blog, which he now updates monthly. He is also actively involved in the range of cultural events that the JMCC runs, including cooking classes, talks and traditional dance lessons.

"The Japanese media tells a different story to reality. I want to show people the real appeal of Myanmar," he said, arguing that news reports about Myanmar in Japan generally give a negative impression of the country.

"Little Yangon" actually began in the residential suburbs of Nakai in Shinjuku Ward after the wave of Myanmarese dissidents arrived in the 1990s. Until Japan softened its stance on recognizing them as refugees, many found themselves residing illegally in the country, doing their best to scrape by undetected.

From the mid-1990s, the community began to shift to Takadanobaba. Given the history of the community, Ochiai speculated that the reason was that it was easier to blend into the crowd in the more bustling new location.

Nowadays, there is no longer any need to hide, as students and technical interns on valid visas make up a sizeable chunk of the Myanmar population in Japan. Consequently, Takadanobaba's "Little Yangon" has begun to shrink.

The core is now an area of Myanmarese restaurants and other hubs of activity for the community centered on a building called Tak 11.

But Moe Thauk Kye, a Burmese library housing more than 5,000 books, still stands as a testament of what the combined efforts of the previous generation achieved.

Located in the no-frills apartment of Tin Tin Win, 60, the floor almost seems to sag with the weight of the shelves, each housing hundreds of carefully numbered books on Myanmar. Posters and framed photographs of Myanmar's current leader and pro-democracy icon Aung San Suu Kyi adorn the kitchen walls. 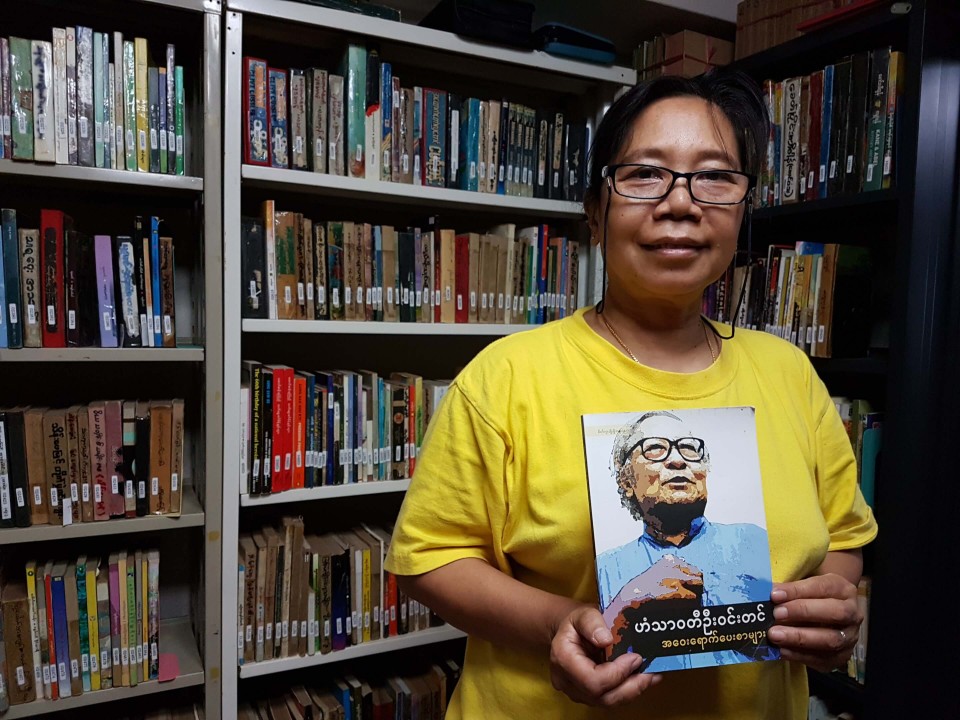 (Tin Tin Win, a pro-democracy activist who came to Japan in 1991 and started the library in 2000, holds one of newer books added to the collection as she poses for a photo in her apartment on July 17, 2019.)

Tin Tin Win says the arrest of a group of students who tried to start a library near Yangon during the military crackdown in 1996-1997 motivated her to begin collecting books. For two years, she worked tirelessly with other volunteers from Myanmar to gather thousands of books, the majority in Burmese.

By 2000, she was able to start the library in her apartment in Tokyo's Itabashi Ward. Funds for the library's upkeep came out of her own pocket and those of Myanmarese volunteers, one of whom later became her husband.

"The room was only 7.5-mats in area, and four of us slept in the middle surrounded by shelves on all four walls," she recalls, as she works with a laminator amid a table littered with dozens of books, magazines and files.

When Tin Tin Win moved to her current apartment in Shimo-Ochiai in 2004, she brought the library with her, at the same time changing its original name of "Ahhara" (food for thought) to its current incarnation, which means "morning star."

Tin Tin Win, similar to Kyaw Kyaw Soe, originally came to Japan in order to escape from the oppressive military regime. A graduate from the Yangon Institute of Economics, she worked at an oil company in Myanmar for around three years until she was fired for participating in pro-democracy protests in 1988, which were still illegal at the time.

Tin Tin Win decided she wanted to start a new life overseas, and her friend's sister, who was studying in Japan at the time, helped her enter Japan on a three-month tourist visa in 1991. When that expired, she remained without a valid visa for years, which was the norm for many Myanmarese fleeing their home country during the 1990s.

"It wasn't so strict then. Police pretended not to notice. They would ask us where we were from and then say, 'just work hard, earn money, and go back to your country'," she said.

Things, however, changed in 2003, at the start of the second term of then Tokyo Gov. Shintaro Ishihara, who campaigned on a nationalist platform. Tin Tin Win was fortunate to encounter Shogo Watanabe, a lawyer who specializes in helping people from Myanmar apply for refugee status in Japan. She applied in April 2003, and was granted refugee status in just 12 months. She credits her work with the library for the speedy decision. 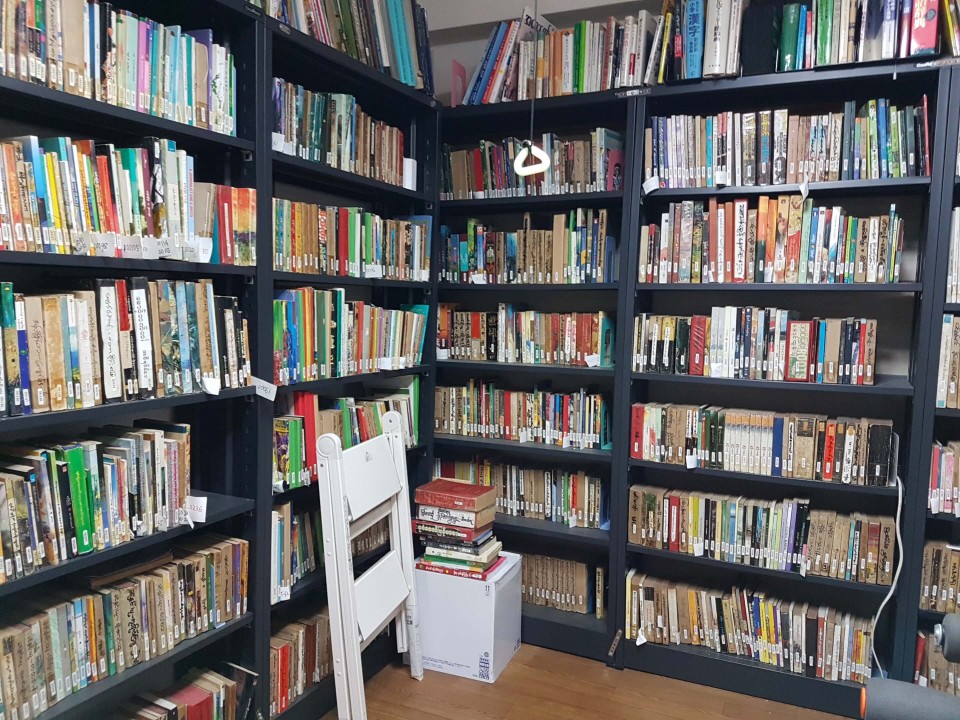 (Around 5,000 books on Myanmar, the majority in Burmese, fill a room in the Shimo-Ochiai apartment of Tin Tin Win in this photo taken July 17, 2019.)

"The Japanese government recognized that if I returned to Myanmar my life would be in danger. Our library had printed books with poems by activists such as the late Tin Moe, which are banned in (our) country," she explained.

After running it for close to 20 years, Tin Tin Win said she plans to scale down the library, and is considering scanning the books to create an internet library instead. If that goes forward, the physical books will be donated to an international library or given away to people in detention.

"We don't get so many visitors nowadays, as younger generations are less inclined to read. And if they want to, they tend to do it online anyway," she said.

Myanmar, too, has seen changes. In 2011, the military government was replaced by a military-backed civilian government, paving the way to political reforms and making travel easier. Ma Hay Mar says that she now makes a trip back once a year, although returning permanently is not currently on the agenda.

"The military has asked people to return, but the economy is bad and even if we return, there is no way to make money," she said.

But for Kyaw Kyaw Soe, who was able to set foot in Myanmar in 2016 for the first time in 25 years, the draw of his home country remains strong. Now he visits around twice a year, running workshops for teachers and composing songs for local schools. Eager to contribute to building his country, he said if all goes well, he and his wife would like to return permanently within the next three years.