Two Filipino women who claimed to have been sexually abused by Japanese soldiers during World War II called for a formal apology and compensation Wednesday during a rally in commemoration of the end of the war 74 years ago.

"I wanted nighttime to never come because then we would be raped by different Japanese men. When we would refuse, they would hit us with the tool they use to hit horses. They would also burn us with cigarettes," Narcisa Claveria, who is around 90 years old, said at the rally staged near the presidential compound in Manila.

In earlier interviews, Claveria had said she was 13 or 14 years old when she was brought into a Japanese garrison in her home province of Abra, in the northern part of Luzon Island, together with her sisters and other women.

Japan occupied the Philippines from December 1941 until its defeat by the U.S.-led Allied forces in August 1945.

"We suffered greatly and I hope the youth never experience those today because I don't want them to go through that," Claveria, who spoke in Filipino, said during Wednesday's event organized by such groups as Lila Pilipina and Gabriela Women's Party.

The groups back the pleas of the victims for the Japanese government to admit that "sexual slavery" took place, apologize for it and provide just compensation, as well as for the Philippine government to support their campaign. 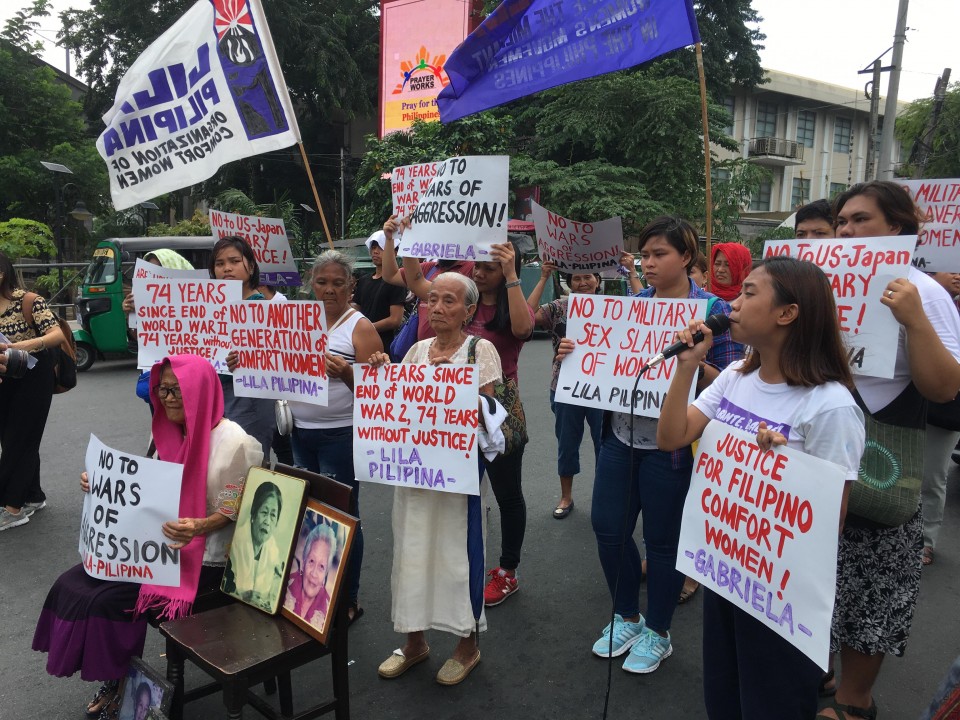 "We have not received justice and we are all dying. I hope that the president hears this. And if he will think about helping us, then he would need to speak to the Japanese government," Estelita Dy, 89, another victim, told reporters at the rally.

There are an estimated 1,000 Filipino women who were believed to have been sexually abused by Japanese soldiers during the occupation period, of whom 174 became members of Lila Pilipina while around 90 others grouped themselves as Malaya Lolas when they all made public their experiences in the 1990s. Only a few dozen remain alive now.

Joms Salvador, secretary general of Gabriela Women's Party, said "The call for justice for these grandmothers is resoundingly loud because, first, more than seven decades have passed, yet justice remains elusive."

"We are asking for the Japanese government to be remorseful of the things they've done and to really give justice to their victims," added Sharon Cabusao-Silva, Lila Pilipina coordinator.

Some victims received compensation in the mid-1990s through the now-defunct Asian Women's Fund, a pool of private donations set up at the Japanese government's initiative in 1995 and run through 2007, but the groups reject that as unofficial.

They also dismiss apologies expressed by some Japanese government officials in the past as essentially personal, and not the official government position.