Recent signs that Japan and South Korea are making subtle overtures to each other have raised hopes that they are moving toward de-escalating their diplomatic feud.

But while their foreign ministers agreed Wednesday to continue dialogue, it remains unclear what a compromise that would satisfy both sides would look like, making it unlikely that Japanese Prime Minister Shinzo Abe and South Korean President Moon Jae In will agree to a detente anytime soon.

In a speech last week to commemorate Liberation Day, the anniversary of Japan's 1945 surrender in World War II and the end of its colonial rule on the Korean Peninsula, Moon extended a rare olive branch.

"We hope that Japan will play a leading role together in facilitating peace and prosperity in East Asia while it contemplates a past that brought misfortune to its neighboring countries.

"Better late than never: if Japan chooses the path of dialogue and cooperation, we will gladly join hands. We will strive with Japan to create an East Asia that engages in fair trade and cooperation," he said.

It was a decidedly more conciliatory note than Moon took on Aug. 2, when he condemned Japan's removal of South Korea from a list of trusted countries that enjoy minimum trade restrictions as "a selfish, destructive act."

The removal from the "white list," as well as a tightening of trade controls on some materials needed by South Korean firms to manufacture semiconductors and display panels, has drawn a heated response from Seoul.

In a three-way meeting with her Japanese and Chinese counterparts Wednesday on the outskirts of Beijing, South Korean Foreign Minister Kang Kyung Wha called for "arbitrary" measures targeting exports to be withdrawn, without naming Japan. 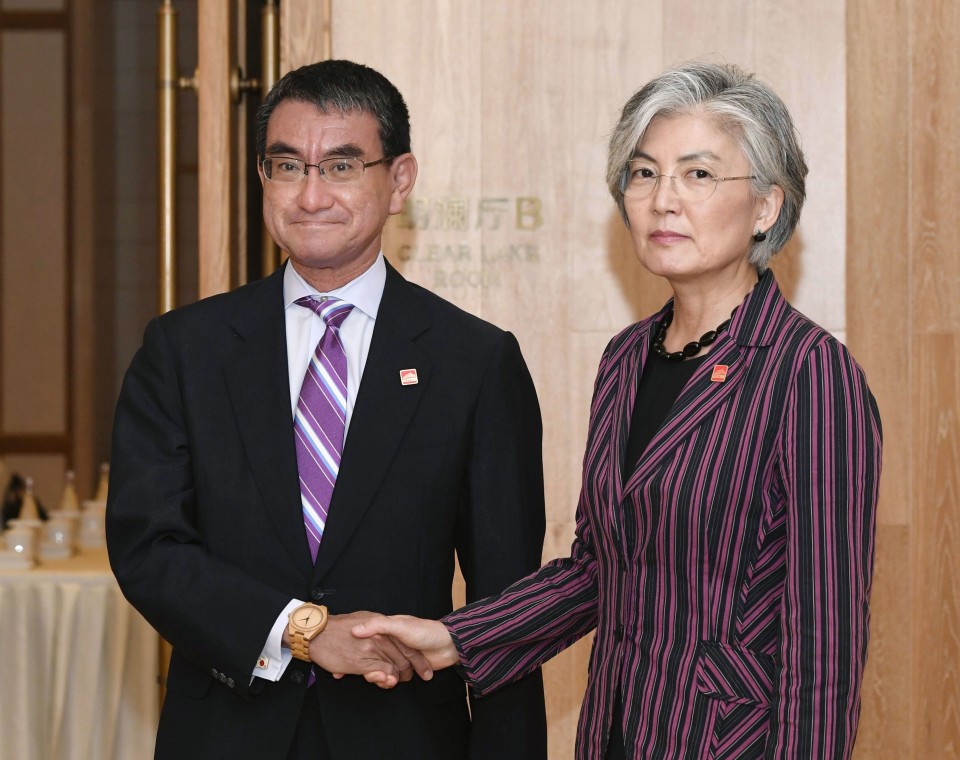 Japan, S. Korea to maintain dialogue, though no detente in sight

But a Japanese official pointed out that compared to Kang's comments at a regional conference that she attended with Japanese Foreign Minister Taro Kono earlier this month in Bangkok, where she explicitly criticized Japan, there had been "a clear change in tone."

Japan has also signaled that it does not want an all-out trade war like the one the United States and China are embroiled in.

The Ministry of Economy, Trade and Industry said that its tightened trade controls are meant to address national security concerns and do not constitute an export ban.

As if to prove its point, the ministry approved a South Korea-bound shipment of photoresists, one of the chipmaking materials it now requires case-by-case licenses to export, in about a month, quicker than the 90 days or so it usually takes for such applications to be processed.

Despite such displays of restraint on both sides, however, there is no resolution in sight to the issue at the heart of the dispute -- reparations for South Koreans who say they were forced to work in Japanese factories during the colonial era.

Japan has long maintained that the issue of individual claims was resolved "finally and completely" by a bilateral agreement reached when the countries normalized relations in 1965, under which it provided South Korea with a $500 million lump sum that was to be disbursed.

But last fall, South Korea's Supreme Court handed down rulings ordering Japanese companies to compensate more than a dozen South Koreans and their families who they said were forced to work for them.

The companies, Nippon Steel Corp. and Mitsubishi Heavy Industries Ltd., have refused to comply, and lawyers for the plaintiffs are now in the process of seizing and liquidating their assets.

The issue has frustrated the Abe administration, already distrusting Seoul after it reneged on a landmark 2015 agreement to help Korean women that had been forced to work in Japan's wartime military brothels, euphemistically called "comfort women."

As relations sour to the lowest point in years, Abe and Moon have been unable to hold bilateral talks, even when the opportunity presented itself at the Group of 20 summit in Osaka. The last time they did so was September 2018 on the fringes of the U.N. General Assembly in New York.

The next chance for them to speak in person will likely come next month, during this year's U.N. General Assembly. After that, another target could be in December, on the sidelines of a planned trilateral summit with Chinese Premier Li Keqiang.

But Michael Cucek, a professor at Temple University Japan and Waseda University, says Abe and Moon will only meet if there are "clear deliverables" to settle the differences between their countries.

"What Abe wants, the end of harassment of Japanese corporations, does not appear to be a promise any South Korean leader can make, much less deliver upon. My guess is that the stalemate will continue into 2020."