Japanese Prime Minister Shinzo Abe and U.S. President Donald Trump agreed in principle Sunday on a bilateral trade deal and to step up remaining work to sign it in September.

The envisaged agreement will cap months of negotiations after Trump took up the issue of the hefty U.S. trade deficit with Japan and sought to reduce it.

"We've been working on a deal with Japan for a long time. And we've agreed in principle," Trump said after his talks with Abe on the fringes of a Group of Seven summit in the southern French resort of Biarritz.

Facing growing uncertainty about a U.S.-China trade deal heading into the 2020 presidential election, Trump, who had two meetings with Abe, said the forthcoming accord with Japan will be a "very big" one.

Abe said, "It will be a big plus for both of our economies," adding that Japan will buy excess corn from the United States.

The purchase comes at a time when U.S. farmers have struggled to boost exports to China amid Washington's trade war with Beijing that has clouded the global economic outlook.

"But we would like to make sure that our teams accelerate the remaining work for us to achieve this goal of realizing the signing of the agreement on the margins of the U.N. General Assembly at the end of September," he said.

Under the envisaged trade deal, Japan's tariff cuts on U.S. farm products will not be deeper than those under existing frameworks such as a revised trans-Pacific free trade pact, which also involves such countries as Australia and Canada.

But Japan is unlikely to secure the elimination of U.S. tariffs on cars it had sought in the bilateral negotiations, even as levies on many other industrial products will be scrapped, according to sources familiar with the matter.

When Japan agreed about a year ago to launch negotiations for a trade deal with the United States, it was largely interpreted as Abe acquiescing to Trump. 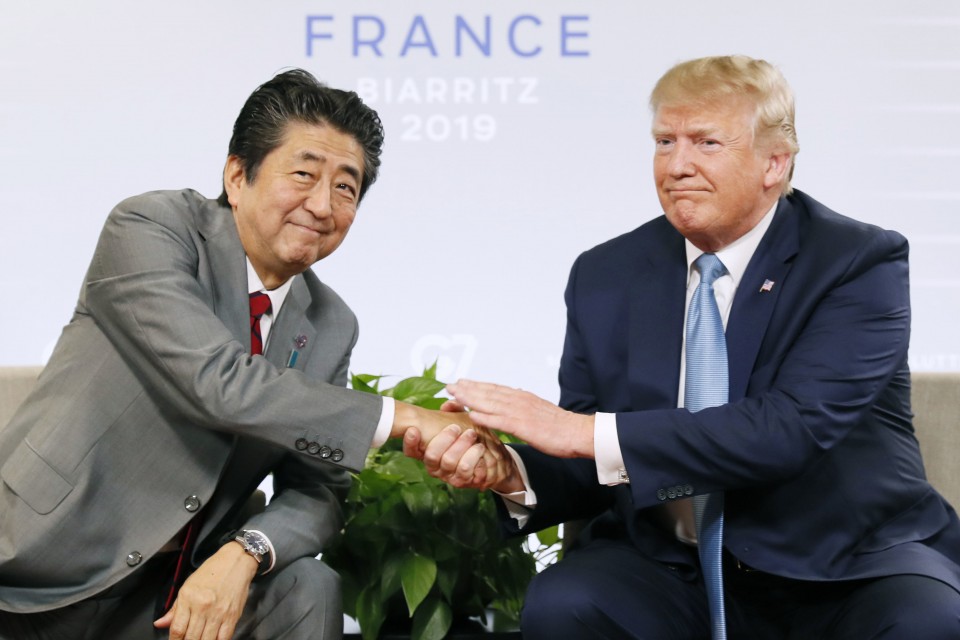 Japan's top negotiator Toshimitsu Motegi, who had worked out the outline of the forthcoming trade agreement, said he believes Japan will remain exempt from higher U.S. tariffs on auto imports that could be imposed for security reasons.

The United States had urged Japan to cut tariffs on American farm products such as beef and pork, believing the TPP has put its producers at an unfair disadvantage compared to their foreign rivals.

The bilateral agreement would see Japan's 38.5 percent tariff on U.S. beef imports lowered in stages to 9 percent, according to the sources.

Abe and Trump showcased progress in trade at a time when the group of seven major economies is struggling to find a united front due to rifts between the United States and other members over trade, Iran and other global issues.

But the Abe-Trump talks were not free from perceived disagreements over other topics, such as North Korea's recent missile launches.

When asked about Pyongyang's flurry of short-range missile tests, most recently on Saturday, Trump said, "I'm not happy about it. But again he's not been in violation of an agreement," referring to North Korean leader Kim Jong Un.

Abe, however, said its short-range ballistic missile launches are in violation of U.N. Security Council resolutions, calling them "extremely regrettable."

But Abe and Trump confirmed the importance of their countries working together with South Korea on North Korea, a senior Japanese official said.

The official added they did not "specifically" discuss South Korea's surprise termination last week of an intelligence-sharing pact with Japan that has served as a symbolic arrangement in countering the North Korean missile threat.

The cancelation of the pact aimed at facilitating exchanges of classified military information between Japan and South Korea, as well as trilaterally with the United States, has worsened relations between the two Asian countries that have already been chilled over historical issues.

Rising tensions in the Middle East due to the United States' withdrawal from a landmark 2015 Iranian nuclear deal was also seen as high on the agenda of the Abe-Trump summit.

But Deputy Chief Cabinet Secretary Yasutoshi Nishimura said Abe and Trump had no discussions on Iran, although the United States has been encouraging allies, including Japan, to join its coalition to protect ships in the Strait of Hormuz.

Japan, which maintains friendly ties with Iran, has not clarified its stance on whether it will join the initiative. Meanwhile, Iran is struggling under U.S. sanctions re-imposed by Trump.

Tokyo has continued to call for dialogue to defuse increased tensions that have come in the wake of the U.S.-Iran standoff over the nuclear accord which was struck between Tehran and six major countries to curb the Middle Eastern country's nuclear program in return for lifting sanctions.