The export value of the material used to clean semiconductors also dropped 32.6 percent to 400 million yen ($3.78 million) in the reporting month, the Finance Ministry said. 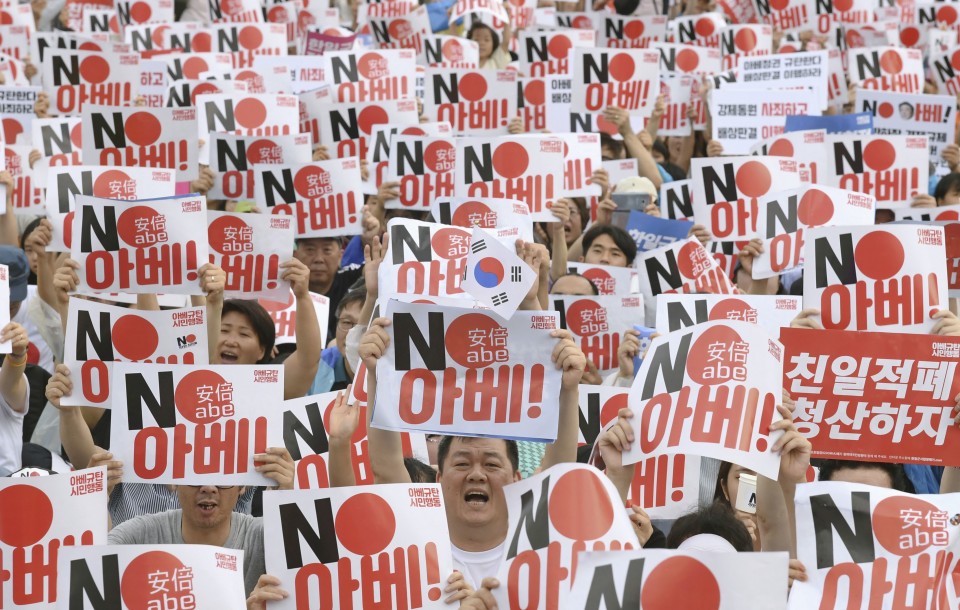 (Protesters stage a rally in Seoul denouncing the administration of Japanese Prime Minister Shinzo Abe on Liberation Day on Aug. 15, 2019, when the country marked the 74th anniversary of the end of Japanese colonial rule.)

The material is one of three chemicals which Japan made subject to export restrictions from July 4, requiring exporters to obtain a license prior to each shipment to South Korea.

Up until July 3, Japan allowed domestic exporters to apply for three-year preferential permits for exports of the chemical to South Korea.

Tokyo has cited national security concerns for its imposition of the tougher rules, but the decision is widely seen as retaliation for top South Korean court rulings last year that ordered some Japanese companies to compensate Koreans who claimed to have been victims of wartime forced labor.

Only products containing 30 percent or more hydrogen fluoride are subject to the stricter export controls and the exact impact of the measures remains unknown in the latest data.

The ministry does not collect individual statistics covering the other two products -- photoresist and fluorinated polyimide -- that are used in the production of semiconductors as well as display panels for smartphones and televisions.

Japan has a large market share in all three materials and South Korean manufacturers of semiconductors and display panels, including Samsung Electronics Co., are expected to take a hit.

On Wednesday, Tokyo revoked Seoul's status as a trusted trade partner, deleting its neighbor from its "white list" of countries that enjoy minimum trade restrictions on goods such as electronic components that can be diverted for military use.

Japan maintains that the issue of compensation for wartime labor was settled "finally and completely" in a 1965 bilateral agreement.