Defense Minister Takeshi Iwaya told reporters in Tokyo the same day that Japan has determined that the two projectiles North Korea fired into the Sea of Japan the previous day were short-range ballistic missiles.

Iwaya called the launches "extremely regrettable" as North Korea is banned from testing such missiles under U.N. Security Council resolutions.

Wednesday's Korean Central News Agency report quoted leader Kim Jong Un as saying that the "military action would be an occasion to send an adequate warning to the joint military drill now under way by the U.S. and South Korean authorities." 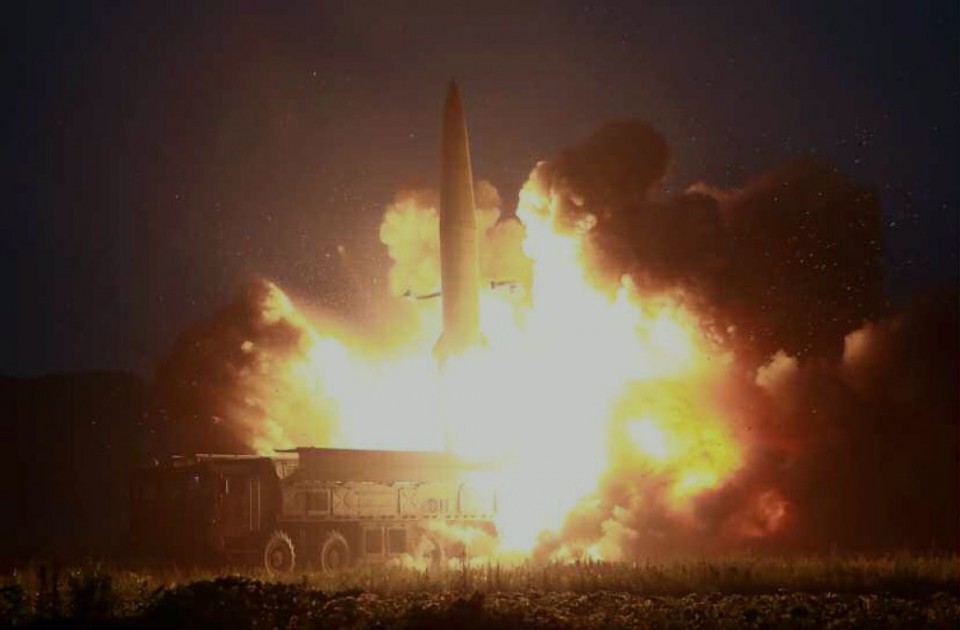 Two tactical guided missiles "precisely hit the targeted islet" in the Sea of Japan after flying "across the sky over the capital area," the news agency said.

The projectiles fired from South Hwanghae Province in the southwestern part of North Korea flew about 450 kilometers while reaching an altitude of about 37 km, South Korea's military said earlier.

It was Pyongyang's fourth such launch in less than two weeks and the first since the start of the latest U.S.-South Korea joint exercise on Monday.

U.S. Defense Secretary Mark Esper told reporters while en route to Tokyo on Tuesday that the United States currently has no plans to scale back joint military exercises with South Korea any further.

"We need to maintain our readiness and making sure that we're prepared," Esper said, according to a transcript released by the Pentagon on Wednesday.

The Rodong Sinmun, the mouthpiece of the ruling Workers' Party of Korea, ran in Wednesday's edition a photo of a missile being launched from a mobile platform. The missile resembled the KN-23, a new type of short-range ballistic missile that was launched in May.

On Tuesday, a North Korean Foreign Ministry spokesperson, in a statement carried by KCNA, condemned the U.S.-South Korea joint military drills for "simulating a surprise and preemptive attack" on the North and said Pyongyang may be forced to "seek a new road."

North Korea had previously directed its call for a halt to the joint military exercises at South Korea, but Tuesday's statement criticized the United States by name, suggesting Pyongyang may reconsider resuming denuclearization talks.

The scaled-back combined command post exercises between U.S. and South Korean forces are scheduled to be held through Aug. 20. They are aimed at testing South Korea's capability to retake operational control over its forces from the United States during wartime.

It mostly involves computer simulations rather than mobilization of troops or military equipment.