A governor in central Japan criticized a mayor in the region Monday for demanding the shutdown of a special exhibition featuring a statue symbolizing "comfort women" at a major art festival in the prefecture, saying his remarks are likely "unconstitutional."

"It is highly likely that (his demand) violates Article 21 of the Constitution, which guarantees freedom of expression," Aichi Gov. Hideaki Omura told a news conference after the event was closed Saturday following a flurry of protests and threats. Nagoya Mayor Takashi Kawamura had demanded part of the Aichi Triennale 2019 be closed down. 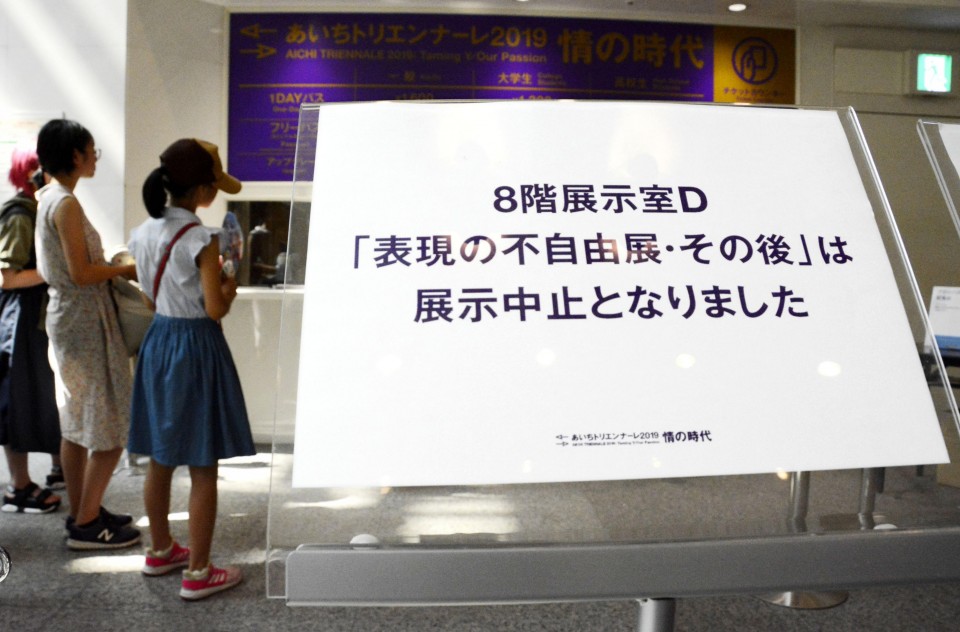 (Photo shows a sign annoucing the closure of the "After 'Freedom of Expression?'" exhibition.)

The exhibit titled "After 'Freedom of Expression?,'" which featured the statue symbolizing women who were forced to work in wartime Japanese military brothels, was halted just three days after the opening of the 75-day art festival.

Kawamura had argued the exhibition could give the wrong impression that Japan accepts a South Korean claim that comfort women were forcibly taken by the Japanese military and thus it should not be displayed at a publicly funded event.

The issue of comfort women -- a euphemism used in referring to those recruited mostly from other Asian countries to provide sex to Japanese soldiers during World War II -- has been a major sticking point in Japan-South Korea relations, which have deteriorated to their worst level in recent years due to wartime history and trade issues.

Omura is head of the organizing committee of the art festival, which is subject to a government subsidy, and Kawamura is the committee's acting chairman. Nagoya is the capital city of Aichi.

"It can't be helped that (Kawamura's protest) is taken as censorship if the person who exercises public power says a certain content is good or bad," Omura said. 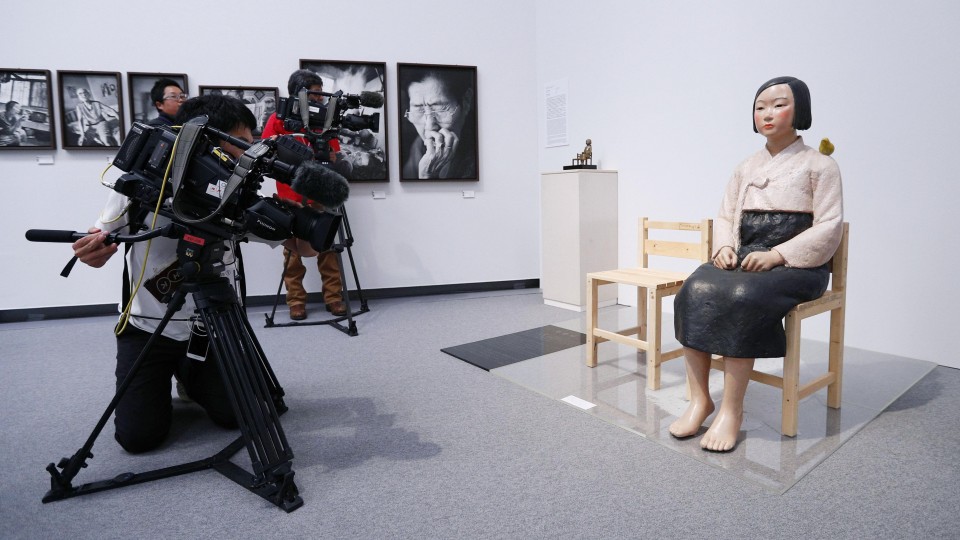 (Photo taken in Nagoya, central Japan, on Aug. 3, 2019, shows a statue symbolizing "comfort women," who were forced to work in wartime Japanese military brothels. The organizing committee of Aichi Triennale modern art festival in the city decided not to exhibit the statue, which would have been displayed in the festival's section titled "After 'Freedom of Expression?'" amid a flurry of protests.)

The statue of the girl was sculpted by a South Korean husband-and-wife team. Most of the artwork on display in the controversial section could not be displayed in Japan in the past "due to censorship or self-censorship," the exhibitor said.

The art festival is one of the biggest contemporary art festivals in Japan, drawing more than 90 teams of artists from around the world.

Omura pointed out there are increasing views that what an exhibitor can do should be limited if taxpayers' money is used, but he countered them, saying public authority is the one that needs to protect freedom of expression.

"I believe it is principle of the Constitution that (public authority) should accept an expression even if it does not like it," Omura said.

In response to Omura's criticism, Kawamura told a separate press conference Monday, "There needs to be a minimum level of regulation. (The statue) tramples on Japanese people's feelings."

"We will conduct an investigation as fast as we can to explain to people how the artwork was exhibited," the mayor said.

The Japan Art Association, a group of artists and theorists who aim for free and democratic development of Japanese art, has protested against the shutdown of the exhibition.

"Succumbing to pressure from the government and threatening is a serious infringement on freedom of expression," the association said, urging the organizer to restart the exhibition.

In making the decision to halt the exhibition, Omura said Saturday that there were growing worries about safely managing the event as organizers had received a number of threatening emails, phone calls and faxes.

One of the faxes it accepted read, "I will bring a gasoline container to the museum," which drew comparisons with the recent deadly arson attack on a Kyoto Animation Co. studio, according to Omura.

The Aichi prefectural government said Monday it had received another email in which the writer threatens to spray gasoline at the festival venue, referring to the Kyoto arson attack that left 35 people dead.

The local government also said two South Korean artists, who had their pieces displayed at a different exhibition within the art festival, informed the organizers they intended to withdraw from the event.

Separately, Chief Cabinet Secretary Yoshihide Suga told a news conference Monday in Tokyo, "Generally speaking, there must not be violence and threats," commenting on the shutdown of the exhibition.

"If there is anything that needs to be dealt with, investigative organizations will respond appropriately," Suga added. The top government spokesman had expressed a cautious view about funding the Aichi art festival with a government subsidy.