A small island in the southwestern Japanese prefecture of Oita has never been a tourist hot-spot, but last year the island saw an unexpected, but not unwelcome, influx of South Korean hikers.

Despite the current icy diplomatic relations between Japan and South Korea, many of the 680 Onyu Island locals want to take the opportunity to build friendships.

"We want to show our hospitality in their native language," said an Onyu resident. "It may not be a big deal (for the South Korean tourists), but we hope to see smiles on their faces."

What brought the approximately 300 South Koreans to Onyu Island, which lies about 50 kilometers from the popular onsen town of Beppu, was the "olle" trekking fad that started on South Korea's Jeju Island. There, visitors traverse various landscapes along a series of coastal walking trails.

In Jeju's local dialect, "olle" originally referred to the narrow path between one's doorstep and the street, according to the Korea Tourism Organization. 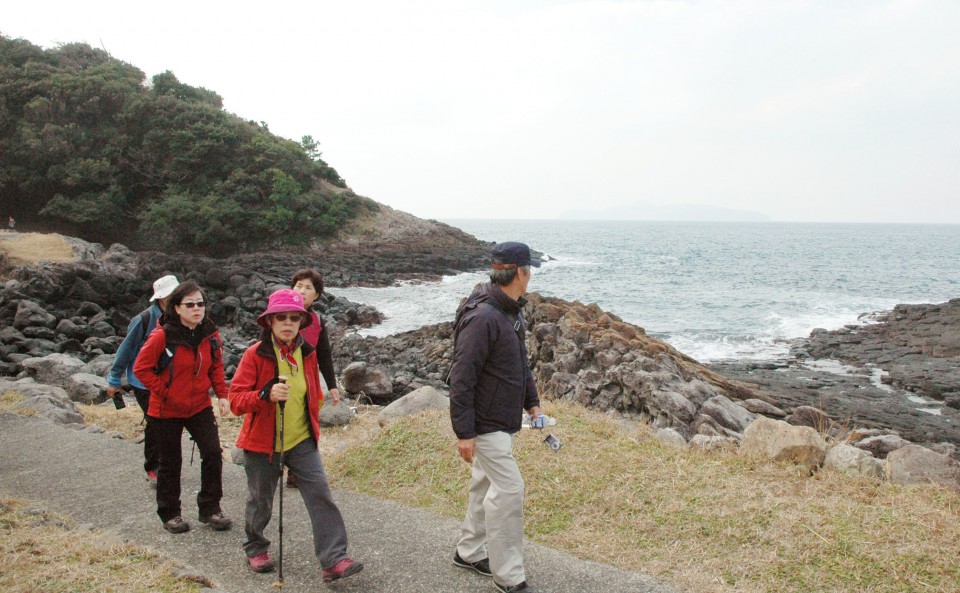 In March last year, Onyu Island was featured in the Saiki-Onyujima route introduced by the Kyushu Tourism Promotion Organization, marketing the hike as one of its Kyushu olle treks.

Since then, the number of South Korean tourists has increased dramatically, a change that came as a big surprise to locals of the formerly sleepy island.

"I wanted to talk to them, but I couldn't" due to the language barrier, said Masumi Shimokawa, who co-heads a residents' association.

The 77-year-old said she had never seen a foreign visitor on the island before the olle course was advertized.

"I wanted to learn simple Korean words, like 'thank you' and 'hello'," Shimokawa said.

Many other residents also felt frustrated at not being able to converse with the tourists. But one year after the first trekkers hit their shores, the residents' solution found them.

At an olle event on the island this March, a resident spotted a policeman, Taisuke Aragane, speaking fluent Korean to a tourist who was looking for a cup from which to drink water.

When he was later stationed at a police box on Onyu Island, Shimokawa and some other residents traveled by ferry to a police station in the city of Saiki, which oversees the police box, to ask if the 41-year-old policeman would give them Korean language lessons.

The police happily approved the request.

"If that helps, we'll be glad to," an official told the residents. "We can use the opportunity to provide tips on how to avoid becoming a victim of crime, too."

In Japan, police officers often give various kinds of lectures, such as on traffic etiquette and how to recognize scams. 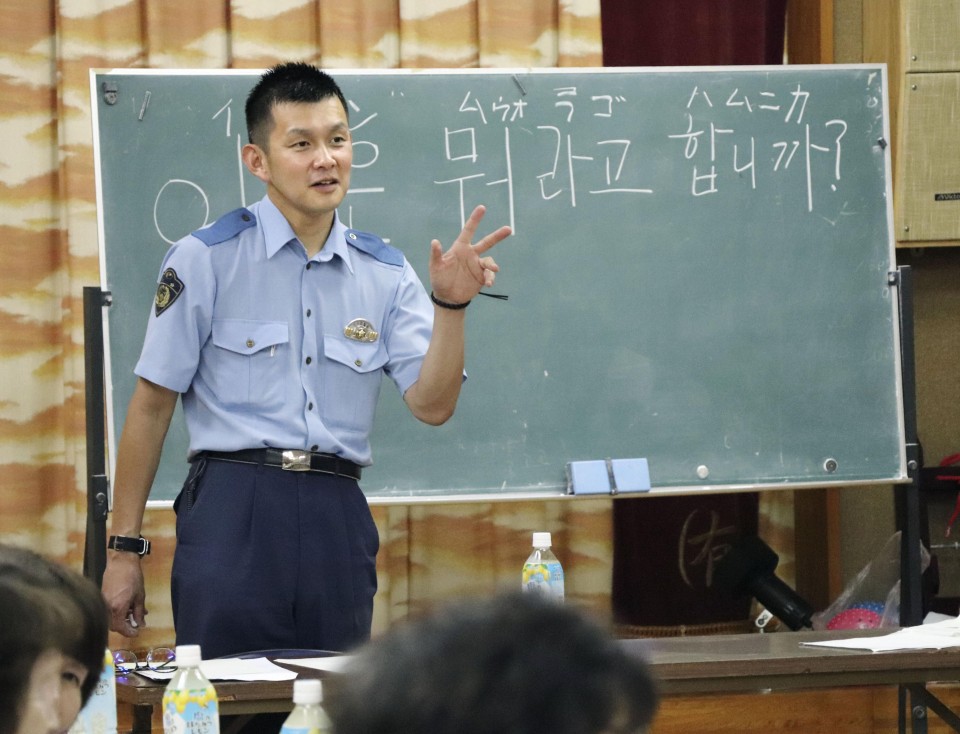 It turns out that Aragane studied Korean for two years from 2009 at a training center at the National Police Academy in Tokyo. He wanted to master the language and make it his forte.

While many of his classmates were in their 20s, Aragane was 32 at the time.

"There were tough times because there was a difference in how quickly we were able to pick up (the new language)," Aragane said. But he studied hard, telling himself he could not give up as the training was funded by taxpayers, and successfully graduated.

After returning to Oita Prefectural Police, Aragane utilized his language skills, such as translating documents and explaining driving rules in Korean.

He also studied the history and culture of South Korea to acquire more background knowledge and context to the language. Now his favorite actor is Korean star Lee Byung Hun.

On Onyu Island, the first Korean class held in late June was a success, with residents praising Aragane's affable approach to teaching. 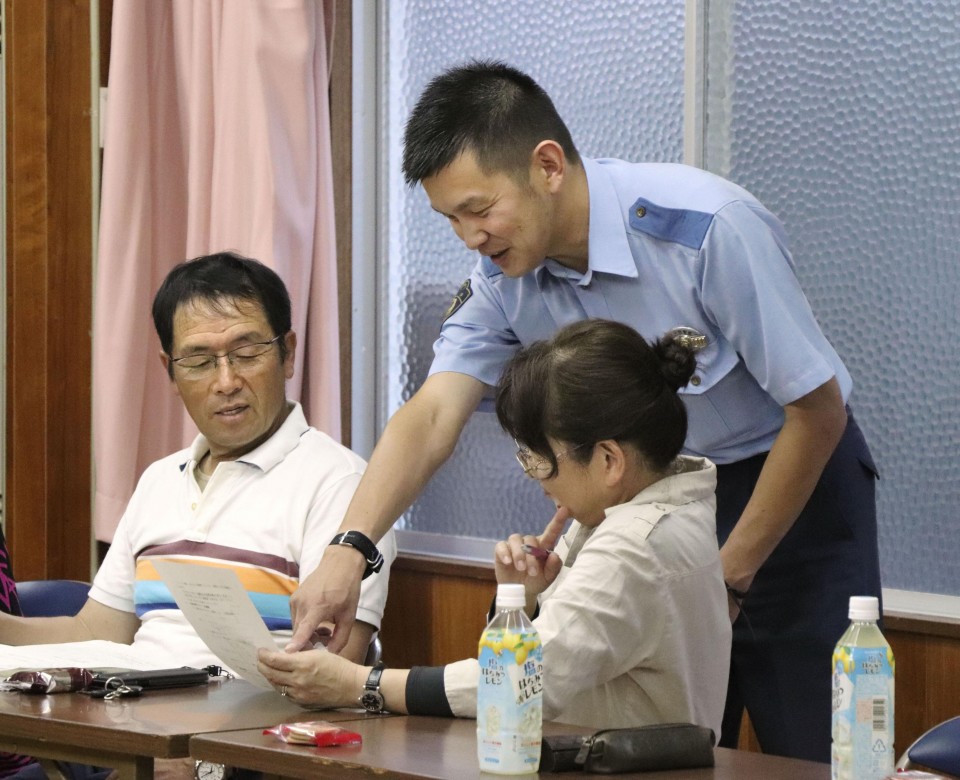 Aragane takes his responsibility seriously, spending several weeks to prepare study materials for the one-hour classes that are held twice a month on weekday afternoons at a local community center.

At the second class in mid-July, 25 people aged between 31 and 90 gathered.

"'Ireum' means 'name'," Aragane explained. The residents then got in pairs and practiced conversations, saying, "ireumunyo?" (your name?) and "ireumun morago hamnika?" (what is your name?)

Aragane said there were two reasons why he accepted the teaching work.

Firstly, he would be happy if the foreign visitors are impressed by local residents' efforts in trying to speak Korean, thus leading them to recommend the island to their friends.

Secondly, he hoped that if studying Korean helps residents come together, it may also lead to improvements in traffic safety and security on the island.

Aragane's current goal is to support the residents so that they can gain confidence in speaking Korean at a major olle event in October, with the plan being that they surprise their South Korean visitors by welcoming them in their native tongue. 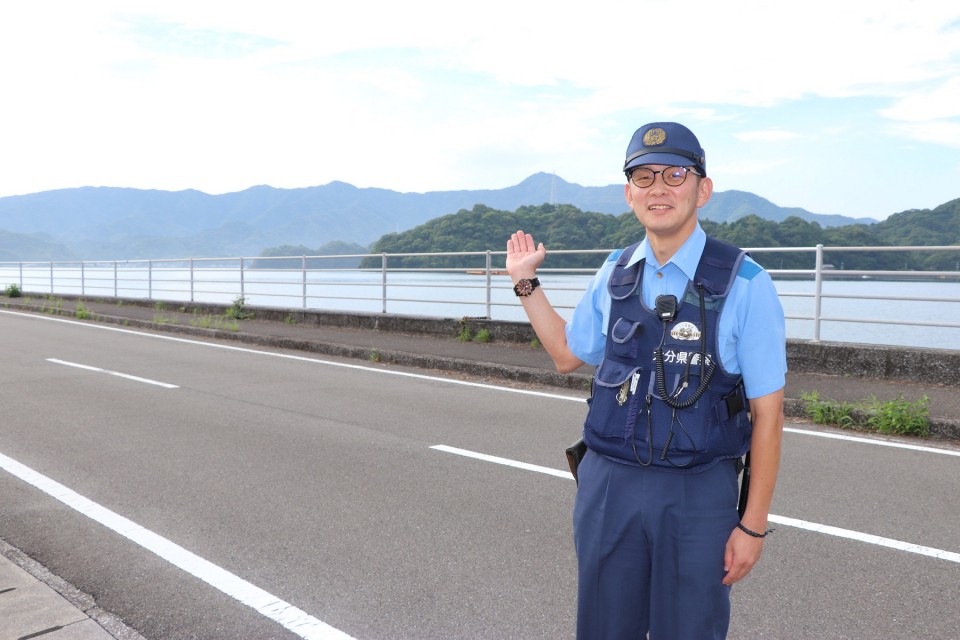