North Korea had urged Seoul to halt the military drill with Washington for the last month, but Tuesday's state-run media criticized the United States by name, suggesting Pyongyang may reconsider resuming denuclearization talks.

The projectiles fired from South Hwanghae Province in the southwestern part of North Korea flew about 450 kilometers while reaching an altitude of about 37 km, the Joint Chiefs of Staff said. It is the country's fourth such launch in less than two weeks.

Seoul said the projectiles fired Friday, whose maximum velocity was more than Mach 6.9, appear to have had similar flight characteristics as the short-range ballistic missiles launched on July 25.

A Japanese government source also indicated the projectiles may be short-range ballistic missiles, whose testing by the North is banned under U.N. Security Council resolutions. 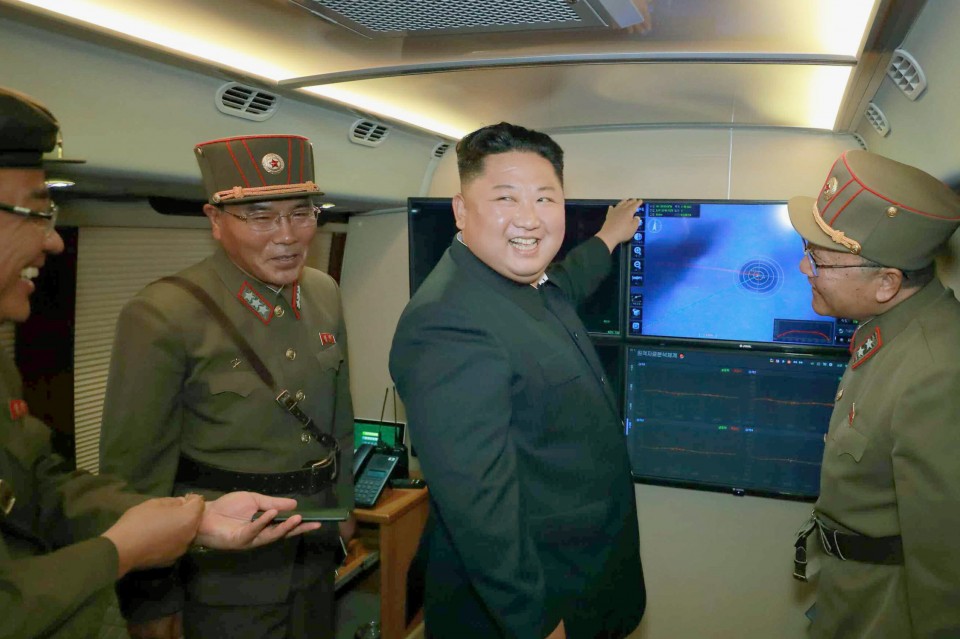 The Japanese government said the projectiles did not reach Japan's 200-nautical-mile exclusive economic zone, or its territorial sea or land.

The JCS said the projectiles were launched at around 5:24 a.m. and 5:36 a.m. from the Kwail area of South Hwanghae Province, which faces the Yellow Sea.

A North Korean Foreign Ministry spokesperson, in a statement carried by its official media, condemned the U.S.-South Korea joint military exercises for "simulating a surprise and preemptive attack" on Pyongyang and said it may be forced to "seek a new road."

"Despite our repeated warnings, the United States and South Korean authorities have finally started the joint military exercise targeting the DPRK," the official said via the Korean Central News Agency, using the acronym for the North's official name, the Democratic People's Republic of Korea.

"This is an undisguised denial and a flagrant violation of June 12 DPRK-U.S. Joint Statement, Panmunjom Declaration and September Pyongyang Joint Declaration, all of which are agreements to establish new DPRK-U.S. relations and build a lasting and stable peace regime on the Korean Peninsula."

"The U.S. and South Korean authorities remain outwardly talkative about dialogue. But when they sit back, they sharpen a sword to do us harm. If this is what they call 'creative approach' and 'imaginative power beyond common sense,' we will be compelled to seek a new road as we have already indicated."

The North launched short-range ballistic missiles on July 25, followed by an announcement a day later that the launch was a warning against South Korea for planning a joint military exercise with the United States.

The United States and South Korea have indicated that the projectiles were short-range ballistic missiles.

The scaled-back combined command post exercise between the U.S. and South Korean forces will be held through Aug. 20. It aims to test South Korea's capability to retake operational control over its forces from the United States during wartime.

It mostly involves computer simulations, not mobilization of troops or military equipment.