The state is planning to allow donations to the Kyoto-based animation producer to be fully treated as deductible expenses by having them delivered through local governments, they said.

It is unusual for the government to consider giving preferential tax treatment to support a specific company. The initiative was proposed by a group of lawmakers late last month and Chief Cabinet Secretary Yoshihide Suga pledged to deal with the issue after receiving their suggestions.

When companies make donations to a specific firm, there is a limit on the size of deductible expenses that are calculated based on such factors as donors' capital stock and income. The condition is believed to have curbed corporate financial support.

Financial aid to a specific company by individuals is not eligible for tax breaks. Meanwhile, all donations either from companies or individuals to local municipalities can be treated as deductible expenses. 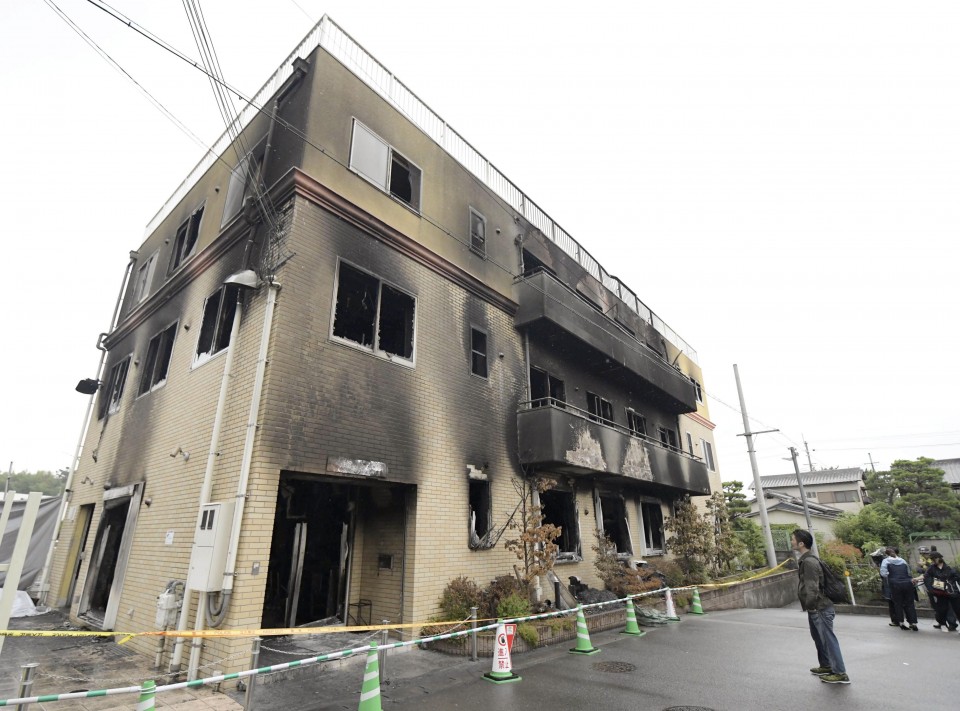 The Economy, Trade and Industry Ministry, the Finance Ministry and the National Tax Agency will work out details of the scheme on tax breaks for Kyoto Animation-bound donations, the sources said.

"Although specific details are yet to be decided, we are studying what kind of scheme is desirable," industry minister Hiroshige Seko told a news conference Thursday.

Tax authorities have pointed out that establishing a scheme to have donations delivered through local governments just to support a specific company could be interpreted as an act aimed at circumventing the law.

Therefore, one option being considered is to apply the envisioned scheme more generally to support companies that have become victims of crimes, not only Kyoto Animation, the sources said.

Kyoto Animation, often affectionately referred to as "KyoAni" by fans, is known for works such as "K-On!" and "The Melancholy of Haruhi Suzumiya," which depict the everyday lives of high school girls.

A studio of the company in Kyoto's Fushimi Ward, the center of its anime production, was set ablaze in the attack on July 18, leaving 35 people dead and dozens injured.

The suspect, Shinji Aoba, spread and ignited gasoline inside the three-story building but has since remained hospitalized with severe burns. Police are waiting for him to recover before they serve him with an arrest warrant for murder and arson, among other charges.