Companies in Japan that allow employees to bring their pets to the workplace are drawing attention and even enjoying unexpected benefits.

One company says it is getting the pick of qualified recruits among cat-lovers, while the feline presence leads to a less stressful environment and better focus among its employees. 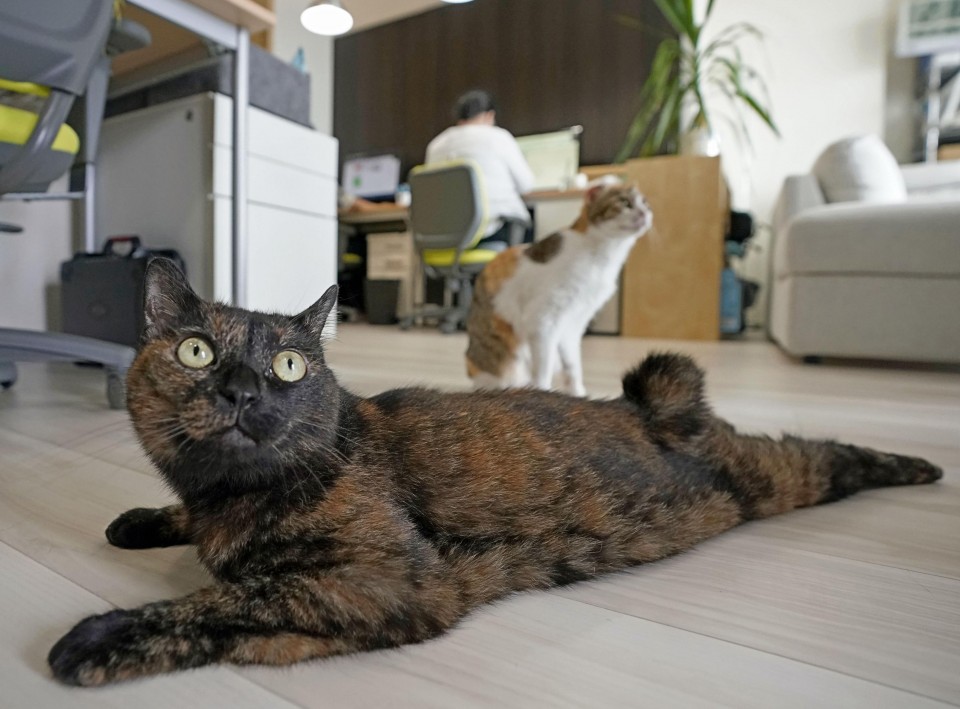 Although there are still only a limited number of pet-friendly companies in Japan, more people, especially among the younger generation, are starting to take notice.

Ferray Corp., a Tokyo-based information technology company, has permitted employees to bring their feline companions to its office in Chuo Ward since it was founded in 2000. At present, six cats "commute" with their owners on foot, aboard bicycles or by train.

A new employee is tasked with feeding all the cats twice a day, but any employee can take a cat for its toilet break or let it play whenever he or she recognizes the need to do so.

Since Ferray started posting photos of the cats on the company's Twitter account, it has come to be known as "the company where you can work with cats."

Indeed, applications for participation in recruitment seminars or internships among students approaching graduation have increased sharply. And for Ferray, being a company that allows cats to sprawl around its office has other advantages, such as leading to more business orders from clients who love pets.

"Some of our equipment gets damaged sometimes but the benefits overwhelmingly outweigh the costs," said Ferray President Hidenobu Fukuda, 48.

Ferray pays a monthly allowance of 5,000 yen to any employee who adopts an abandoned cat to save it from being put down at a public health center.

"Saving cats from being slaughtered contributes to society," said Fukuda. 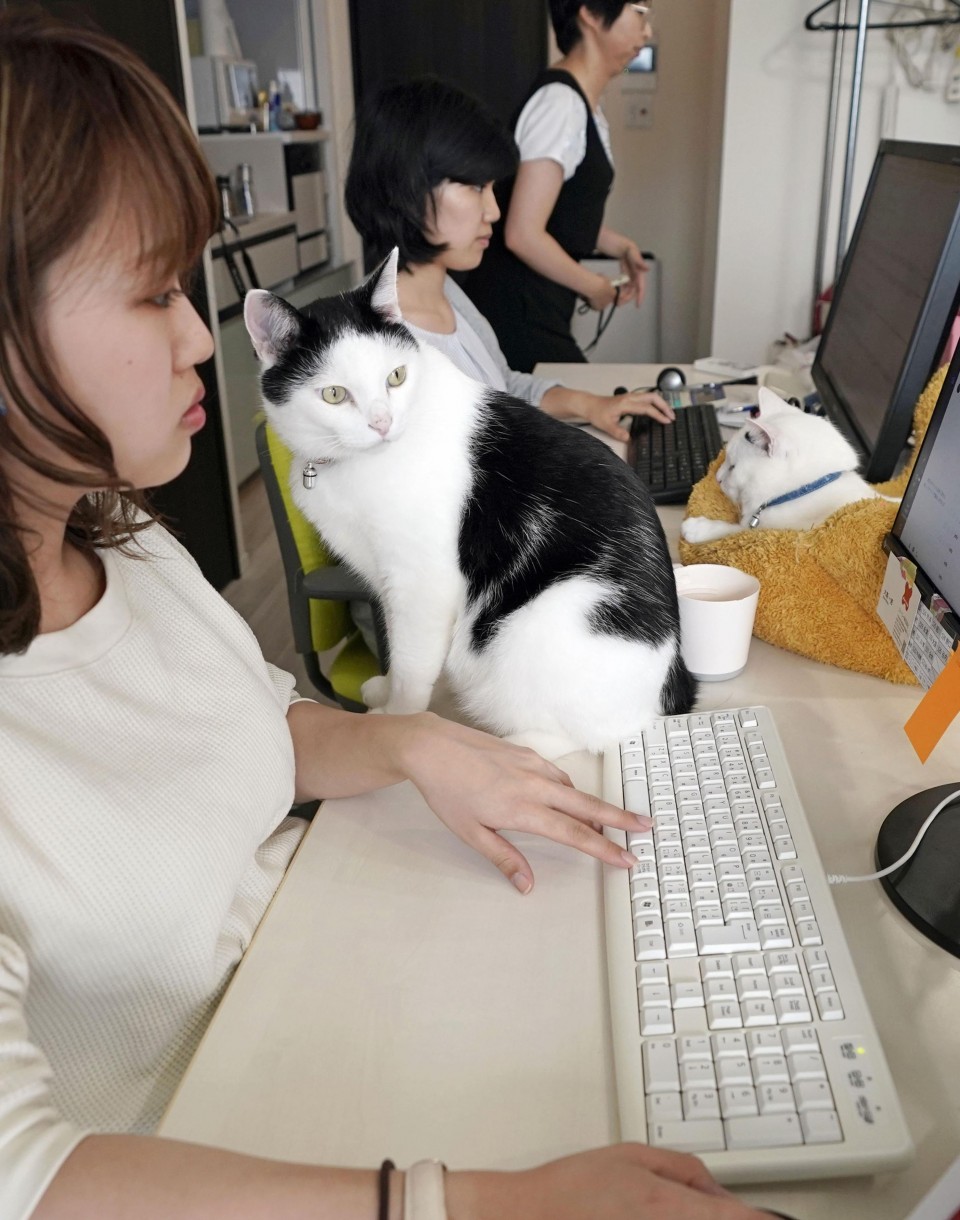 Shino Tashiro, a 27-year-old web designer at Ferray, became aware of the cat-friendly company four years ago while she was job-hunting in college.

A cat-lover herself and living alone, Tashiro took in an abandoned cat she named Subaru after joining the company. Now she commutes to work with her cat by bicycle or train, almost daily.

"Subaru takes going to the office for granted," she said, adding that the presence of cats in the office "helps us employees feel comfortable with each other and brightens the workplace."

UGpet Inc., a maker of pet supplies in Kawasaki, Kanagawa Prefecture, has a "day-care center" for employees' dogs.

"Employees can work better because they bring their pet dogs to work and don't have to worry about them when they're away from home," said Yuji Yoshitake, 35, president of the company, who commutes to the office with his toy poodle Kurumi. 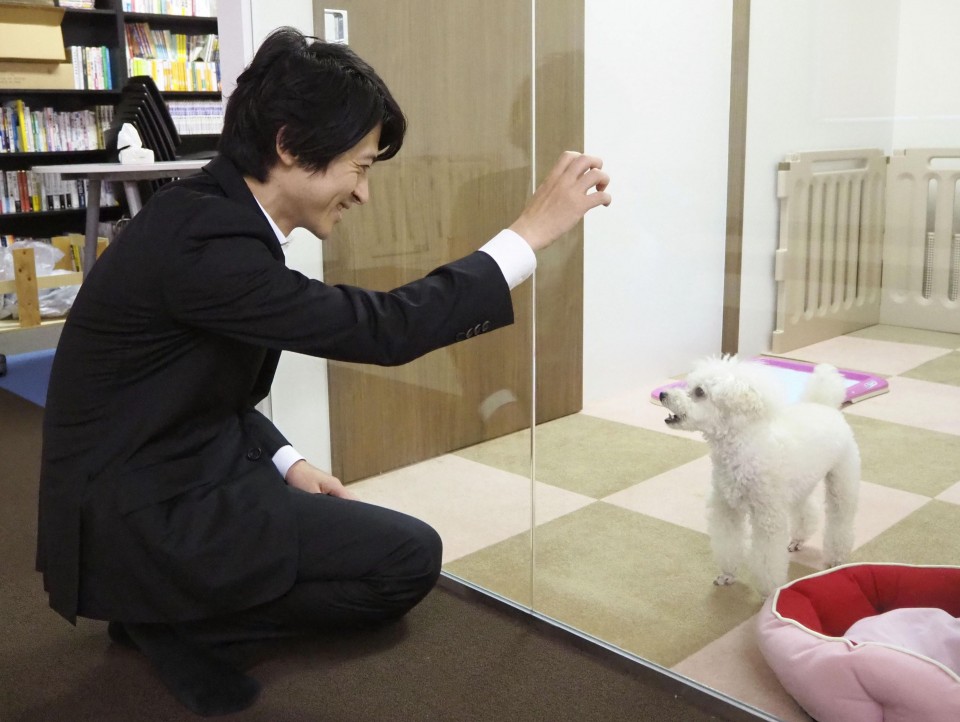 Recognizing that not all employees will be enamored by dogs, UGpet has created a glass-walled section almost 4 square meters in area furnished with a bed and toilet to house the pooches.

As long as the dogs have been vaccinated and house-trained, they can be kept in the space, with the owners able to check on them while they're working. During lunchbreaks, employees can take their dogs for walks or feed them.

Yoshitake said there is an added benefit for the company -- it can get the dogs to sample its pet food products to help it determine a pooch's preferences.

Over 3 mil. freelancers in Japan amid rise of flexible working styles

Prevention of animal hoarding takes on urgency in aging Japan