The mental toughness Japan have been developing over the last few years -- first seen in a 2013 win over Wales in Tokyo -- once again came to the fore Saturday as they kept alive their hopes of winning some silverware even before the Rugby World Cup kicks off.

The Brave Blossoms put aside the absence of their head coach, an early yellow card to Kotaro Matsushima and some worrying penalties to ensure Tonga were never in the Pacific Nations Cup game at Hanazono Rugby Stadium, running out 41-7 winners in stifling heat and humidity.

With the forwards showing the benefits of the Miyazaki "Camp of Hell," and the backs making good use of the ball that came their way, the Brave Blossoms put in a performance that will have worried their World Cup Pool A opponents, particularly the speed at which they played the game.

That was evident in the second half when Michael Leitch tried to get the referee to make an instant decision on an issue brought up by the TMO, as the Japan captain did not want to give the Tongans time to catch their breath. 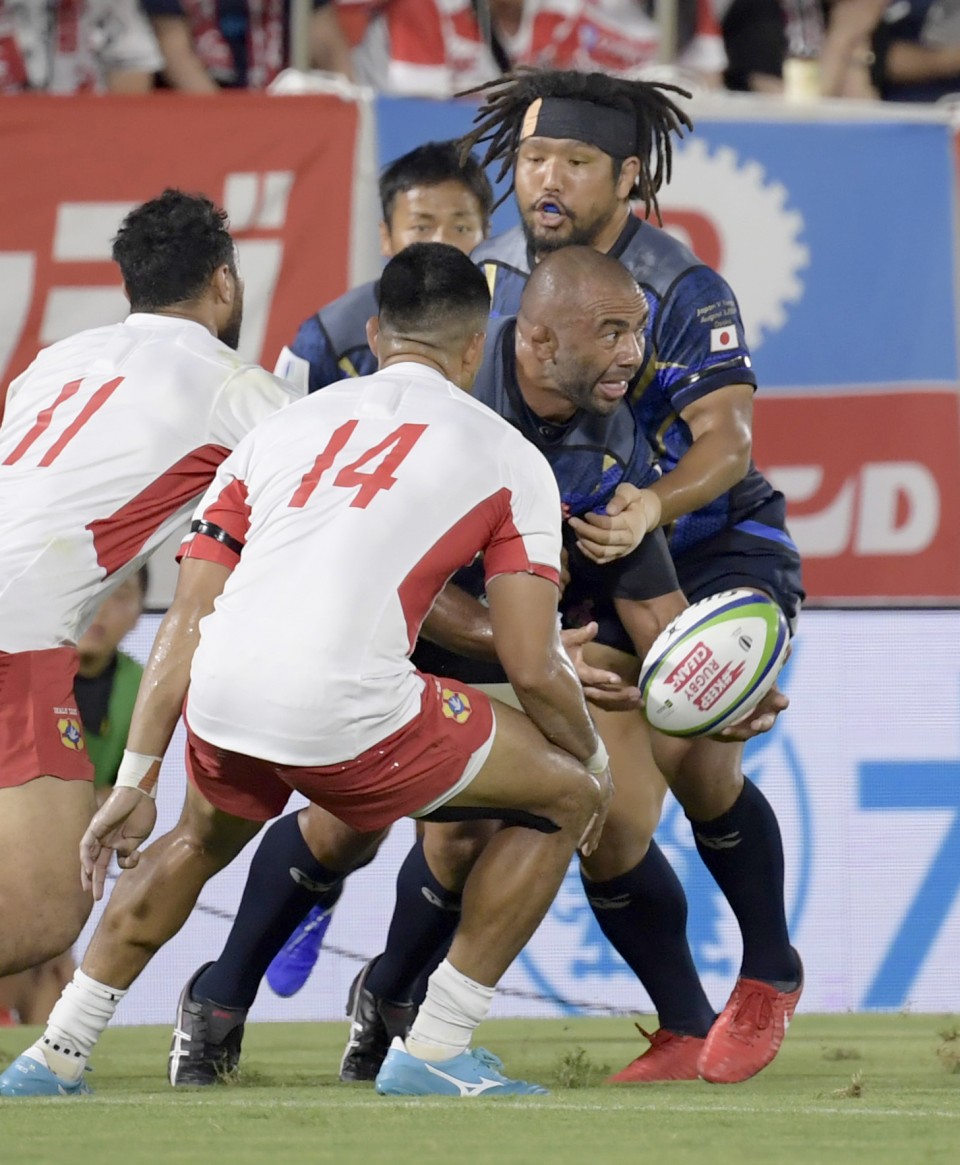 "We knew the game would be tough in terms of Japan's speed," said Tonga captain Siale Piutau. "From my time playing here (for Yamaha Jubilo) we also know Japan are very good tacklers and they have aggressive line speed and we saw that tonight."

The defensive effort certainly impressed Tony Brown, who took over as head coach for the game after Jamie Joseph flew home earlier in the day following the death of his mother in New Zealand.

"I thought our defense was outstanding at times," said the former All Black. "We put in a big effort (in training) on the collisions and every player tonight dominated defensively."

Time and time again a big Tongan -- and they do not get any bigger than replacement prop Ben Tameifuna who weighs in at 155 kilograms -- would be met by a Japan player, often two, who would then drive the attacker back in the tackle.

Joseph will rejoin the team next week in Fiji for the winner-takes-all clash with the United States. And he is set for a tough few weeks as he looks to cut his squad down to 31 before the World Cup deadline at the end of August.

In the forwards, Yoshitaka Tokunaga, the ageless Luke Thompson and Leitch must have pushed Amanaki Lelei Mafi hard for the sword of honor, which is presented by the team to their man-of-the-match. While in the backs, Yu Tamura, Yutaka Nagare and Matsushima also impressed as did Kenki Fukuoka in his brief cameo off the bench.

Not that Leitch was too pleased with his own performance, giving it a two out of 10, as opposed the eight he gave the side.

Uwe Helu, however, was impressed with the way Matsushima and Fukuoka rounded off the scoring following an indifferent second half.

"We just needed to keep the ball, because the space was outside. Then we can just give it to those fast guys because we know they will finish it off," said the Tongan-born replacement lock, who admitted to being very emotional during the national anthems. 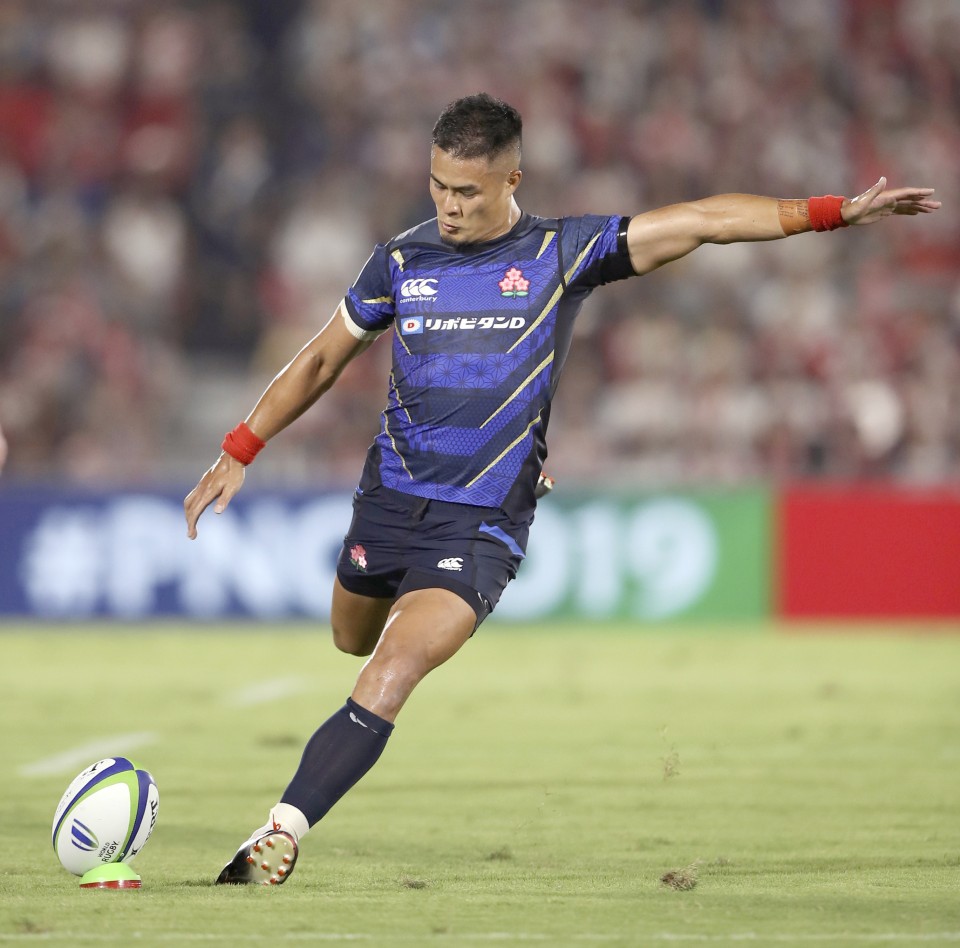 Nagare and Tamura followed their game plan to the letter, putting in telling kicks into space that gave Japan good position from which to attack, and just as importantly, did not allow the 'Ikale Tahi a chance to counter-attack.

The only criticism of the pair is that neither really has a running game to keep the opposition on their toes, but Tamura showed great hands in putting Timothy Lafaele away for a try with a beautifully delayed pass.

In all likelihood, Japan will have to beat either Scotland, Ireland or both to have any chance of making the quarterfinals of the World Cup for the first time. And the two Celtic nations will have noticed one of the few negatives from the performance -- namely Japan's struggles in dealing with overseas referees' interpretation of the laws at scrum time and at the breakdown.

"There were a lot penalties at the breakdown so that's something to work on this week," said Japan wing Lomano Lava Lemeki, adding "Quality teams like Ireland and Scotland will take their chances" if Japan do have a man in the sin bin.

Leitch agreed, saying the team still had plenty to work on ahead of next week's clash in Fiji against the U.S. Eagles, led by former Kobe Kobelco Steelers boss Gary Gold.

But the overall feeling was positive and the players look to be building well for the World Cup.

Some silverware before they play Russia in the World Cup opener on Sept. 20 in Tokyo would be an added bonus as far as their RWC preparations are concerned and would particularly delight Helu.

"I'm really looking forward to next week," he said. "In my career, I've never won anything so it's a chance to get a little trophy for the first time."