Japan, China agree to work for success of Xi's visit as state guest

Japanese and Chinese foreign ministers agreed Thursday to make coordinated efforts for the success of Chinese President Xi Jinping's planned visit to Japan as a state guest next spring, with ties between the neighbors improving.

At their talks in Bangkok, Japanese Foreign Minister Taro Kono also urged China to lift restrictions on imports of Japanese food that were put in place after the 2011 Fukushima nuclear disaster, a Japanese official told reporters.

Chinese Foreign Minister Wang Yi, at the outset of the meeting, said, "We hope that bilateral relations will develop in a correct, heathy and stable manner." Kono echoed a similar view.

During their summit on the fringe of the Group of 20 summit in Osaka in June, Japanese Prime Minister Shinzo Abe and Xi confirmed that they will work together to realize a trip by the Chinese president to Japan as a state guest "when cherry blossoms bloom."

The two countries have pledged to promote reciprocal visits by leaders of the two nations. 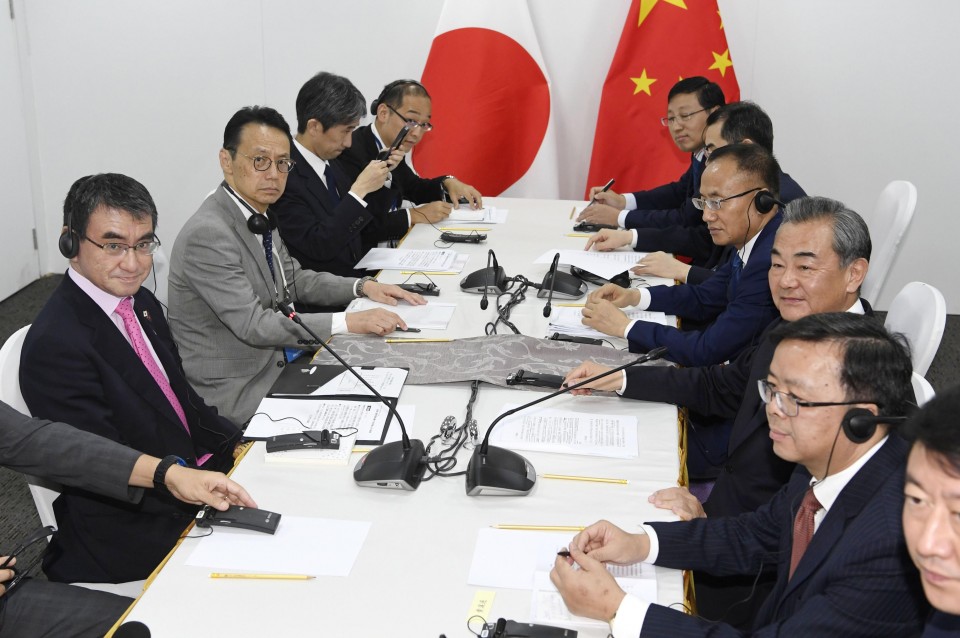 Kono, meanwhile, was quoted by the Japanese official as asking for China's positive approach to issues such as the repeated entry of Chinese vessels into Japan's territorial waters, food import restrictions and the detention of Japanese citizens in China.

Focusing mainly on bilateral matters at Thursday's foreign ministerial talks, Kono and Wang did not exchange views on issues related to North Korea, including the recent missile launches, the official said.

Tensions between the two countries intensified after the government of Prime Minister Yoshihiko Noda, Abe's predecessor, decided in September 2012 to bring the uninhabited Senkaku Islands in the East China Sea under state control.

The Senkakus, called Diaoyu in China, are administered by Japan but claimed by China.

The relationship between the two nations appears to have changed recently, with last year's 40th anniversary of the bilateral Treaty of Peace and Friendship serving as an incentive to forge better ties.

Beijing has also been attempting to improve relations with its neighbors, as this year marks the 70th anniversary of the founding of the People's Republic of China, led by the Communist Party.