Shiitake farmer looking to build on her mushrooming success

For Kaori Nukui, farming is a creative endeavor. She produces Japanese tea and log-grown shiitake mushrooms, but she does it in a way that allows her to make unique products with a playful twist.

Two of the products in the range created by Nukui, a 41-year-old former public relations consultant from Saitama Prefecture near Tokyo, are "dashi" stock powder packed with the tasty umami flavor derived from shiitake, and roasted-tea-flavored craft beer.

"As a farmer, I want people to enjoy what we make. That drive has led me to propose various ways of appreciating (our products)," Nukui said. 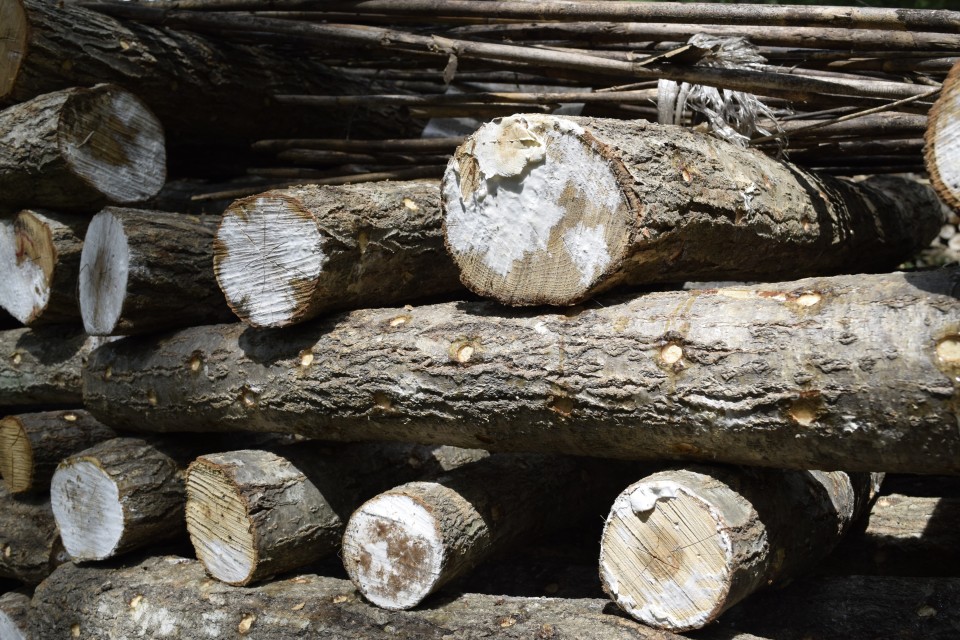 Other products she created include jarred tomato sauce with shiitake, a shitake-infused soy sauce, and tea-flavored milk confiture.

Nukui was born into a family that runs Nukuien, a tea farm with more than 100 years of history in the city of Iruma on the far outskirts of Tokyo's giant metropolis and at the foot of the mountainous Okutama area.

When her father was 32 years old, he started farming log-grown shiitake during the winter to supplement his income when tea was in the off-season.

Log-grown shiitake, which are often cultivated by planting spores in logs left in a forested environment, require more time and care to farm, compared with those farmed on mushroom beds.

One of the most labor-intensive tasks is replacing the lined logs as well as flipping them over to help the spores spread evenly, Nukui said. There are about 30,000 logs in Nukuien, and all the work is done by hand. 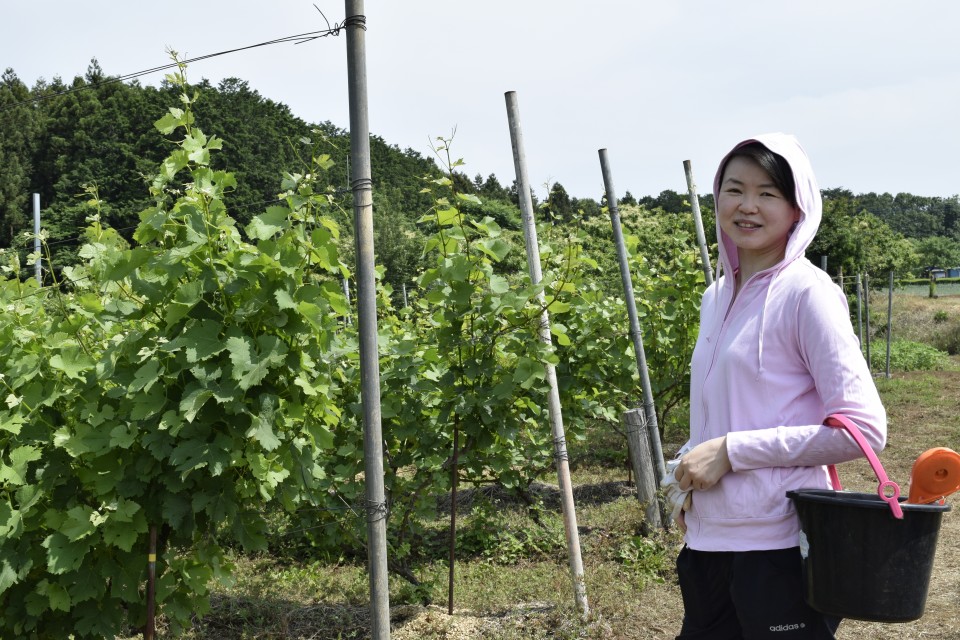 (Kaori Nukui stands in front of her vineyard)

Of the total shiitake produced in Japan, log-grown mushrooms accounted for about 9 percent in 2017, while the rest were grown on mushroom beds. The price of shiitake depends on the size of the mushroom, regardless of how it was grown, according to Nukui.

The Iruma farm's shiitake, which can be harvested from September to June, are meatier and thicker than those grown on beds and have firm textures, the farmer said.

Over about 30 years on his property, Nukui's father has won numerous awards from the farm ministry for his shiitake growing techniques, but having her father's skills handed down to her or working in the agricultural sector, generally, was not something Nukui had ever imagined. Her father did not ask her or her two younger sisters, who work off the farm, to aspire to follow in his footsteps, either.

After earning a bachelor's degree in economics, Nukui joined a small startup recruitment company and then moved into PR consultancy.

"I did learn the joy of working in those companies for seven or eight years, but during my work in supporting clients' businesses, I realized I wanted to try something original," Nukui said. "That's when I thought it might be interesting to try expanding our family business." 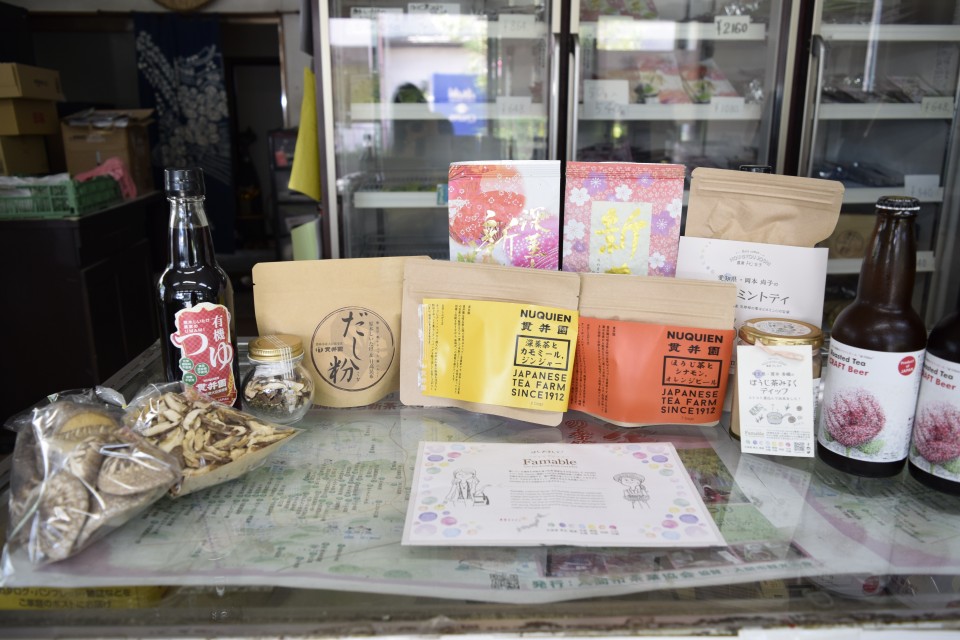 At the age of 29, she returned home from Tokyo and started learning about tea and shiitake -- from the ground up.

While working at her farm, her inquisitive mind and project planning skills helped her expand her network, linking herself up with a range of people from top chefs to government officials, and brought new perspectives to Nukuien products.

In addition to local supermarkets, she started distributing Nukuien's fresh shiitake to restaurants, including those with Michelin stars in Tokyo and its vicinity, after becoming friends with a chef she met while enjoying a glass of wine, one of her favorite activities.

Nukuien's mushrooms became known to chefs through word of mouth. Many praise their texture and rich aroma, Nukui said, adding not many of the shiitake in the market are distributed in good condition.

The Saitama farm delivers its fresh shiitake daily. This system enables the farm to service supermarkets while also responding to chefs' orders quickly so the mushrooms can be dispatched on the day they are picked, seven days a week. 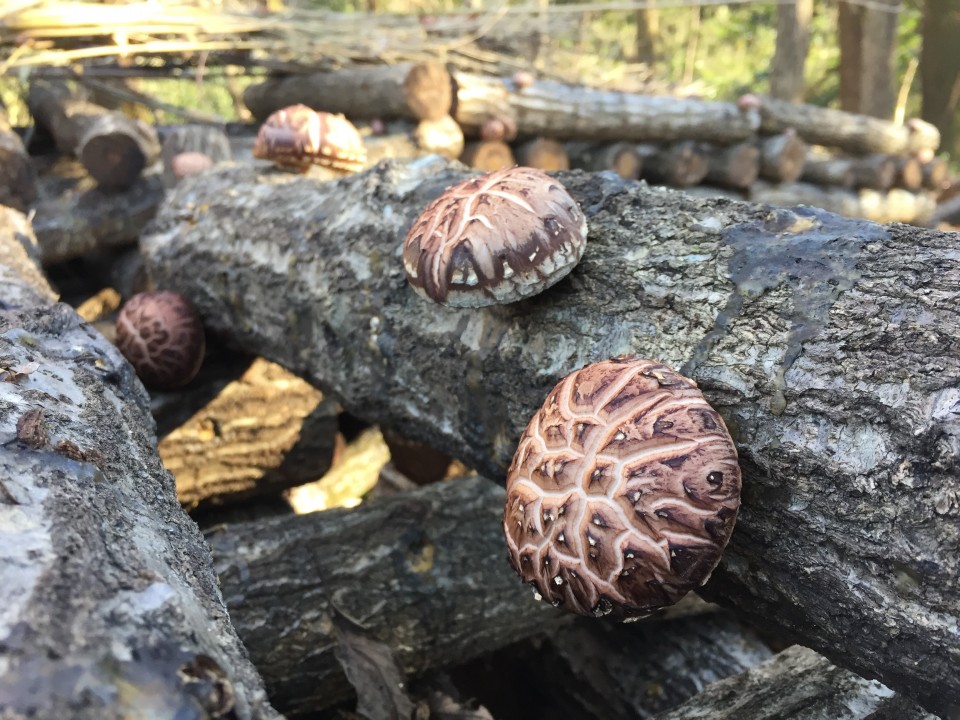 "Keeping the good quality cannot be done without the strong intention of doing so, because mushrooms go bad easily," Nukui said, stressing the pride she has in her farm's shiitake.

She also started to export Nukuien's tea products to a specialty Japanese grocery store in France in 2012 and has since shipped shiitake products as well.

"I haven't done networking for the sake of sales," Nukui said, adding she has just followed her interests and enjoys seeing how her connections with people can lead to the development of new projects.

When Nukui was offered a chance to hold a temporary exhibition sale at a Japanese department store in Hong Kong in January 2017, she asked other women to join her, using a female farmers' network set up by the Ministry of Agriculture, Forestry and Fisheries.

"If I went (to Hong Kong) alone, the fair would have been just a small tasting event. I thought it was more fun with a variety of farmers at one place," she recalled. Several people in Hong Kong who tasted Nukuien's products were impressed and purchased the items on the spot, she said.

For their second promotion event about nine months later, Nukui planned a cooking and tasting experience in collaboration with ABC Cooking Studio International, the Hong Kong branch of a Japanese company that conducts cooking classes in several countries in Asia.

But she did not stop there. During the events, she realized that their products would be more attractive if they were sold under a single brand name.

After discussions with a designer she met during the Hong Kong exhibition fair, she created a brand she dubbed "Famable" -- a portmanteau of the words "farmer" and "marbles" -- the latter a reference to the many colors of marbles used in the kids game, a parallel she draws to the diverse range of products that Japanese female farmers produce.

The brand is open to new female farmers in Japan interested in selling products at stores or online under the project, said Nukui.

Famable will concentrate on growing in Japan for the time being to raise funds to use in making an overseas push, Nukui said.

"There are so many ideas I want to follow through on," she said. "Preserving log-grown shiitake is, of course, something I should work on, and some creative thinking is required to clear obstacles such as the high costs."

She is determined to produce good-quality tea and shiitake and cherish the customers who have supported Nukuien's products. But at the same time, Nukui said she has a long-term vision to turn her love for wine into a business, adding it to her other farming activities.

Just like her father started shiitake farming in addition to tea, Nukui began a small wine grape-growing effort last year, after studying viticulture and winemaking in her spare time.

"I hope that one day the wine will become my signature product to be enjoyed by people who find my work fun or interesting," she said.