Japan, South Korea to maintain dialogue, though no detente in sight

The foreign ministers of Japan and South Korea were unable to make any significant progress Wednesday in settling a diplomatic feud between the neighboring countries over wartime history and trade, although they agreed to maintain dialogue to work toward a detente.

"Even in such a difficult situation, I think we can work toward a solution by having these very close discussions," Japanese Foreign Minister Taro Kono said after a meeting with his South Korean counterpart Kang Kyung Wha on the outskirts of Beijing.

Relations between Tokyo and Seoul have sunk to the lowest point in years following a series of South Korean court decisions ordering compensation for forced labor during Japan's colonial rule of the Korean Peninsula from 1910 to 1945.

Japan has railed against the rulings, saying the issue was settled by a 1965 bilateral accord under which it provided South Korea with a $500 million lump sum.

Kono told reporters he repeated calls for South Korea to "take appropriate action" to correct what Japan sees as a violation of an international treaty. 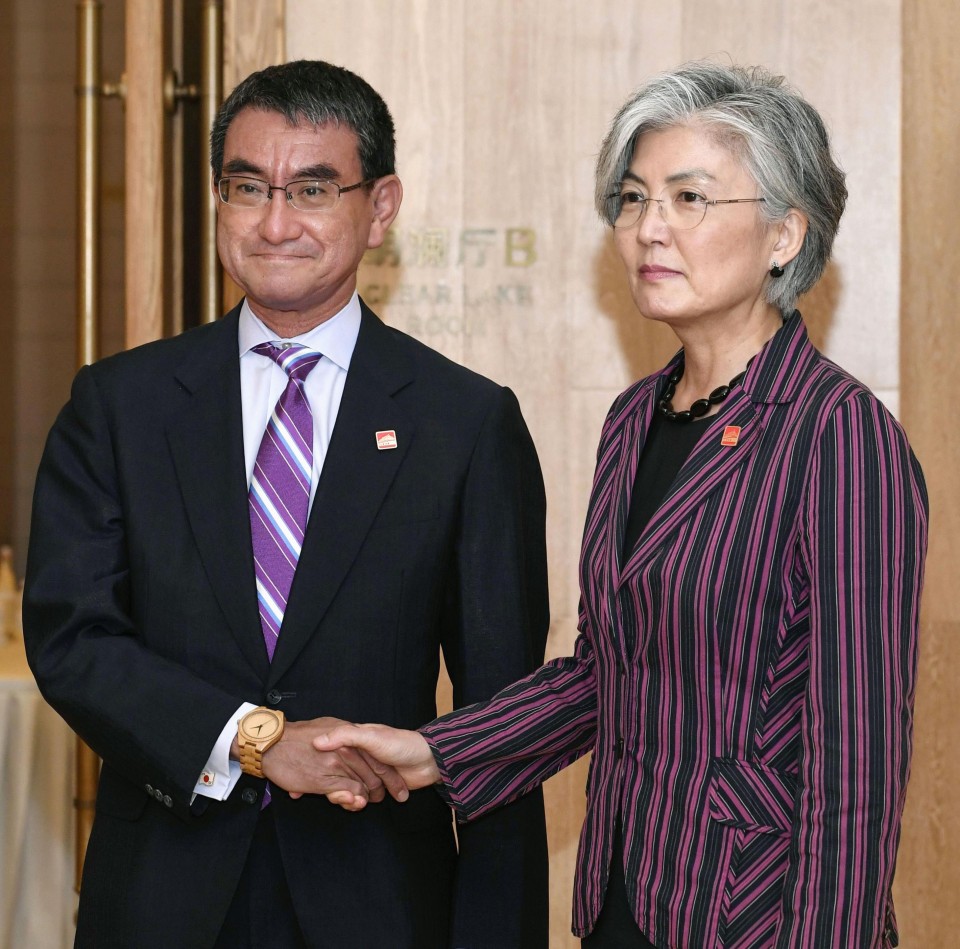 Seoul, meanwhile, has criticized Tokyo's decision to tighten trade controls on its neighbor, saying the measures are retaliation and go against the spirit of free trade.

In the meeting, their first face-to-face since early this month in Bangkok, Kang expressed deep dissatisfaction with the tighter trade controls and called on Tokyo to undo them, according to a South Korean official.

On July 4, Japan began requiring case-by-case approval for exports of some materials that are crucial to the South Korean technology industry. Then on Aug. 2, it decided to remove South Korea from a list of countries that enjoy minimum trade restrictions on goods that can be diverted for military use.

South Korea has since taken Japan off of its own "white list" of trusted trade partners and announced tighter restrictions for importing coal ash and some waste recycling materials.

The tit-for-tat measures came amid a wave of outrage in South Korea over what is seen as Japan's failure to own up to wartime atrocities. Boycotts of Japanese products have sprung up across the country and some airlines have canceled flights between the two countries amid a wave of cancellations.

Kono said he expressed concern over growing anti-Japan sentiment in South Korea to Kang, asking for the safety of Japanese nationals to be ensured.

The growing enmity between the countries, both key U.S. allies in Asia, is threatening to undermine their cooperation over security issues such as threats from North Korea, which has carried out a flurry of short-range ballistic missile tests in recent weeks.

Kang told Kono that South Korea is "reviewing" whether to extend an intelligence-sharing pact with Japan that it has recently suggested it may pull out of because of the soured ties, according to the official.

The two countries are facing a deadline later this week for a decision on whether to extend the General Security of Military Information Agreement, or GSOMIA, for another year.

Kono said he discussed the pact with Kang but declined to give further details, only saying the pact is an important component of their security cooperation and should be maintained.

The two met after a three-way discussion with their Chinese counterpart Wang Yi in a resort area in the northeast of Beijing near the Great Wall.

South Korean visitors to Japan down 7.6% in July amid tensions