South Korean President Moon Jae In called on Thursday for a dialogue with Japan amid frayed bilateral relations over wartime history and trade policy, saying Seoul will "join hands" if Tokyo chooses the path of talks.

"Better late than never. If Japan chooses the path of dialogue and cooperation, we will gladly join hands," Moon said as he spoke at a ceremony in Cheonan, south of the capital Seoul, to mark the end of Japanese colonial rule 74 years ago.

Moon also made a conciliatory gesture to Tokyo, saying Seoul has "not dwelt on the past" and expressed "hope that Japan will play a leading role together in facilitating peace and prosperity in East Asia while it contemplates a past that brought misfortune to its neighboring countries." 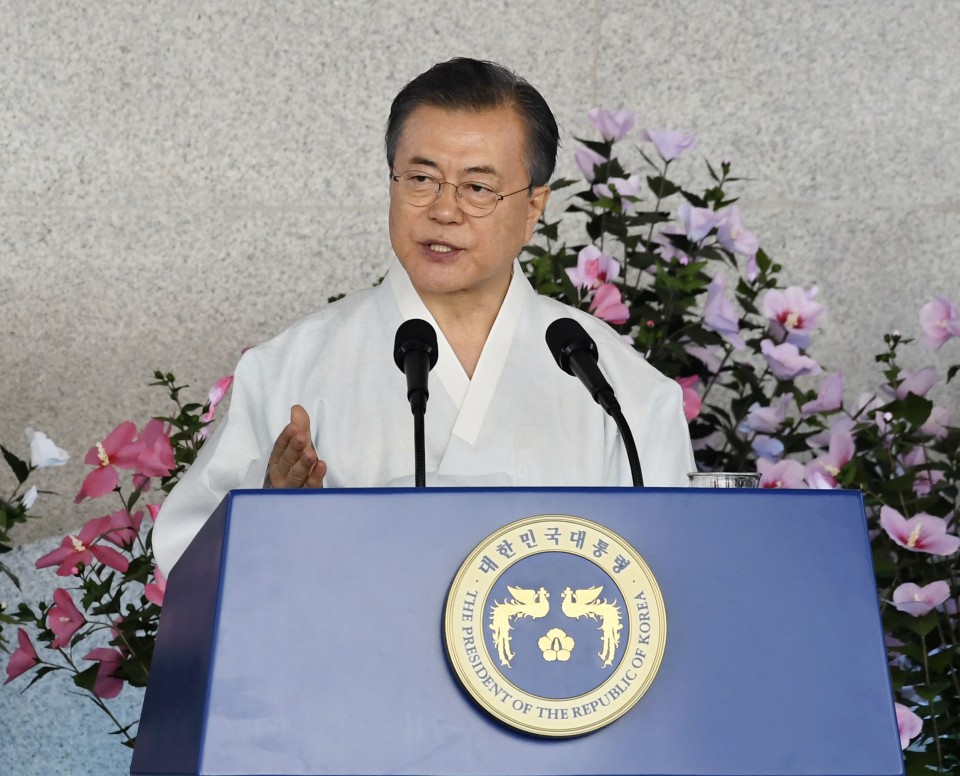 His speech came as ties between the two Asian neighbors sank to the lowest point in recent years after South Korean court decisions last year that ordered Japanese companies to compensate plaintiffs who claim to have been conscripted as laborers during World War II.

The compensation issue, which Tokyo claims to have already been settled by a 1965 bilateral accord, has recently escalated into tit-for-tat tightening of export controls.

Moon said his country aims to become an economic powerhouse despite Japan's tightened export controls. "In the face of Japan's unwarranted export restrictions, we will continue our determined march toward a responsible economic powerhouse," he said.

The president emphasized that the normal flow of trade could be disrupted if a country uses its comparative advantage in a sector, referring to Japan's move that requires manufacturers of semiconductor-related materials to seek approval each time before shipping to Seoul.

"If any country weaponizes a sector where it has a comparative advantage, the peaceful free trade order will inevitably suffer damage. A country that achieved growth first must not kick the ladder away while others are following in its footsteps," he said.

He explained that his government would channel efforts into improving competitiveness of domestic materials, parts and equipment industries, while enhancing cooperation between small and medium-sized enterprises and conglomerates to build "an economy that will never be shaken."

As for inter-Korean relations, Moon also highlighted his government's efforts to help keep a dialogue going between North Korea and the United States.

"In spite of a series of worrying actions taken by North Korea recently, the momentum for dialogue remains unshaken," he said, adding that Seoul is committed to denuclearization and bringing about peace on the Korean Peninsula during his term as president.

North Korea has recently fired a series of short-range ballistic missiles, which it claims to be "new-type tactical guided missiles," as a warning against South Korea-U.S. joint military drills that started on Aug. 5 and run through late this month.

U.S. President Donald Trump said last week that North Korean leader Kim Jong Un expressed displeasure at the military exercise in a letter to him and that the two leaders would have another meeting.

With ongoing provocative actions by Pyongyang, Moon may be well aware of people's concerns over forming a "peace economy" with North Korea as he suggested.

Moon reiterated that his government's intention is not to give unilateral aid to North Korea, but to promote mutual benefits.

"Both Koreas will be able to reduce not only huge defense expenditures but also the invisible cost of the division, the so-called 'Korea Discount,'" said Moon.

Japan seeks explanation of S. Korea plan to remove it from trade list