While the Association of Southeast Asian Nations has grown concerned about the impact on the region of trade tensions between the United States and China, the 10-member group has high hopes that Japan and China will step up cooperation in spurring the regional economy and development, according to a veteran Thai journalist.

Welcoming China's role as a major provider of economic aid and investment for ASEAN, Kavi Chongkittavorn, a columnist for The Bangkok Post and senior fellow at Chulalongkorn University, however, took a cautious view of Beijing's security posture, especially with regard to its militarization and recent missile tests in the disputed South China Sea.

Now that Tokyo-Beijing ties have improved markedly -- with China having warmed to Japan, a key U.S. ally, with no easy solution to the U.S.-China tariff war in sight -- Kavi pointed to the significance of a new Japan-China initiative for promoting joint economic cooperation projects in third countries.

"As the current ASEAN chair, Thailand would like the two countries to carry out more projects in the region, hoping that Japan will guide China into following international standards such as ensuring transparency in investment and debt sustainability of recipients," he said in an interview Wednesday in Bangkok.

The two governments launched the initiative during Japanese Prime Minister Shinzo Abe's visit to Beijing last October. Japanese and Chinese companies and economic organizations signed more than 50 projects in infrastructure, finance, information technology and other areas -- including one for the development of an energy efficient smart city in Thailand. 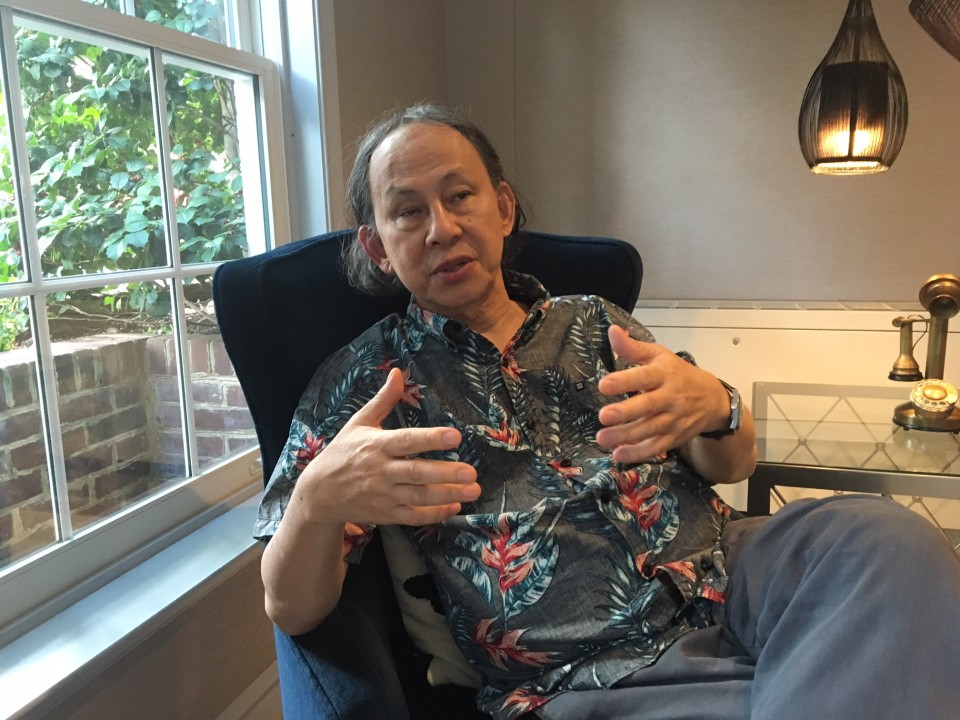 "Both countries have what the region needs," Kavi said, speaking on the sidelines of ASEAN-related foreign ministerial meetings in the Thai capital. "China has the capital and manpower, while Japan has the technological expertise and sophistication."

He also called for increased efforts by Japan and China to conclude negotiations this year for the Regional Comprehensive Economic Partnership, a 16-member Asia-wide free trade agreement he said is "pivotal in warding off future negative impact from uncertainties."

Kavi is a known regional affairs expert having written extensively on ASEAN and its external relations for four decades. He was a longtime journalist with The Nation, an English-language daily of Thailand, except for a 1994-1995 stint in Jakarta as a special assistant to the ASEAN secretary general.

Just as ASEAN policymakers do, he sees stable Japan-China and U.S.-China relations as vital for development and security of Southeast Asia, especially when trade tensions between Washington and Beijing -- the world's two largest economies -- have led to a slowdown in the global and regional economies.

Last month, the International Monetary Fund revised down an estimated 2019 growth rate of five ASEAN members -- Indonesia, Malaysia, the Philippines, Thailand and Vietnam -- by 0.1 percentage point from an April forecast to 5 percent. It compares with a 5.2 percent growth rate in 2018.

"The U.S.-China dispute was discussed seriously when ASEAN leaders met in June in Bangkok," Kavi said. "They wanted to know what would be the endgame, and most of all what would be the new U.S. objectives in Southeast Asia."

The U.S. withdrawal from the Trans-Pacific Partnership in 2017 has also increased uncertainties in the region given that President Donald Trump has weakened his nation's leadership in the advancement of free trade and multilateralism in pursuit of his "America First" policy.

In response to China's rising clout in the region both economically and militarily, Trump unveiled a free and open Indo-Pacific strategy during his first trip to Asia as president in November 2017. But he did not attend the East Asia Summit and the Asia-Pacific Economic Cooperation summit last year, raising doubts about the the superpower's commitment to the region.

While emphasizing the importance of de-escalating tensions in the South and East China seas, Kavi dismissed the suggestion that ASEAN should side with the United States and Japan in countering China, a country critics see as undermining the free, open and rules-based international order.

"ASEAN does not take sides between a rivalry between the United States and China, and Japan and China," he said, alluding to the bloc's reluctance to provoke Beijing, a major aid donor and trading partner. "We would like to maintain good relations with major powers including Japan, China and the United States."

Advocating an Indo-Pacific based on the rule of law -- not the use of force and coercion -- Japan has opposed China's muscle-flexing in asserting territorial claims in the South China Sea because Tokyo is also embroiled in a row with Beijing over the Senkaku Islands, a group of East China Sea islets administered by Japan but claimed by China and Taiwan.

China has conflicting territorial claims with four ASEAN members -- Brunei, Malaysia, the Philippines and Vietnam -- as well as Taiwan in the South China Sea, a strategic waterway through which more than one-third of global trade passes.

"ASEAN does not want to become a theater for major power rivalry," Kavi said. "What we expect Tokyo and Washington to do is to shape Beijing's behavior in a way that complies with international law and norms."