While Cambodia welcomes an ongoing influx of Chinese tourists, investment and development, the world at large increasingly suspects that China is launching a military buildup in the country for stronger Chinese influence in Southeast Asia.

Having obtained a 99-year land lease from the Cambodian government, the Chinese developer was allowed to develop on 36,000 hectares of land in the province, raising questions about China's intentions in Cambodia.

Washington has repeatedly shared its concerns about the matter with Cambodia's leadership.

But both the Cambodian government and the Chinese company denied the allegations and claim there is no hidden agenda behind the massive project.

Wang Chao, vice president of Union Group, said the $3.8 billion project is part of the "One Belt and One Road Initiative" of Chinese President Xi Jinping and purely for commercial and tourism purposes. 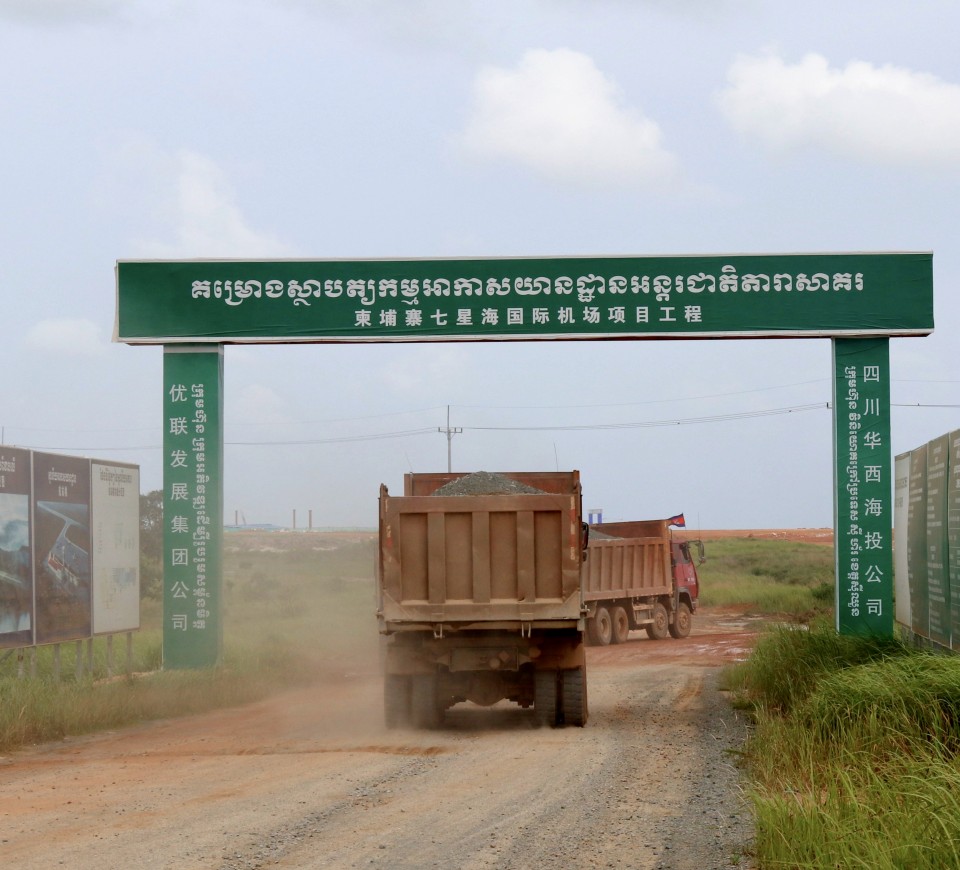 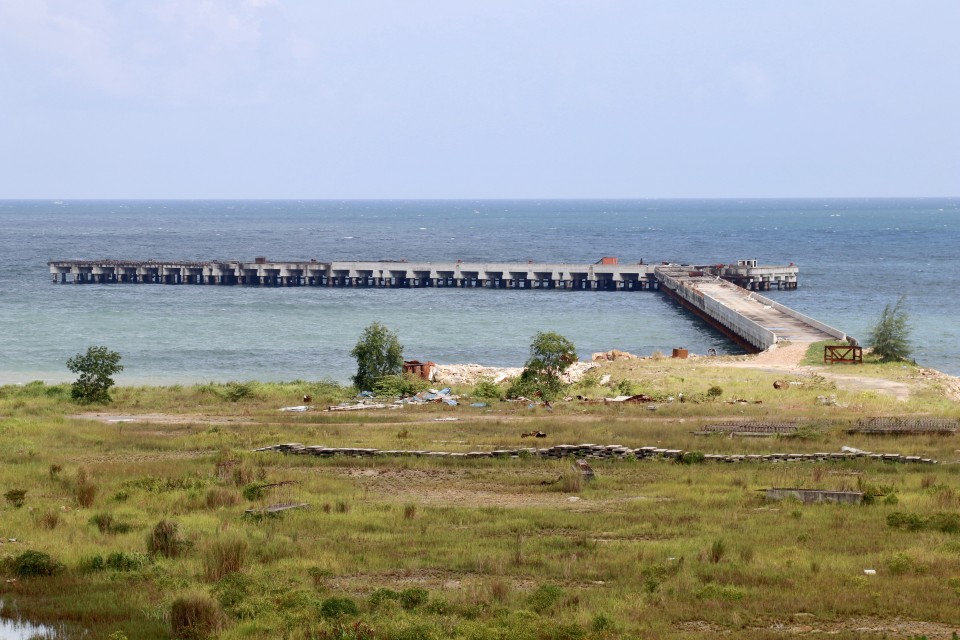 (A deep-water seaport is being built by a Chinese company at Dara Sakor resort.)

He said Union Group found the area to be ideal as it is close to a national park, standing on a coastline with a beautiful beach and suitable for a deep-water seaport.

Kyodo News reporters recently traveled to the site, where they witnessed extensive construction under way, with an 18-hole golf course, a hotel, and one casino already completed.

Dara Sakor International Airport, which has a 3-kilometer tarmac, is set to open in October next year. Once completed, it will be the largest airport in Cambodia, capable of handling Boeing 747s and Airbus A380s.

According to Cambodia's tourism statistics, 2 million out of 6.2 million foreign tourists who visited Cambodia in 2018 were Chinese. 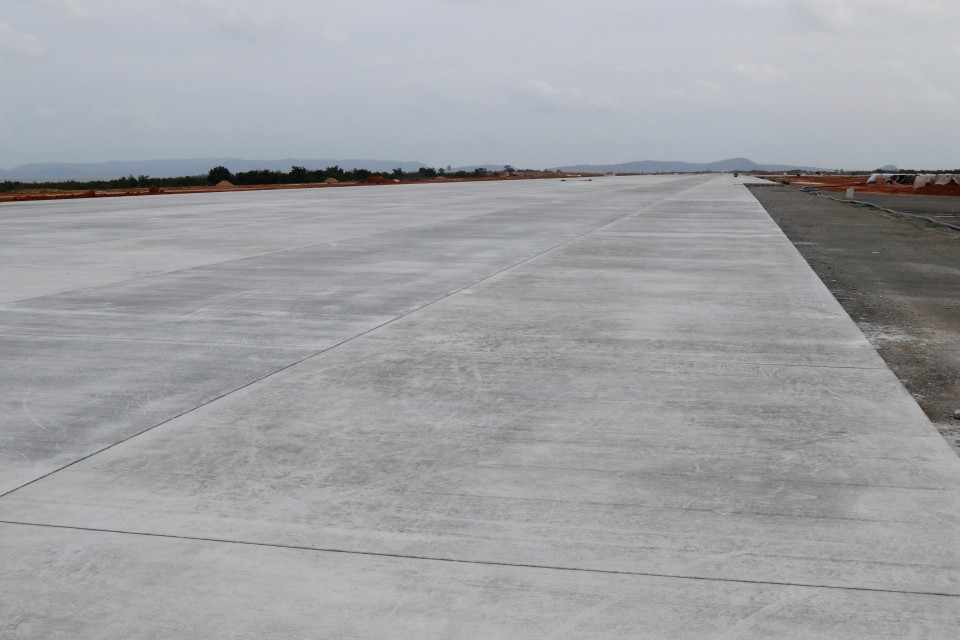 (Photo shows a 3.2 km runway being built by a Chinese company.)

The United States fears that China's presence will ultimately increase its capacity to enforce territorial claims and economic interests in the South China Sea, where it is engaged in a territorial dispute.

The dispute involves China and four members of the Association of Southeast Asian Nations -- Brunei, Malaysia, Philippines and Vietnam. Vietnam, Cambodia's neighbor in the east, has been strongly critical of China's behavior in pressing its claims in the South China Sea.

For about a year now, Chinese have been seen moving further to several parts of Cambodia including those along the country's border with Vietnam to pursue business opportunities, particularly where gambling is allowed.

Citing unnamed U.S. officials, the Wall Street Journal reported last month that China has signed a secret agreement with Cambodia that would allow Beijing to use Ream naval base, strategically located in southern coastal Cambodia.

According to the Journal, an early draft of the deal, seen by U.S. officials, would allow China to use the base for 30 years, with automatic renewals every 10 years after that. China would be able to post military personnel, store weapons and berth warships, according to the draft.

Ream naval base is located not far from the new airport, images of which show what appear to be preparations for runway turns needed for quick takeoffs and landings by military aircraft, the Journal said.

Wang of Union Group denied allegations that the Dara Sakor project is connected with Beijing establishing a military presence.

"The project is purely for commercial and tourism. I can assure you that it's not at all built for any military purpose. It's an open place and we welcome those who want to visit the site for clarification," he said.

"Frankly, it is impossible for China to have such a military presence in Cambodia as it goes against the ASEAN principle and the country's Constitution," he told Kyodo News.

"It's not smart for Cambodia to allow China to do so; thus Cambodia can't make it happen," he added.

Local people have mixed opinions about the development, with some alleging that local authorities are trying to clear the land for the project.

Hour In, acting coordinator of local human rights origination Licadho based in the province, said more than 100 families have been affected by land issues in connection with the project.

"Some villagers lost their land where they have lived for many years, and some others are not properly compensated," he said.

Srun Darith, secretary of state at the Ministry of Environment who is dealing with the resettlement of villagers in the area, acknowledged that there have been more than 1,200 families affected since in 2008.

To date, about 1,000 families have been resettled, while others are demanding greater compensation for their land.

Union Group announced on its website that the area will be turned into a "brand-new comprehensive tourist resort in Southeast Asia" and the "largest travel-related destination on the eastern coast of the Gulf of Thailand."

It also touts Dara Sakor becoming a "marine economic industrial zone" and a "significant logistics transfer station in Southeast Asia" for both air and sea-borne traffic.