Living in Nagasaki, one of two Japanese cities destroyed by atomic bomb during the Second World War, 73-year-old Mitsuo Baba is still grateful to an American who dedicated himself to building homes for survivors.

"I met Schmoe-san only a couple of times as a kid and almost never talked with him, but all the residents, including myself, wanted to repay him for his kindness someday." 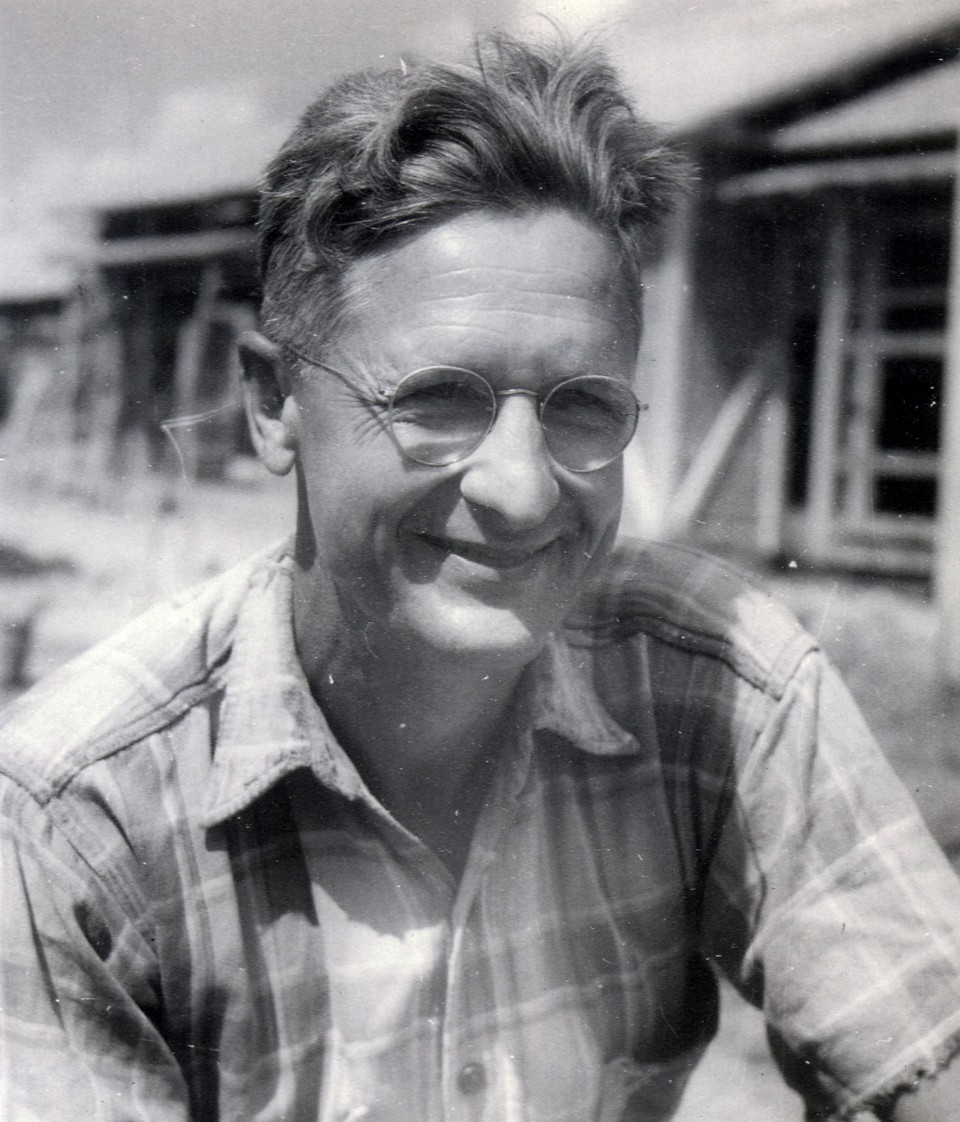 Floyd Schmoe, a Quaker, peace activist and professor of forestry who died in 2001 at the age of 105, led a project to construct homes for those left without them in wake of the U.S. atomic bombings of Hiroshima and Nagasaki.

Despite the passing of the years since Schmoe and his associates began to construct houses in 1949, former residents still clearly remember those days and ensure the memory of their efforts lives on.

Born in 1895 in Kansas, Schmoe was teaching at the University of Washington in Seattle when the Pacific War broke out in 1941.

As the war dragged on, with Japan's Nazi ally being defeated in Europe and the Pacific theater ongoing, the United States took the fateful decision to drop two atomic bombs on Japan. 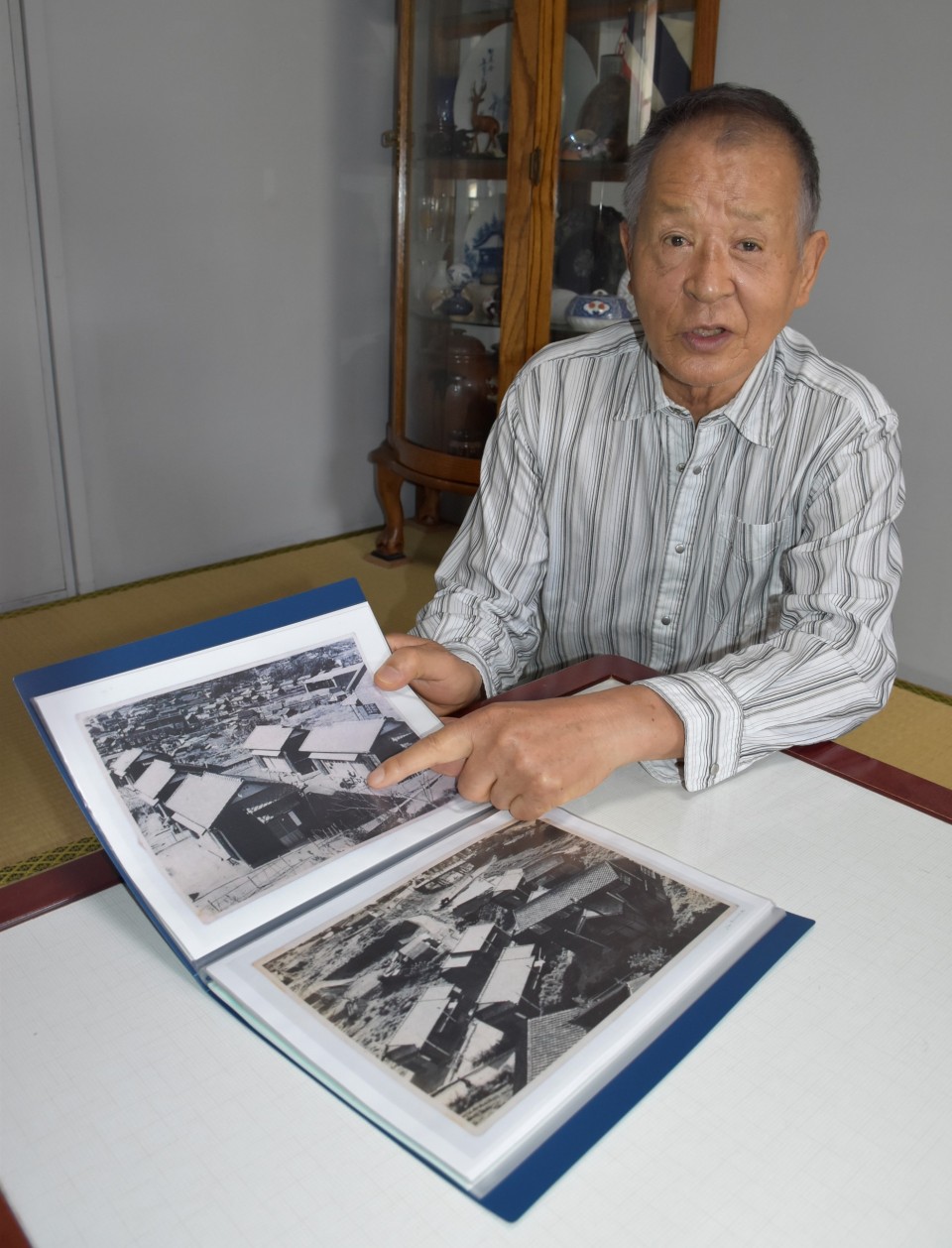 (Mitsuo Baba explains photos of his former house build under a project led by Floyd Schmoe in Nagasaki on Aug. 10, 2019.)

Distraught about the fate of those living in the two destroyed cities, Schmoe came up with the idea to build houses for residents, according to research conducted by the Hiroshima Peace Memorial Museum.

After returning to the United States following his first trip to Japan in 1948, Schmoe enlisted his colleagues' help. With donations of about $4,300 and building materials, he and three American partners arrived in Hiroshima in August 1949.

Within that month they had begun constructing four households together with six young volunteers from Tokyo and some locals, and had a ceremony to present them to the city in October.

The buildings were supposed to be named Schmoe House, but that was effectively rejected when Schmoe called them the Heiwa Jutaku, or Peace Houses, in his speech at the ceremony.

Referring to the people who had financially supported the project and individuals who committed themselves to the construction work, Schmoe said those houses expressed the goodwill of many Americans who had rued the use of atomic bombs.

Baba guesses Schmoe's low-key nature is probably a reason "he's not well-known, even in Nagasaki."

Although his helpers were different each year, Shmoe and his group traveled to Japan every late summer for five years through 1953, and set up at least 30 residences and community houses in the two cities.

Baba was born in the town of Kohoku in Saga, the neighboring prefecture to Nagasaki, about three months after the southwestern Japan city was bombed. He was exposed to fallout from the bomb while in his mother's womb, his father was killed in the attack and their family home in Nagasaki was destroyed. 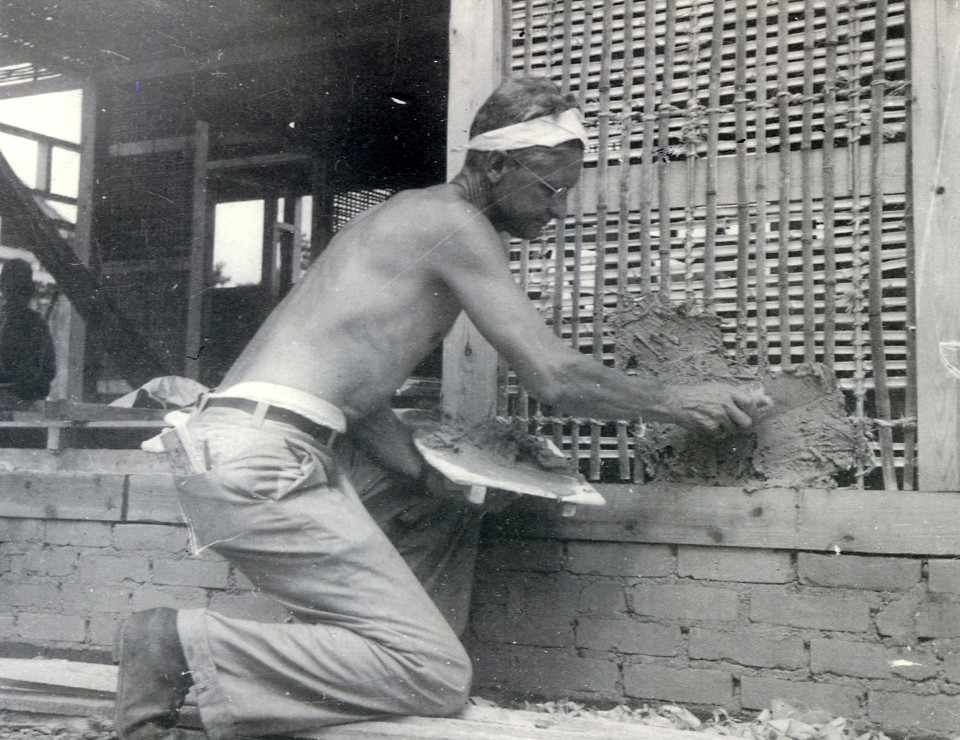 (Schmoe plastering a wall with mud in a construction work to build homes for 1945 U.S. atomic bombing survivors.)[Photo courtesy of the Hiroshima Peace Memorial Museum / Donated by Brooks Andrews]

He says it was in 1951 or 1952 that he moved into a new house built by Schmoe's group along with his mother and three elder brothers after they returned to Nagasaki when he was five.

"At first, what surprised me was that the house had its own private faucet in the kitchen instead of a shared one outside," said Baba, looking back to the day he saw it for the first time. "And of course, we were so happy about getting our own home."

None of the structures which were erected under Schmoe's Nagasaki project remains standing today.

Baba has lived in a municipal apartment since it was completed in 1977 at the site where houses built under the project were torn down. His building is named "Schmoe Apartment" and has a plaque thanking the American on its wall.

Residents of the demolished houses, including Baba's family, had demanded that the new building mark in some way Schmoe's gift to A-bomb survivors. Added Baba with a laugh, "Given his character detesting publicity, this building's name might go against his wishes."

In Hiroshima, where no less than 21 residences were constructed, the sole surviving building has served as an additional exhibition facility of the Hiroshima museum since 2012.

Dubbed "Schmoe House," the 55-square-meter former community center displays house designs, a miniature model and a hammer used in construction. It also introduces other Westerners who supported Hiroshima after the bombing.

The number of daily visitors there is almost always fewer than 10. Hiroko Nishimura, 61, representative of "the Group for Learning from Floyd Schmoe," sometimes regales visitors with detailed stories about the exhibitions. 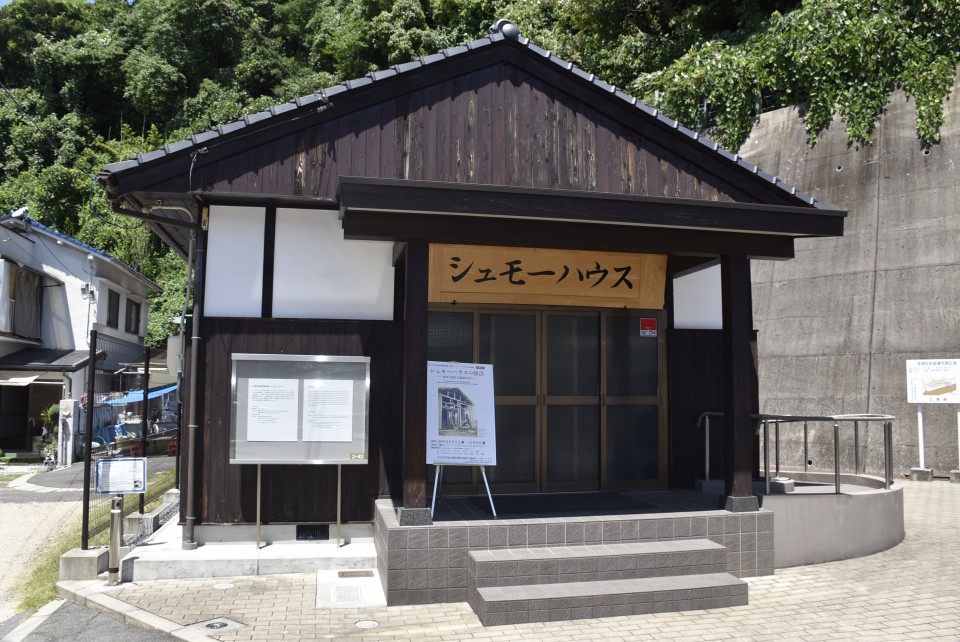 (Photo taken in Hiroshima on Aug. 7, 2019, shows "Schmoe House," the sole surviving building constructed under a project led by Floyd Schmoe, which now serves as an additional exhibiting facility of the Hiroshima Peace Memorial Museum.)

"Teaming up for one project can lead people with different backgrounds to a mutual understanding and peace. That's what he embodied, and his story gave me courage," said Nishimura, a Hiroshima native whose late father survived the atomic bombing.

She first heard about Schmoe in 2003, when she saw a news report that a statue of a Japanese atomic bomb victim was vandalized at the Seattle Peace Park built by Schmoe in his home country.

Since setting up the group in 2004, its six members, all of whom are volunteer guides in Hiroshima, have been undertaking research, including conducting interviews and collecting photos. 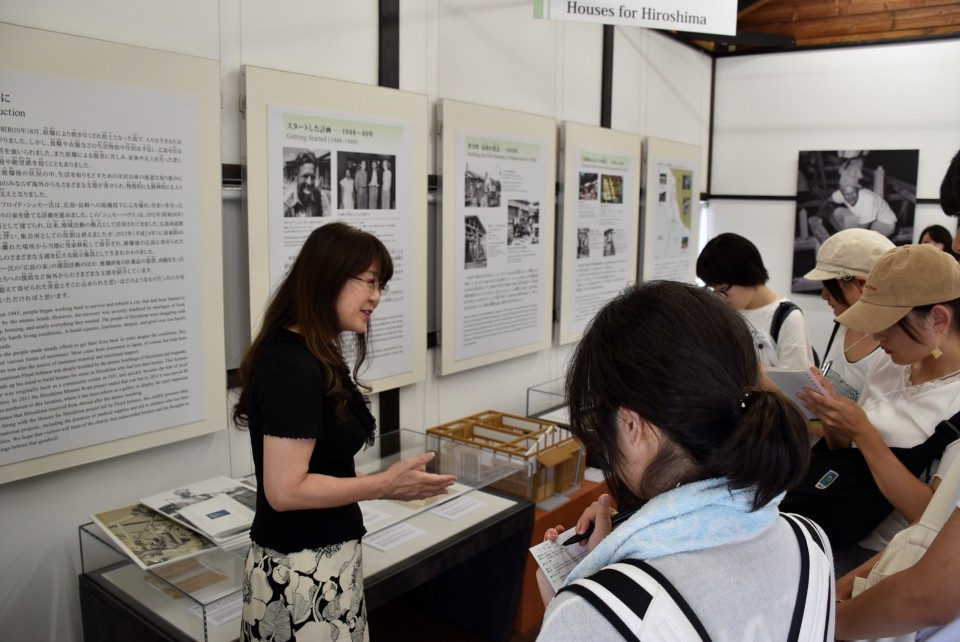 (Hiroko Nishimura, left, representative of "the Group for Learning from Floyd Schmoe," explains the exhibitions on Floyd Schmoe to visitors inside "Schmoe House" in Hiroshima on Aug. 7, 2019.)

They also compiled two booklets based on information they gathered, and have made picture story cards and illustrated books for children.

Nishimura and Baba met due to the former's door-to-door fieldwork in search of former residents of Schmoe's houses.

"That means the action which Schmoe-san took 70 years ago has been bringing us together, even today. I can't stop (being engaged in the research activities) because it's so enjoyable," said Nishimura. 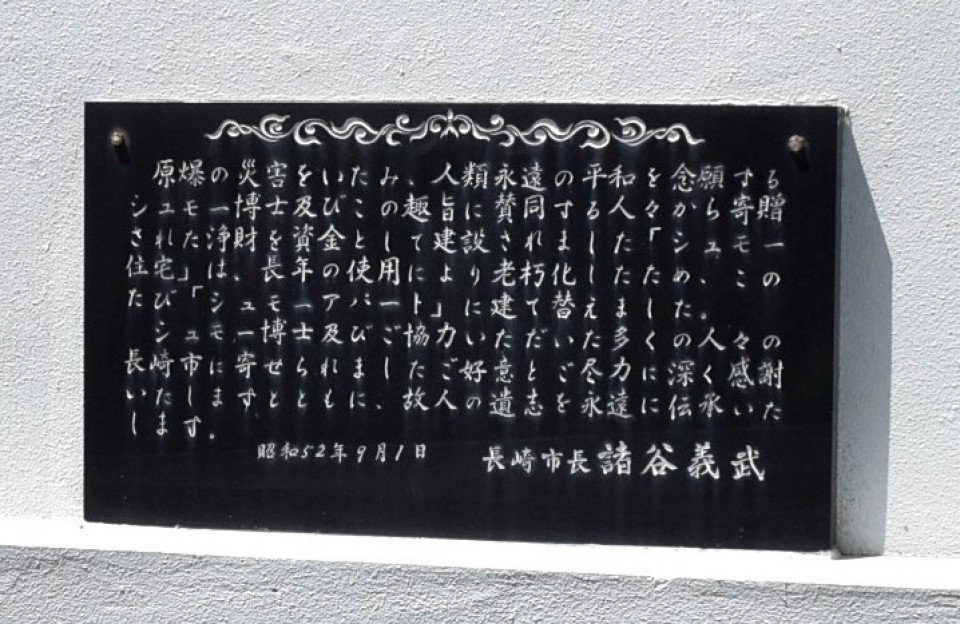 (Photo taken in Nagasaki on Aug. 10, 2019, shows a plaque on the wall of "Schmoe Apart," which gives words of gratitude to Floyd Schmoe.)

Ryo Koyama, a curator of the Hiroshima Peace Memorial Museum, says the efforts of local citizens and the exhibitions at Schmoe House have sparked renewed public interest in Schmoe in recent years.

"Visitors are still very few, but here you can deepen your understanding of how Schmoe-san and other foreign people have contributed to Hiroshima's revival from the bombing," said Koyama, adding, "By all means, we want many people to come here."