South Korea's prime minister on Wednesday urged Japan to agree to talks to repair strained ties between the two countries, after Japan revoked South Korea's status as a preferential trading partner earlier in the day.

Lee Nak Yeon, speaking at a meeting with other government ministers in the morning, said the South Korean government will at the same time proceed "without delay" to lodge a complaint with the World Trade Organization to remedy Japan's "unfair economic retaliation."

Lee's remarks came hours after the Japanese government took South Korea off a list of countries that enjoy minimum trade restrictions on goods such as electronic components that can be diverted for military use.

The move, coming after Tokyo last month implemented tighter controls on exports of some materials needed by South Korean manufacturers of semiconductors and display panels, is certain to add fuel to the spat between the neighboring countries.

The ministry said later in the day that Kim Jung Han, its director general for Asian and Pacific affairs, will meet with Kenji Kanasugi, the Japanese Foreign Ministry's head of Asian and Oceanian affairs, in Seoul on Thursday afternoon. 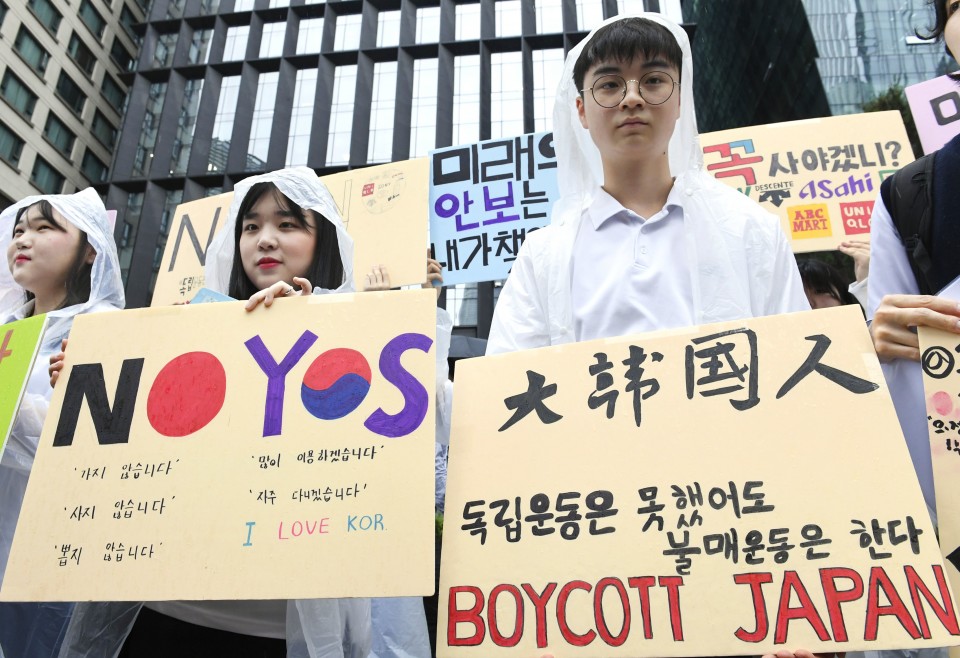 Kanasugi and Kim held similar talks on the outskirts of Beijing on Aug. 20. At the time, the South Korean government said the two agreed to continue dialogue.

The Japanese diplomat is also scheduled to meet Thursday with Lee Do Hoon, South Korea's special representative for Korean Peninsula peace and security affairs, according to the South Korean Foreign Ministry.

Japan has cited national security concerns for imposing the tougher export rules, which were announced in early July. But the measures are widely seen as retaliation for top South Korean court rulings last year that ordered some Japanese companies to compensate Koreans over wartime forced labor.

At Wednesday's meeting, Lee Nak Yeon emphasized the need to hold talks between South Korea and Japan to prevent the situation from worsening, while pledging to prepare measures to strengthen the competitiveness of domestically produced parts and components.

To advance the latter measures, the South Korean government and the ruling Democratic Party of Korea decided at a meeting earlier Wednesday to allocate over 5 trillion won (about $4.12 billion) in a budget over three years from next year.

The measures are aimed at stopping the South Korean industry's reliance on Japanese materials and components.

Also Wednesday, the Foreign Ministry demanded that Japan roll back its export controls on South Korea, with a spokesman saying in a statement that Tokyo's refusal to engage in talks with Seoul over the controls would not help solve the bilateral row.

As ties between the two neighbors sank to their lowest point in decades, the South Korean presidential office said last week that the country is terminating a military intelligence-sharing pact with Japan that helps the U.S. allies counter missile threats from North Korea.

Kim said that terminating the 2016 pact with Japan will in fact enable the government to "elevate" an existing military alliance between South Korea and the United States "a further notch."

Lee, the South Korean prime minister, said Monday the decision to pull out of the GSOMIA could be reconsidered if Japan cancels its trade measures by the time the accord ends in late November.