Rugby World Cup in Japan not expected to be smoke-free

Match spectators will be allowed to smoke in designated spaces inside and outside stadiums during the Rugby World Cup starting next month in Japan, in stark contrast with the 2020 Tokyo Olympics and Paralympics whose venues will be completely smoke-free. 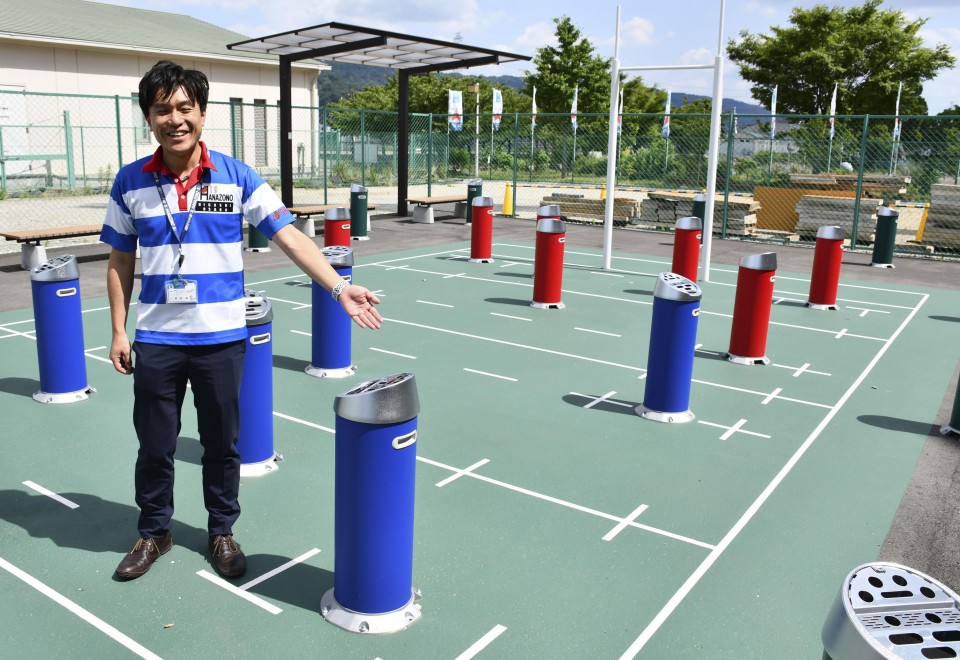 (Outside smoking space at the Hanazono Rugby Stadium.)

The Hanazono Rugby Stadium in Higashiosaka, Osaka Prefecture, one of the 12 venues, has undergone a major revamp for the event and a 220-square-meter outside smoking area was newly built.

The space resembles a rugby field, complete with two goal posts and ashtray stands placed around the pitch. The stadium also has other smoking areas.

"We set up the spaces to prevent nonsmokers from inhaling secondhand smoke," said an official of the host city. "Smoking areas are needed because we don't want people creating litter with cigarette butts."

The World Cup organizing committee has decided to ban indoor smoking at the 12 venues in principle, but will nevertheless create special rooms for smokers within the stadium buildings.

The decision was based on Japan's revised Health Promotion Law aimed at preventing secondhand smoking, which was enacted last year and will take effect next April. The legislation has drawn fire from experts for having many loopholes.

"It is our role to provide a comfortable viewing environment for the audience coming from around the world," said an official of the World Cup organizing committee. "We'd like to prepare measures for separating smoking and nonsmoking areas while giving consideration to nonsmokers."

In contrast, organizers of the Tokyo Olympics and Paralympics in 2020 said in February that smoking will not be permitted at any venue during the games, including heated tobacco products and other vaping devices.

The decision is in line with the International Olympic Committee's tobacco-free Olympics tradition since 1988, and existing smoking areas are expected to be closed during the event.

"I think it is desirable to shift policy toward not installing smoking areas even at this stage, but if they do set them up, their presence should be minimized to areas where not many people pass by," Sugimoto said.