Hundreds of flights to and from Hong Kong were canceled Tuesday even though its airport resumed operations in the morning following anti-government protests there that prompted massive flight cancellations the previous day.

Over 400 flights have been canceled Tuesday, according to the airport website, including those to and from Japan's major airports -- Narita, Haneda and Kansai. 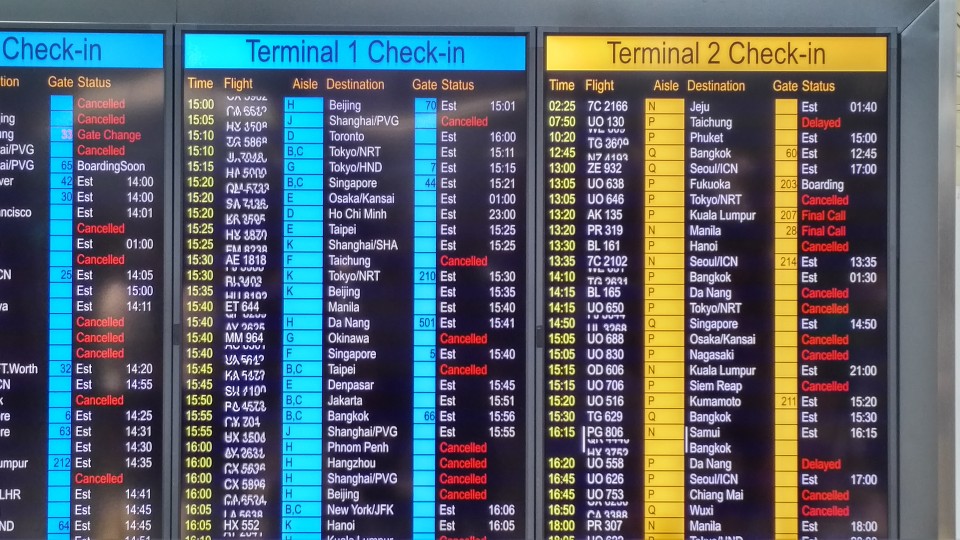 Police arrived at the airport late Tuesday night to help an ambulance removal of a man, believed to be a policeman from mainland China, hours after he was allegedly caught taking photographs of protesters, local media reported.

As police retreated, protesters threw debris at them and blocked the road with luggage carts and metal barricades.

Riot police chased after some protesters and used pepper spray on them near the airport entrance, and in one confrontation an officer pointed a pistol at some in the crowd. At least two men were seen taken away by police. 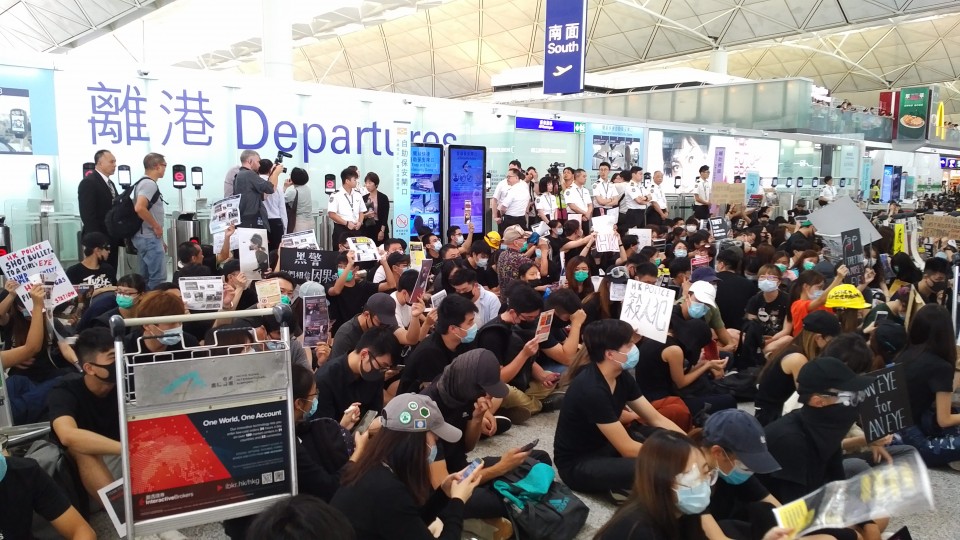 With the disruptions from prolonged protests threatening to impact Hong Kong's status as an international business hub and a tourist destination, Hong Kong leader Carrie Lam called on the protesters to stop damaging the rule of law in the name of freedom and justice, saying that the city is being pushed to the point of no return.

"I ask you all to drop your differences, calm down and spend a minute to think. Do we want to see our home pushed towards a deep abyss and broken into pieces?" the chief executive told reporters.

"The only task before us now is to resist violence, maintain the rule of law and restore social order. Only when chaos calms down can we have sincere conversations."

Thousands of protesters, angry with the government's refusal to fully withdraw a now-suspended extradition bill and police violence during protests, swarmed the airport on Monday.

An extended sit-in taking place inside the airport's lobby forced the airport authority to suspend check-in procedures and prompted cancellations of nearly all flights from late Monday afternoon. 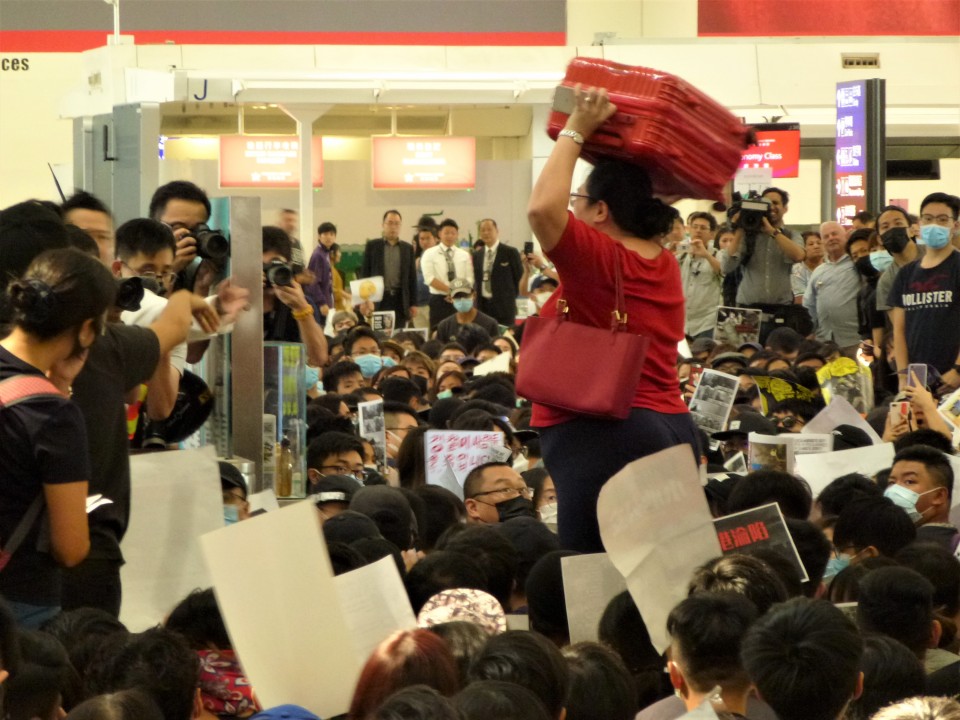 Monday's airport disruptions followed a three-day, peaceful sit-in at the airport's arrivals hall from Friday to protest against the controversial bill which would allow the transfer of fugitives to jurisdictions with which Hong Kong has no extradition arrangements, including mainland China.

The Chinese government has condemned violent demonstrations in the semiautonomous territory over the weekend -- including an incident in which a petrol bomb thrown by a protester allegedly left a police officer with burn injuries -- saying the series of protests have begun showing "signs of terrorism."

"Radical protesters have resorted to using dangerous tools to attack police, which are serious violent crimes and early signs of terrorism," Yang Guang, spokesman of the Hong Kong and Macau Affairs Office of the State Council said at a press conference in Beijing on Monday. "Stopping violence and chaos and restoring order are now Hong Kong's highest priorities." 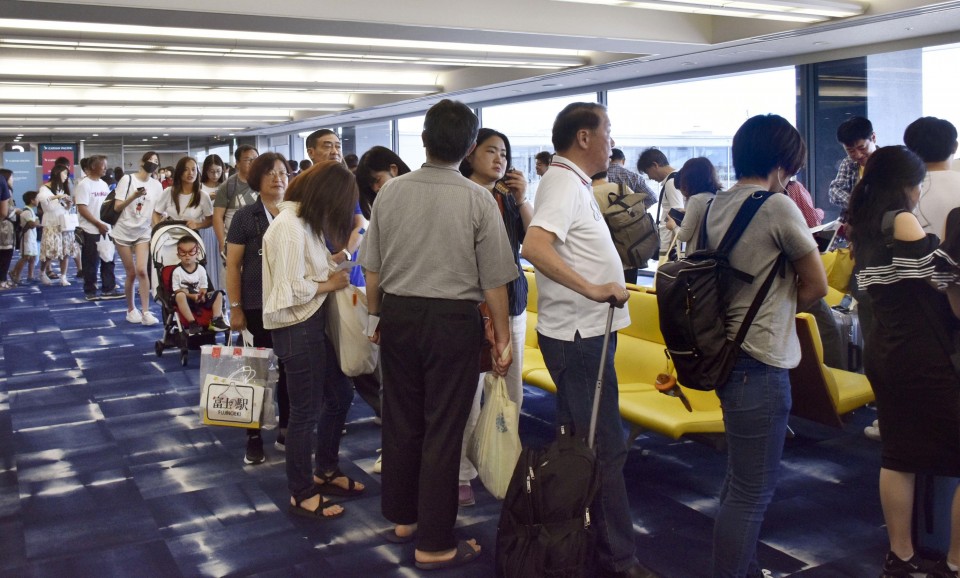 (Passengers queue up at the boarding gate for a flight to Hong Kong at Kansai airport in western Japan, on Aug. 13)

At the airport on Tuesday, protesters said some of the travelers they encountered were understanding of their actions there.

"Obstructing the airport will cause a negative impact, but the tourists we met whose travel plans were disrupted had been understanding after we explained Hong Kong's dire situation," said high school student King Fok, 16, who was protesting at the airport for the second consecutive day. "For the future of Hong Kong, we have to try everything."

He added that he hopes Lam "can find her conscience and stop killing Hong Kong."

A South Korean tourist, who spent four days in Hong Kong and was leaving on a delayed flight on Tuesday, said he felt sympathy for the young protesters.

"I support them, their fight for freedom and democracy," Yoon Suk Geon, a 32-year-old civil servant, said. 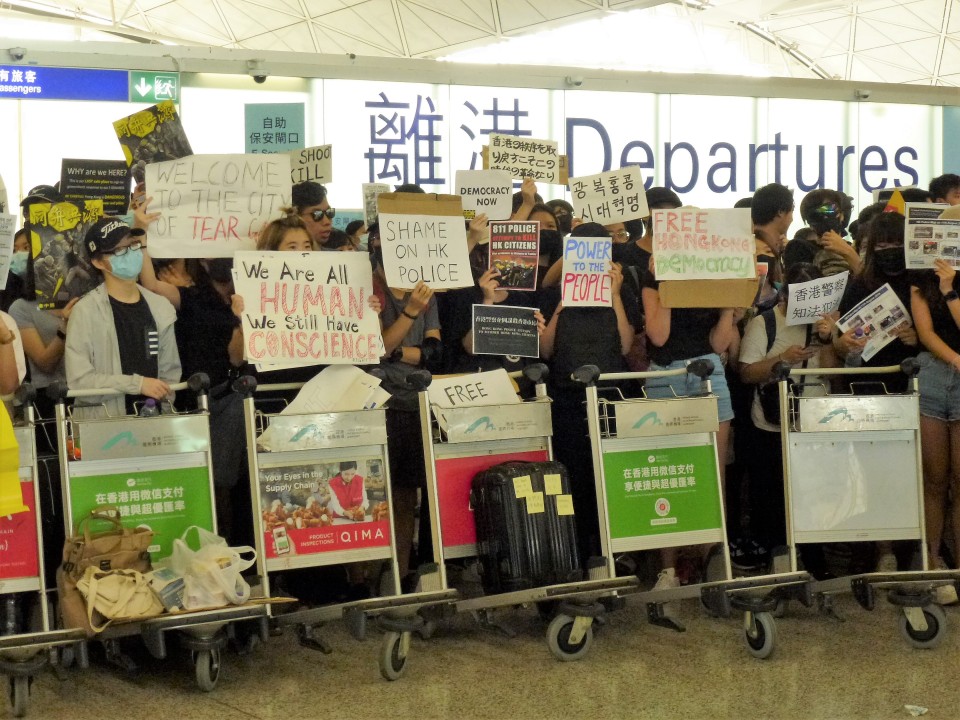 But not everyone agrees with the protesters' tactics.

A Taiwanese teacher surnamed Nan, who was flying out Tuesday night, said that in protesting against the government, it is important not to cause problems for other people.

"When you affect travelers, you lose their support," he said.

Millions of people have taken to the streets since June in protest against the extradition bill.

Facing widespread popular opposition, Lam moved to suspend the bill's legislative process and later declared it "dead" in a bid to quell public anger. However, the protests have continued to draw large crowds.

Some of the protests have turned violent and resulted in clashes between police and protesters, with officers resorting to tear gas, rubber bullets and other projectiles, and crowds countering by throwing bricks, bamboo sticks and gasoline bombs.

So far, about 700 people have been arrested for offenses including rioting, unlawful assembly, assaulting police, possessing weapons and obstructing police duty, according to the police. 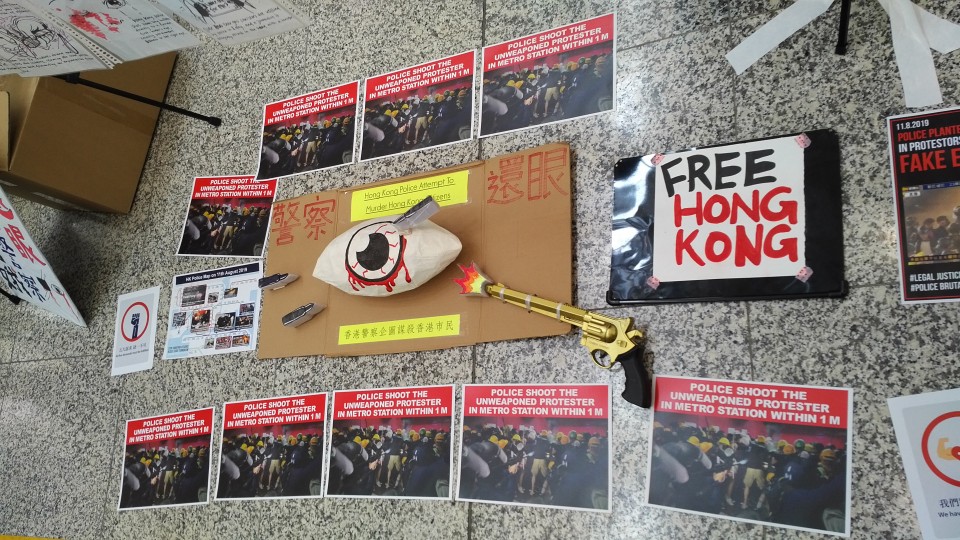 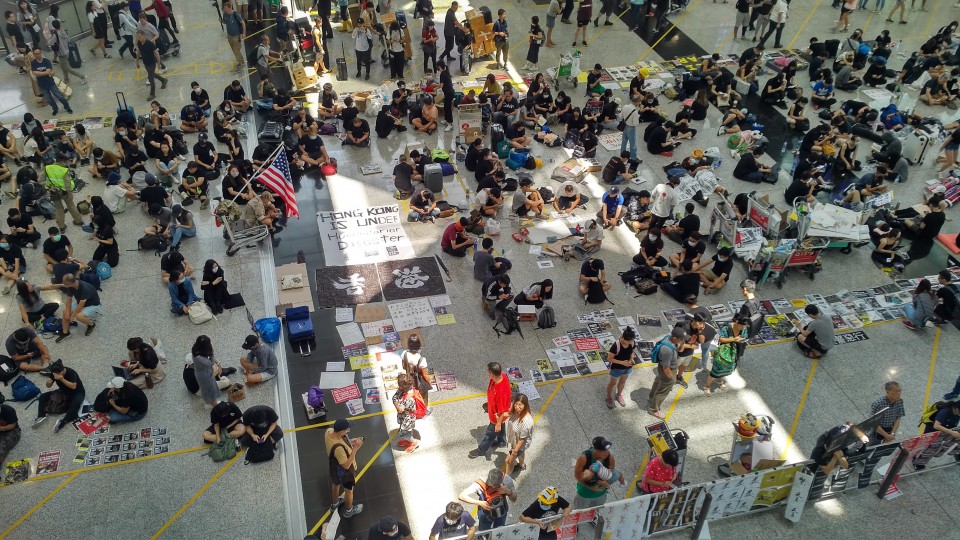