Chinese Foreign Minister Wang Yi on Wednesday asked Japan and South Korea to seek a solution to resolve their differences "through dialogue," amid concern that worsening relations between Tokyo and Seoul may threaten regional economic stability down the road.

"While maintaining a constructive attitude, it is important (for Japan and South Korea) to find out an appropriate solution through dialogue," Wang said at the outset of a foreign ministerial gathering of the three nations on the outskirts of Beijing.

Kono said, "Two countries sometimes face various difficulties respectively, but even under such circumstances, Japan, China and South Korea should work together trilaterally."

A Japanese government official briefing reporters later in the day quoted Kono as telling Wang and Kang that the foreign ministers "should refrain" from raising issues related to bilateral relations during the trilateral meeting. 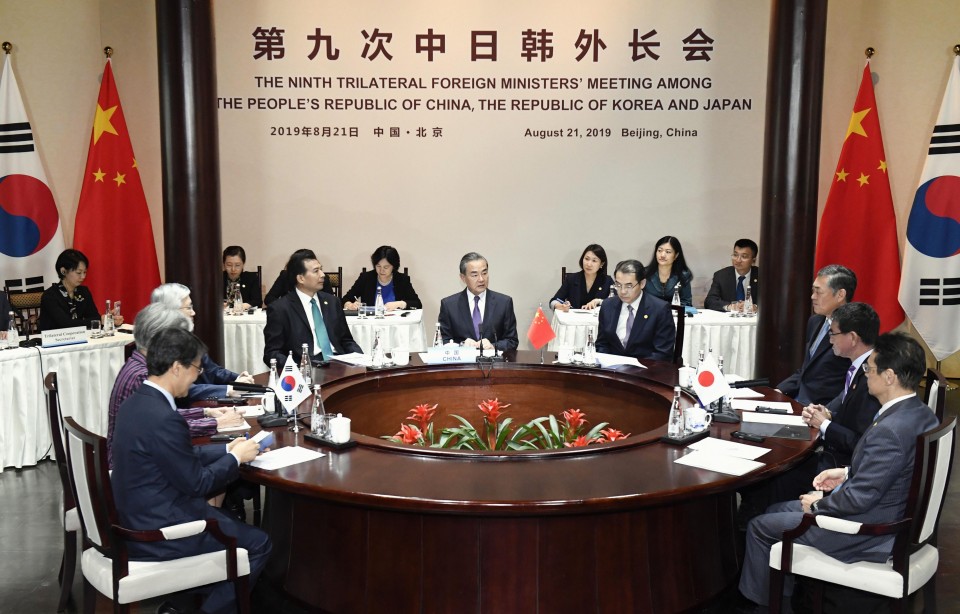 Kang, however, told Kono and Wang that South Korea hopes that the three nations will stick to "free and fair" trade for prosperity in the region in an apparent jab at Japan, underscoring that strains between Tokyo and Seoul are unlikely to wane soon.

She also said at a joint press appearance following the talks, "It is important to eliminate unilateral and arbitrary trade retaliatory steps and remove uncertainties" in East Asia. Kang did not single out Japan.

The Japanese official said Wang did not make comments aimed at mediating in the row between Tokyo and Seoul.

Recently, Japan-South Korea ties have arguably plunged to the lowest point since normalization in 1965 over Japanese imposition of export control measures in the wake of a string of South Korean court rulings last year ordering compensation for wartime labor.

At a three-way meeting in Bangkok earlier this month, U.S. Secretary of State Mike Pompeo urged his Japanese and South Korean counterparts to make efforts to ease their confrontation, but no resolution has been in sight.

China has voiced eagerness to expand trade cooperation with its neighbors, as the world's second-biggest economy has been slowing down due largely to an intensifying trade war with the United States.

At their meeting, meanwhile, the foreign ministers from the three East Asian nations failed to set a date for an annual summit of their leaders, slated for later this year in China. 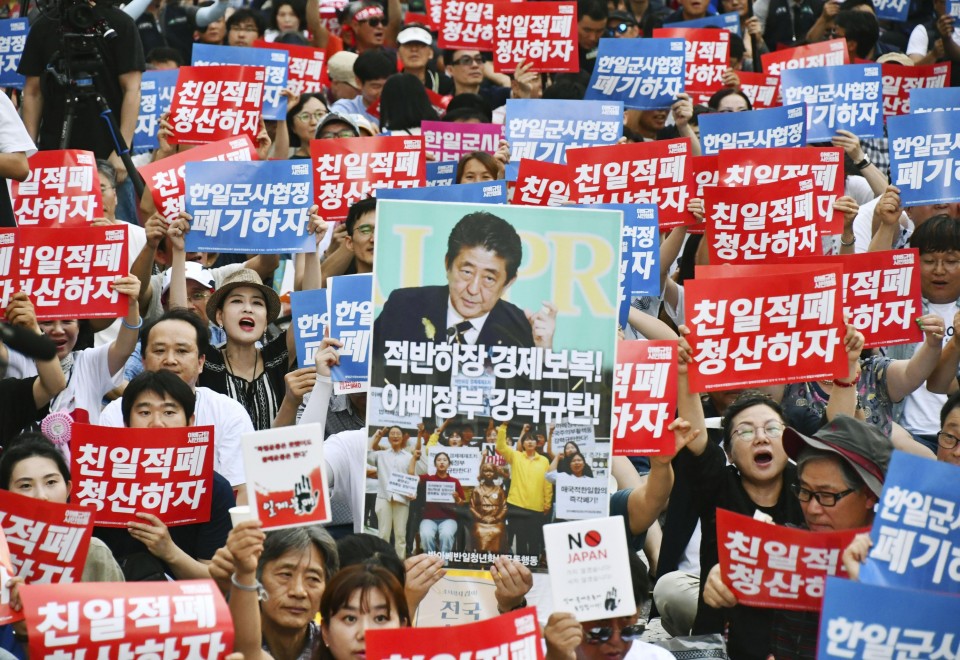 The summit, held on a rotating basis by Tokyo, Beijing and Seoul, has occasionally been suspended against the backdrop of a chill in Japan's relations with its two neighbors over history and territorial disputes as well as political turmoil in South Korea.

Japanese Prime Minister Shinzo Abe and South Korean President Moon Jae In have shown little sign of making concessions in the escalating economic and political row between their two countries.

In 2018, South Korea's top court ruled that Japanese companies must compensate people claiming to be victims of forced labor during Japan's colonial rule of Korea.

Abe's government has argued that the decisions are against a 1965 bilateral agreement that settled the compensation issue "finally and completely," criticizing Moon's administration for violating an international treaty.

Japan has strengthened export controls on South Korea since last month, citing security anxiety. Seoul has insisted that the measures are designed to take reprisals against the court rulings, triggering a tit-for-tat trade dispute between the two countries.

Kono, Wang and Kang met at a resort in the Chinese capital also at a time when North Korea's consecutive test-firings of new weapons have added to uncertainties in the regional security situation. 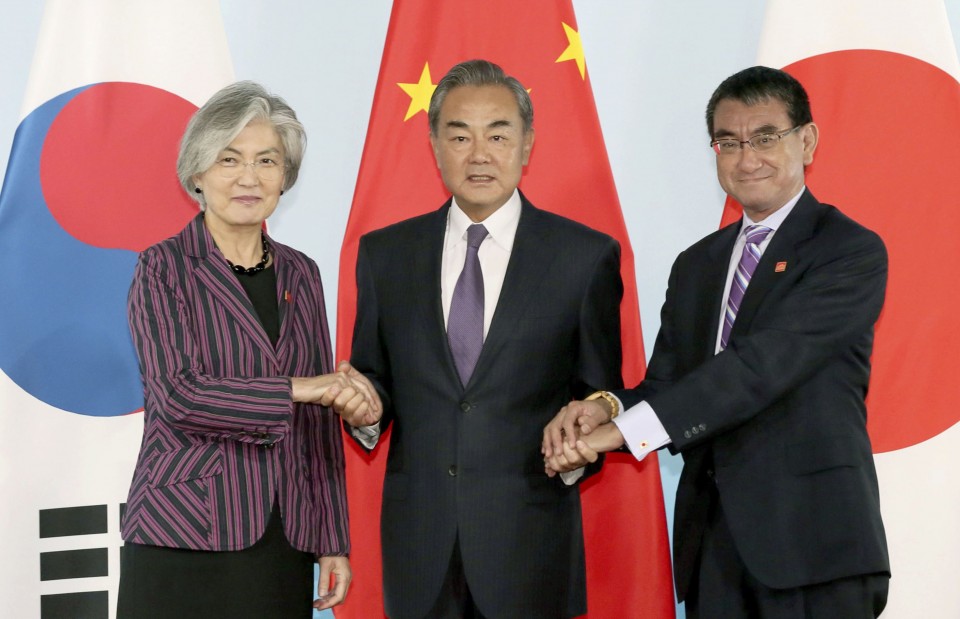 The foreign ministers confirmed that the three nations will work in tandem to achieve denuclearization of North Korea.

North Korea has repeatedly launched projectiles, including what Tokyo and Seoul have suspected to be short-range ballistic missiles, off its east coast since July 25, in protest of a South Korea-U.S. joint military drill that took place from Aug. 5 through Tuesday.

As China and South Korea have expressed willingness to deepen economic relations with the North, Kono called on Beijing and Seoul to fully implement U.N. sanctions resolutions against Pyongyang.

Among other issues raised at the foreign ministerial gathering were how to boost trilateral people-to-people exchanges on the occasion of the 2020 Tokyo Summer Olympics and the 2022 Beijing Winter Games. In 2018, South Korea hosted the Pyeongchang Winter Olympics.

Japanese, Chinese and South Korean foreign ministers got together for the first time since they did so in Tokyo in August 2016. The last trilateral summit was held in Tokyo in May 2018, which was the first in two and a half years.

The following is the gist of talks among the foreign ministers of Japan, China and South Korea, held at a resort area in Beijing on Wednesday.

-- calls on China and South Korea to bolster trilateral cooperation even when respective bilateral ties sour.

-- asks Japan and South Korea to seek solution to resolve differences "through dialogue."

-- expresses hope that Japan, China and South Korea will stick to "free and fair" trade for prosperity in region.

-- continue to work together to hold trilateral summit by year-end.