Having overcome numerous challenges since suffering life-altering injuries in a deadly train derailment accident in western Japan in 2005, Aiko Okazaki doesn't plan to go easy on herself when it comes to her latest test -- competing in archery in the 2020 Tokyo Paralympic Games.

The 33-year-old Okazaki only took up the sport in 2013 but was selected to compete in the Paralympics next year after winning a bronze medal in the mixed team event at the world championships in the Netherlands in June.

"Since I decided to do this, I have to aim for the top," said Okazaki, who is paralyzed in her upper and lower body as a result of the spinal cord damage she suffered in the derailment accident in Amagasaki, Hyogo Prefecture, which left 107 people dead and injured a further 562.

After the accident on the JR Fukuchiyama Line on April 25, 2005, Okazaki underwent rehabilitation until the following May, 377 days after the accident -- the longest period of hospitalization for any of the survivors. She was left needing a wheelchair to get around and assistance with daily chores.

Undaunted by her adversities, however, after leaving hospital she returned to Doshisha University in Kyoto, the school she had been attending and which she had been traveling to when the accident occurred. 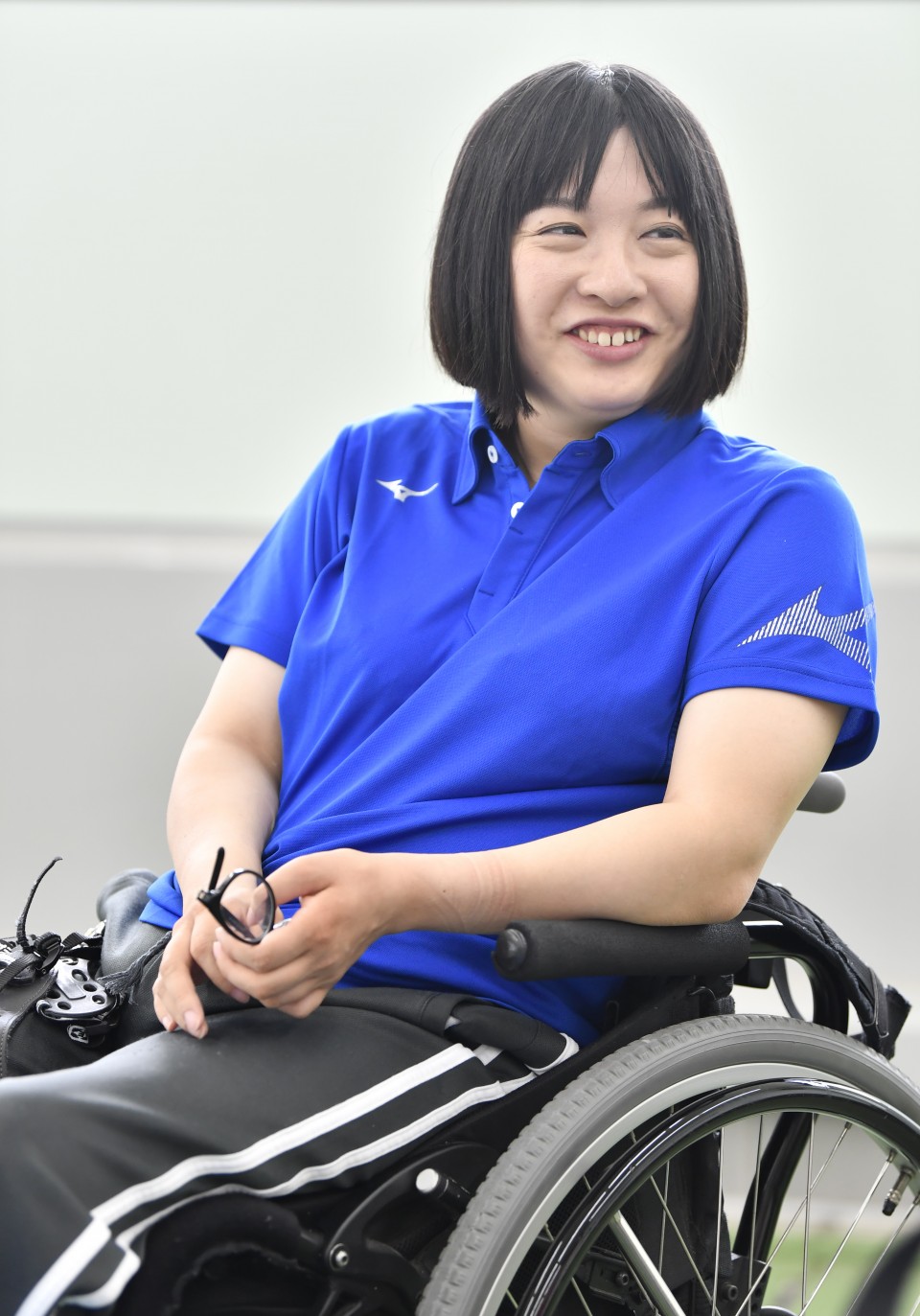 She rented an apartment by herself in Kyoto, and, before graduating, went job hunting like her friends did, commuting back and forth between Kyoto and Tokyo.

"I never wanted to give up what I wanted to do just because of my impairment," said Okazaki, who is in the "W1" class for para athletes who have limited function in both lower and upper limbs and compete from a wheelchair.

After graduation, Okazaki landed a job in Tokyo at electronics company Sony Corp. in 2008 and worked there for nearly six years. In 2015, she published a book depicting her struggles living with her injuries.

In the book, she describes how, after being on the verge of death, she overcame her painful experiences and developed a positive attitude toward life with the support of family, friends and hospital staff.

She also talks about the passion she had for physical exercise and competitive sport before the accident, when she regularly toured Japan to compete in dog frisbee competitions.

The experiences she has gone through as a result of the accident, while not good, have given Okazaki a new perspective on things she would have never noticed if she had not been there on that fateful day, she says. But the memory of the derailment itself now has little influence on her.

"The accident is one event that happened in the past," she said.

The big challenge for Okazaki when she started practicing archery -- a sport her mother took part in as a university student -- was overcoming her doubts about being able to compete at all, since she lacks the use of her hands.

As she had feared, she initially was not even able to draw a bow. "I thought I wasn't fit for the sport," she said.

Rather than abandoning it, however, she started a process of trial and error to find out how to make it work for her.

She changed her bow and the height of the backrest and cushion in her wheelchair so she wouldn't slide. One of the most difficult adjustments was her release aid, a device which helps an archer to draw a bow with minimal grip strength. The compound bow uses a levering system and enables her to draw it with less strength than is required by a recurve bow.

Securing practice time was also challenging. Needing assistance to notch an arrow, at first she relied on her mother to accompany her to the archery hall, but her mother was only able to come to Tokyo from Osaka once every several months.

But since Okazaki started dating Yuta Hori, 39, things have changed dramatically, with Hori now accompanying her to practice around two to three times a week and assisting her in competitions.

"At first, she was shooting for a 12-meter target, but now she can hit through the center of a 50-meter target. I feel happy when she hits the center of the target," said Hori, who himself has had to deal with a physical handicap since having one of his legs amputated due to cancer. 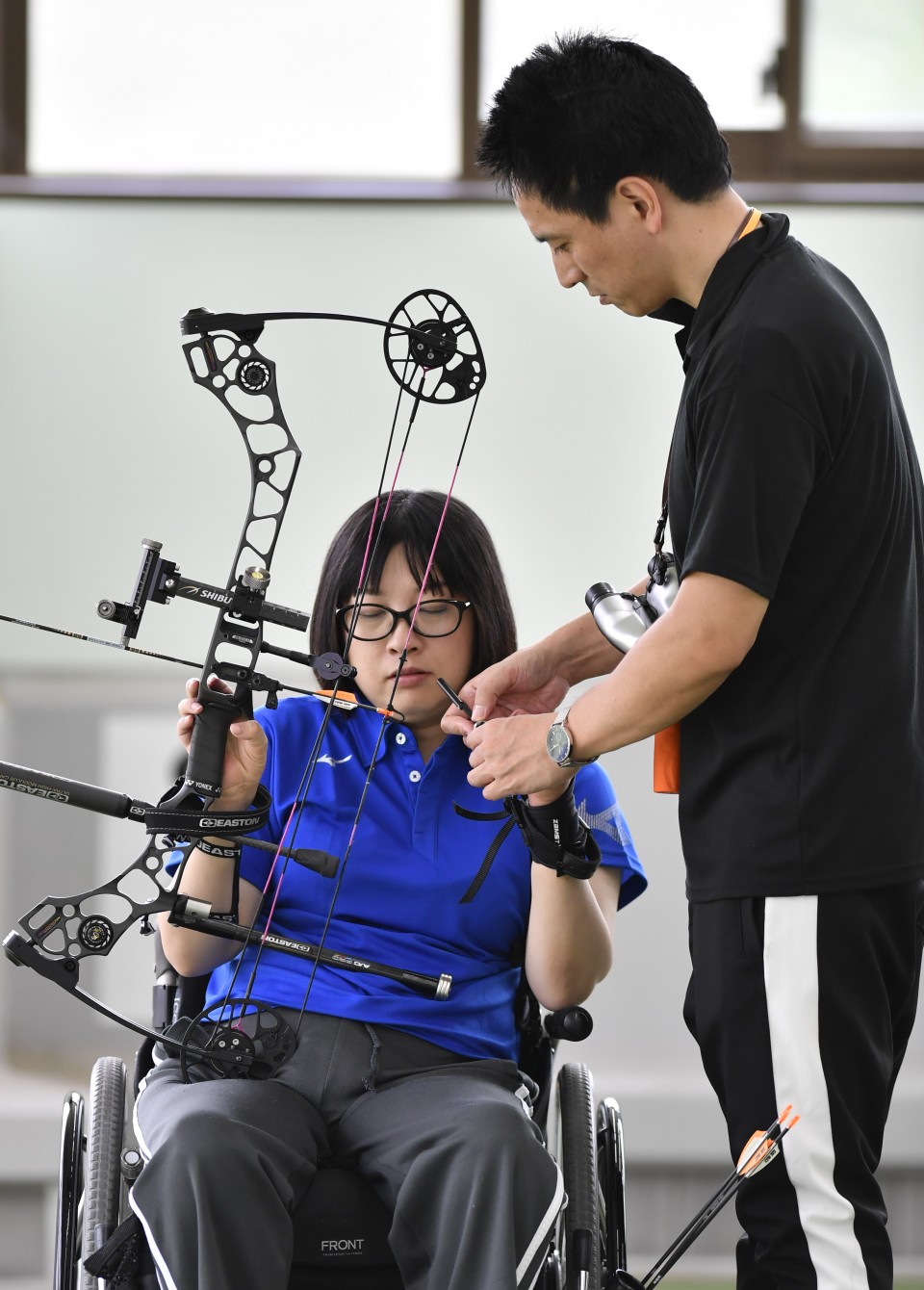 (Aiko Okazaki notches an arrow with the help of her partner Yuta Hori at an archery hall in Tokyo.)

At competitions, Hori helps Okazaki notch arrows and tells her where the arrows hit using a pair of binoculars. Although he tries to remain calm, he admits he sometimes gets carried away with excitement when she manages to hit the bull's eye.

Since Okazaki has limited use of the muscles in her abdomen and back, she needs to employ her arm and shoulder strength to support the nearly 3-kilogram bow used for competitions. So in addition to archery range practice, Okazaki goes to a gym once a week for strength training.

As archery competitions are held outside, Okazaki makes sure she is ready for any weather conditions, making a point of practicing even on rainy or windy days.

"At competitions, I shoot each arrow carefully," Okazaki said. "If I keep up these efforts, it would lead to favorable results."