Bolton says U.S. will not mediate in row between Japan, S. Korea

U.S. National Security Adviser John Bolton has told Japanese Foreign Minister Taro Kono that Washington does not intend to mediate in a dispute between Tokyo and Seoul over wartime labor and trade policy, a Japanese government source said Wednesday.

Bolton explained Washington's hands-off approach to the row between its two Asian security allies in a meeting with Kono on Monday, the source said. 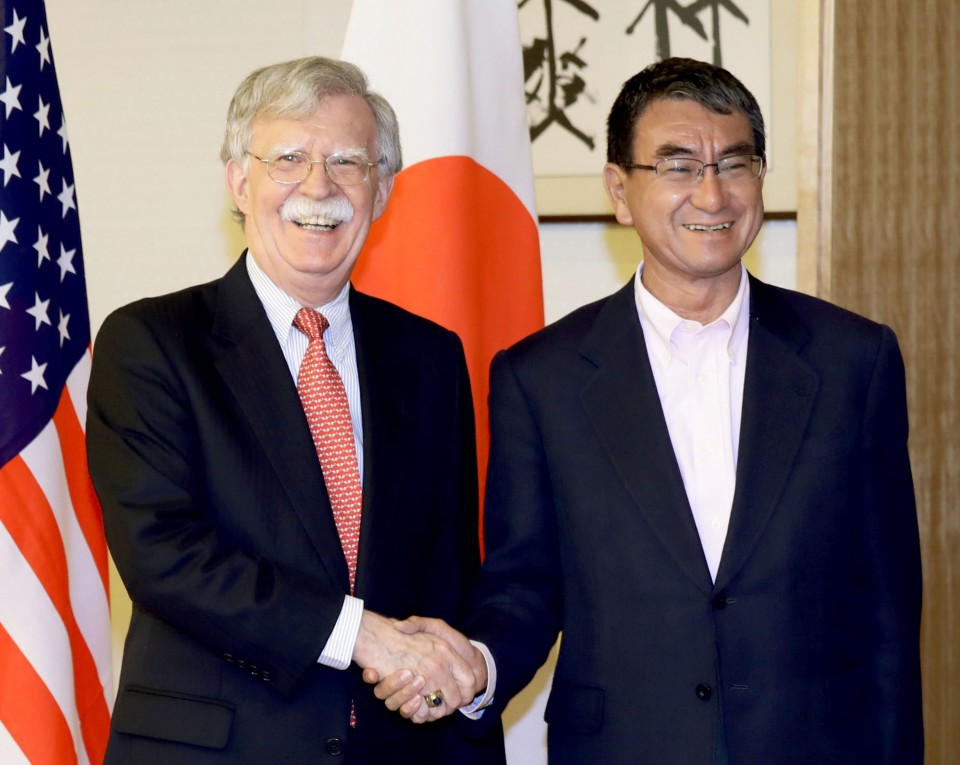 Relations between the neighboring countries, long fraught over differing views of wartime history, have become particularly tense since South Korean court decisions ordering Japanese companies to compensate people who claimed they were victims of forced labor during Japan's 1910-1945 colonial rule of the peninsula.

Japan earlier this month imposed new restrictions on South Korea-bound exports of three materials used to manufacture semiconductors and display panels for smartphones and TVs, a move Seoul has criticized as retaliation. Tokyo insists the measures are meant to address security concerns.

According to the source, Kono told Bolton that South Korea was to blame for the deteriorating ties as it had failed to honor a 1965 bilateral agreement that Japan views as having settled the compensation issue "finally and completely."

Bolton expressed concern that the disagreement could cause a crack in their three-way security alliance amid efforts to denuclearize North Korea, and asked for Tokyo and Seoul to settle their differences themselves, the source said.

U.S. President Donald Trump had said he would be willing to mediate if asked. "It's like a full-time job getting involved between Japan and South Korea...If they need me, I'm there," he told reporters on Friday.

Meanwhile, the dispute over Japan's export restrictions has continued to heat up.

In addition to the three materials -- fluorinated polyimide, hydrogen fluoride and photoresist -- Japan also plans next month to take South Korea off of a "white list" of countries that can purchase goods with potential military applications.

The measures would "shake the foundations" of economic cooperation between the countries and security cooperation in Northeast Asia, he said.

Japan's industry ministry accepted public comments from July 1 to Wednesday on the planned exclusion of South Korea from the white list and received over 10,000 comments, its officials said. Most of the opinions were supportive of the removal, they said.

The ministry received an opinion from the South Korean government itself, the officials said without elaborating on its contents.

Japanese industry minister Hiroshige Seko defended Tokyo's reasons as legitimate and bashed Seoul for having not participated in policy discussions earlier in the year despite repeated calls to do so.