Japan celebrated one year to go until the 2020 Olympic Games on Wednesday, with International Olympic Committee chief Thomas Bach saying Tokyo will write a page in the history books when the largest international multi-sports event opens next summer.

"One year from now Japan will make history," Bach said at a ceremony in Tokyo. "When the Olympic Games Tokyo 2020 get under way, the eyes of the world will be on Japan."

Bach was joined by Japanese Prime Minister Shinzo Abe and Tokyo Gov. Yuriko Koike at the event in Tokyo, which featured live musical performances and the unveiling of the design of the Olympic medals.

The IOC chief said the host nation is making record progress as it prepares to host more than 10,000 athletes who will compete at venues located in Tokyo and nine prefectures in Japan.

"The preparations are making excellent progress," Bach said. "I can truly say I have never seen an Olympic city as prepared as Tokyo with one year to go before the Olympic Games." 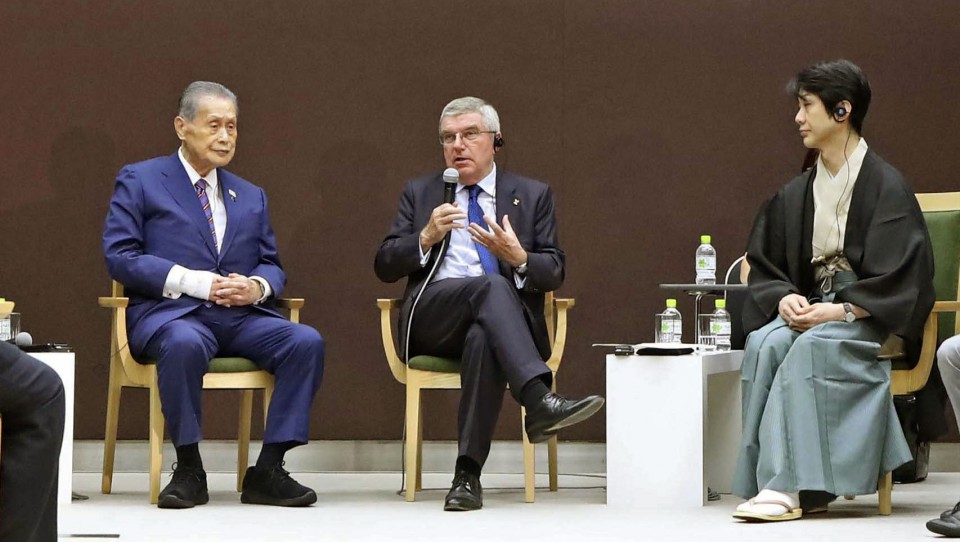 (International Olympic Committee President Thomas Bach meets in Tokyo on July 24, 2019, with Kyogen actor Nomura Mansai, right, who will orchestrate the opening and closing ceremonies of the 2020 Tokyo Olympics and Paralympics. Seated next to Bach is Yoshiro Mori, former Japanese prime minister and head of the 2020 Tokyo Olympics and Paralympics organizing committee.)

"I vowed to do our absolute best toward the success of the 2020 Games when we won the bid to host the games six years ago in Buenos Aires," Abe said.

"Sports have the power to connect the world and give everybody equal opportunities -- this is what we learned from the games 55 years ago. With the games approaching, I am looking forward to seeing athletes gunning to overcome their limits." 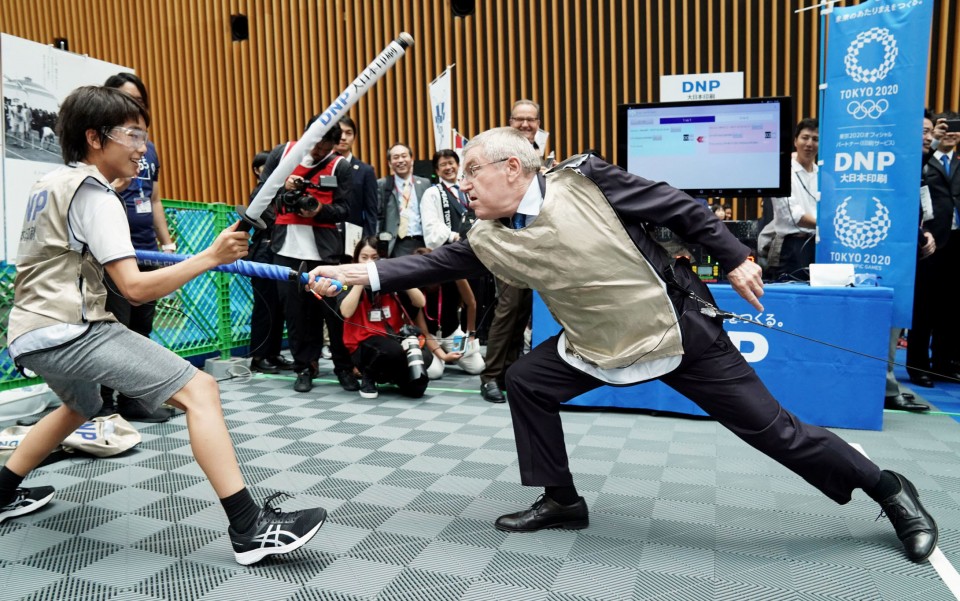 (International Olympic Committee President Thomas Bach fences at a promotional event in Tokyo on July 24, 2019, for the 2020 Olympics in the Japanese capital. Bach is a former foil fencer who competed for West Germany and won a team gold medal at the 1976 Summer Olympics in Montreal.)[Pool]

The IOC will begin sending invitations to all NOCs taking part in the games from its headquarters in Lausanne, Switzerland, one year ahead of the opening ceremony.

While transportation and the capital's heat have been the host city's major concerns ahead of the 2020 Games, Koike said Tokyo is making progress in addressing the issues.

"We are at the stage of finishing off our preparation efforts," Koike said. "Some of our venues are completed, and we are currently testing our specific measures at the Olympic test events."

The designs of the medals to be presented at the 2020 Olympics were unveiled by the organizing committee in front of Japanese athletes, including men's national basketball team member Yuta Watanabe, who said he hopes to help Japan win its first Olympic medal in the sport.

"We haven't been competing in the Olympics lately," Watanabe said of Japan's men's team, which was granted a host nation berth. "I'm really happy that we can compete at the 2020 Games. I want to win a medal."

Weightlifter Hiromi Miyake, a two-time Olympic medalist, said, "The best thing about winning a medal is that it also makes everyone happy."

While the ceremony was limited to invited guests, including government officials, sponsors and sport bodies, people around the country expressed excitement about the games next summer.

In the capital, the organizing committee held an event where members of the public were able to try activities based around 17 of the 33 Olympic sports. A countdown clock, marking the days until the games, has been installed near JR Tokyo Station.

"Even the top players are really friendly and talk to fans. I hope more people will notice the attraction of this sport," the 43-year-old said. "I hope to get hold of the tickets...and enjoy the atmosphere of the competition."