In a summary released after a two-day meeting in Chantilly, France, the G-7 finance ministers and central bank governors expressed "serious regulatory and systemic concerns" about the Facebook project, casting doubt on the social media giant's plan to create a cryptocurrency-based payment system as early as next year. 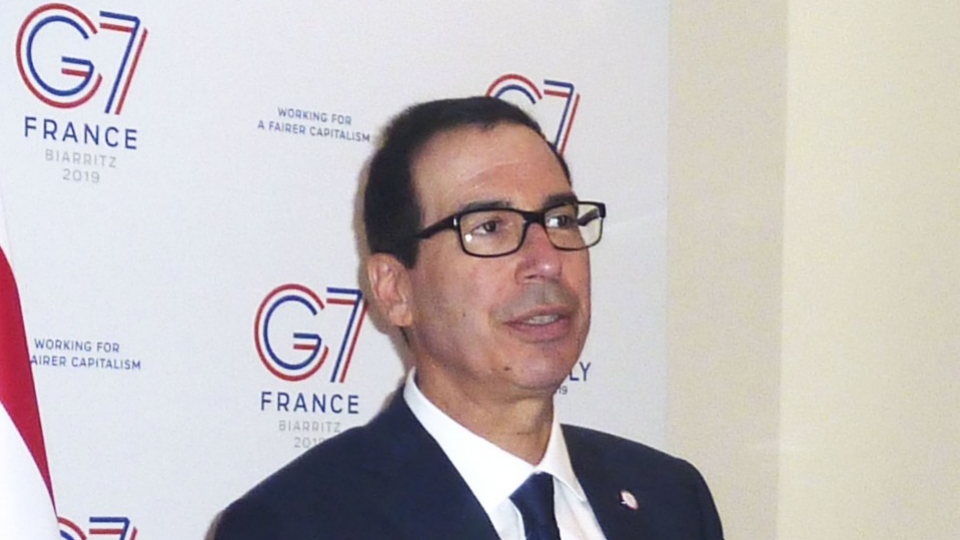 The G-7 will coordinate with the broader Group of 20 economies, the Financial Stability Board and other standard-setting bodies in effectively regulating and overseeing Libra and other so-called stablecoins -- cryptocurrencies pegged to real currencies -- according to the summary.

The meeting involving Britain, Canada, France, Germany, Italy, Japan and the United States plus the European Union was dominated by Libra and proposed cryptocurrency retail payments, given Facebook's global reach with its user base of 2.7 billion people, about a third of the world's population.

Regulators, lawmakers and central bankers have been scrutinizing the project, with critics saying it could affect the global financial system and undermine traditional roles of governments such as issuing currency.

Japanese Finance Minister Taro Aso said the G-7 "was able to send a strong message" that Facebook needs to address regulatory concerns before launching such a service and that the highest standards of financial regulation would need to be met in the case of Libra, an instrument that could affect monetary sovereignty and the functioning of the international monetary system.

The summary said the ministers including Aso, French host Bruno Le Maire and U.S. Treasury Secretary Steven Mnuchin agreed that those concerns must be addressed "before such projects can be implemented."

The meeting -- which came a month after Facebook announced the project -- "paved the way for tying up with the G-20, FATF and others for further discussions" on Libra, Aso told reporters after the meeting, referring to the Financial Action Task Force on Money Laundering, an international body.

The seven developed economies expect a G-7 working group to present a final report on policy recommendations for stablecoins by the next meeting of G-20 finance ministers and central bank governors, set to take place on the sidelines of the annual meetings of the World Bank and the International Monetary Fund in October.

The G-20 comprises the G-7 plus major emerging economies such as China, India, Brazil and South Africa.

Aside from Libra, the G-7 finance chiefs agreed on an approach to taxation of multinational companies including big internet companies, according to the summary.

They affirmed that new rules should be developed to allow taxation of activities that take place without a physical presence.

The G-7 also agreed on the need for minimum corporate taxation to prevent information technology giants such as Facebook and Apple Inc. from seeking out low-tax countries to boost profits.

"Ministers agreed that a minimum level of effective taxation...would contribute to ensuring that companies pay their fair share of tax," the summary said. "The tax level to be set would depend on concrete design features of the rules."

A specific tax rate would emerge as early as next year in talks taking place at the Organization for Economic Cooperation and Development.

On the world economy, the G-7 shared the view that "while global growth appears to be stabilizing with an expected moderate pick-up in 2020, risks remain tilted to the downside," according to the summary.

"Most importantly, trade and geopolitical tensions have intensified," it said, in reference to trade disputes between the United States and China, as well as rising tensions over Iran's nuclear development.