Organizers of the 2020 Tokyo Olympics on Wednesday unveiled the gold, silver and bronze medals to be created entirely from metals recycled from mobile phones and other electronic devices, as they marked exactly a year to go until the games.

With a diameter of 85 millimeters, the gold and silver medals will be the heaviest ever used at a Summer Games, weighing in at 556 and 550 grams, respectively, the local organizing committee said. 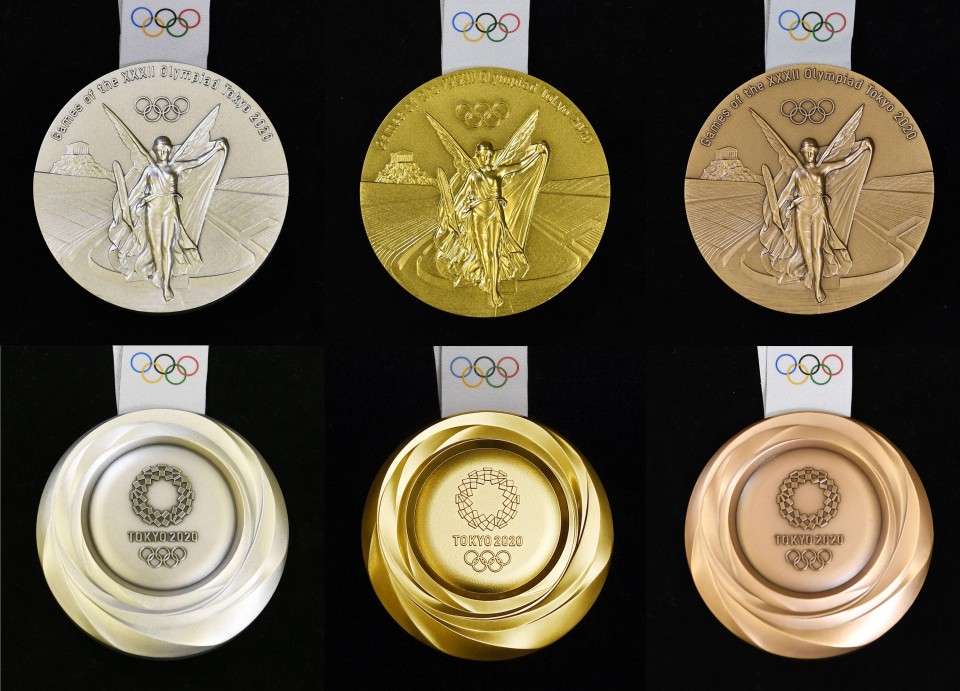 On the back, the winners' medals bear the Olympic rings and Tokyo 2020 logo inside a swirl design, intended to sparkle with myriad patterns of lights to represent the "energy" and "diversity" of the games.

The front continues the long-standing tradition of depicting Nike, the mythical Greek goddess of victory, as required by the International Olympic Committee.

Conceived by Japanese designer Junichi Kawanishi, the medals were picked by a selection panel in July after a competition open to design professionals and students that drew more than 400 entries.

"With their shining rings, I hope the medals will be seen as paying tribute to the athletes' efforts, reflecting their glory and symbolizing their friendship," Kawanishi, 51, said.

The side of each medal will be inscribed with the name of the event for which it is presented.

The ribbons from which the medals will be hung are made from recycled polyester and employ traditional Japanese design motifs while incorporating the checked pattern of the Tokyo 2020 logo.

They are designed to allow blind people to distinguish the color of the medal by touching the ribbon.

"My first impression was that they are very shiny," Takuya Haneda, a Japanese slalom canoeist who won the bronze at the 2016 Summer Games in Rio de Janeiro, said at a ceremony in Tokyo to reveal the medals. "They achieve a gradation of light and shadow. The designs are wonderful."

Approximately 5,000 medals are being produced after enough metals were collected from small used devices donated by the Japanese public in a nationwide campaign that ran from April 2017 through March.

About 78,985 tons of devices were collected during the period, which yielded 32 kilograms of gold, 3,500 kg of silver and 2,200 kg of bronze, according to the Tokyo organizing committee.

The designs of the 2020 Paralympic medals will be disclosed in August.