Kim Min Joong, a 23-year-old South Korean, is expecting his working holiday visa will soon be replaced by a new residential visa that the Japanese government introduced in April to bring in more foreign workers.

"Two years in school are not enough to master Japanese cuisine. Thanks to the revised law, I believe I will have more time to learn cooking techniques and gain good experience," said Kim at a "teppanyaki" iron-griddle steak restaurant in Tokyo's Roppongi district.

On the back of its rapidly graying population and declining birthrate, Japan launched the so-called Specified Skilled Worker No. 1 status to cope with a chronic labor shortage in 14 sectors, including food service.

Out of 460 who sat the exams, 347, or 75.4 percent, including Kim, passed the language and skills tests for the food service sector held in Tokyo and Osaka in late April. Another 1,364 people have taken the exams since, but the results have not yet been released.

Having moved to Japan while still in high school due to his father's job, Kim went on to study at a cooking school in Tokyo for two years.

Interested in food since childhood, he has chosen to focus on teppanyaki. "Turners look cool," he says by way of explanation, referring to the spatulas used in grilling steak.

"One day I hope I can open a teppanyaki restaurant in South Korea to spread Japanese food culture there," said Kim, who is from Seoul.

According to Tatsuya Murata, manager at the Kisentei Tokyo Midtown Restaurant where Kim works, it usually takes at least one year before apprentice chefs have a chance to grill meat in front of customers. In the meantime, they are busy with food preparation, supporting the chefs and clearing away dishes.

"Communication skills in Japanese are needed because the cooks are supposed to chat with customers while grilling," said Murata, who has trained Kim since April. 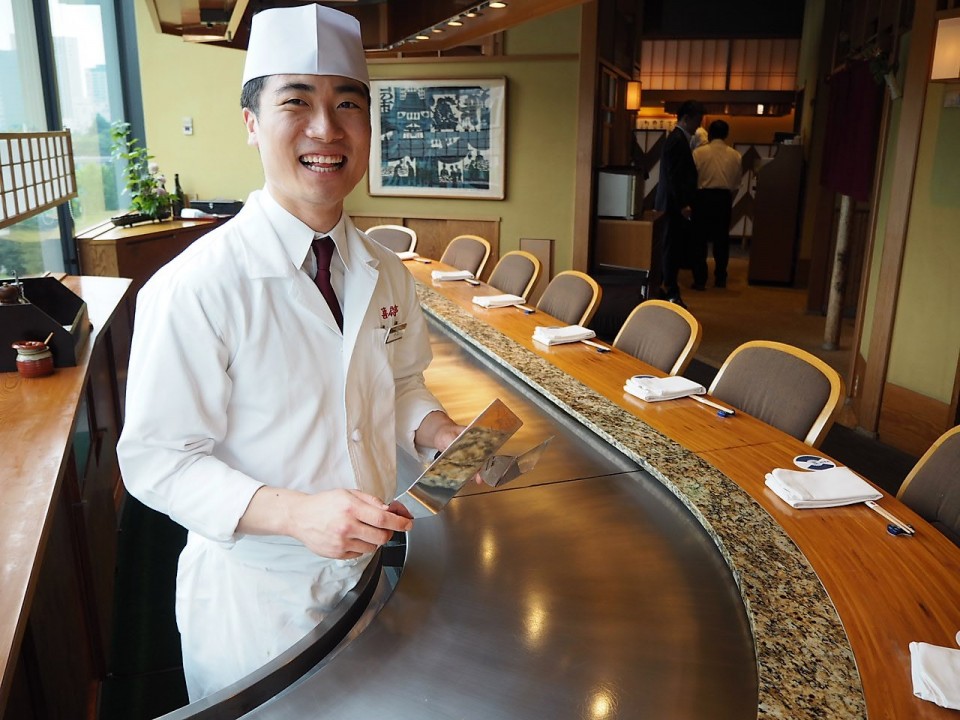 Shoji Murakami, head of the general affairs department at Ningyocho Imahan Co., which operates Kisentei, said that due to the labor shortage many of its restaurants are forced to turn away customers at times because they don't have enough cooks and servers.

"We have missed opportunities because of a lack of manpower," said Murakami.

With the help of foreign nationals, the Tokyo-based operator of long-established sukiyaki and shabu-shabu meat and vegetable hot pot restaurants hopes it can provide better service, which will eventually lead to more sales, he said.

Two Vietnamese workers at Imahan have passed the language exam and are applying for the visa, with other foreign workers expressing an interest in taking the test.

The Japanese government expects up to 345,000 foreign nationals to acquire the new visa status, including up to 53,000 people in the food service sector, an estimate critics describe as "too optimistic" amid fierce competition for labor with South Korea among other countries.

Megumi Sakamoto, a multicultural studies professor at Fukushima University, said the turnover rate is high even among Japanese, meaning there is room for improvement, in particular by raising wages.

Workers at ramen shop operator Hiday Co. formed a labor union in spring 2018 in a move aimed at requesting the company improve labor conditions, including wage hikes. Of some 8,800 part-time workers at the company's Hidakaya ramen shops, about 4,000 are foreign nationals, many of whom are believed to be union members.

Ippei Torii, chair of the board of the Solidarity Network with Migrants Japan, stressed the importance of business operators properly managing employees' working hours at eateries, including those open until late at night.

Long hours and less than stellar pay aside, for many foreigner workers, language could be the biggest challenge in food-service jobs that require more than a few stock phrases.

Even Kisentei's Kim, who has a strong command of Japanese after living in the country for nearly six years, sometimes runs into difficulty. "Japanese words don't come out from my month sometimes, when I get nervous," he said.

"A good grasp of Japanese is needed in the food service sector when serving customers, for example, or delivering" to customers' houses, said Fukushima University's Sakamoto.

The professor said foreign workers typically learn standard Japanese in textbooks, but may find it difficult if they end up working in areas where their customers speak in a local dialect.

In three months, 320 people, including ex-job trainees who are exempted from taking the language exam, have applied for the new visa status. As of the end of June, only 20 have been accepted, according to the Immigration Services Agency.

According to an agency official, it is not unusual for a change of visa status to take months before being issued, especially since the new system has just been introduced.