North Korea launched two short-range missiles into the Sea of Japan off its east coast on Thursday morning, the South Korean military said, with security officials in Seoul concluding they were ballistic missiles of a new type.

The launches were the first by North Korea since U.S. President Donald Trump and North Korean leader Kim Jong Un agreed at a June 30 meeting to resume stalled denuclearization talks between the two countries.

South Korea's Joint Chiefs of Staff said that both missiles were launched from near the Hodo Peninsula, with the first flying about 430 kilometers and the second about 690 km before falling into the sea. The range of the second would bring all of South Korea and parts of Japan within striking distance.

The South Korean presidential office said in a statement that after analyzing the launches the standing committee of the National Security Council concluded them to be "a new type of short-range ballistic missile."

The committee will make its final judgment after a detailed joint assessment with the United States, it said.

In addition, committee members expressed strong concern that such actions by North Korea are not helpful to the efforts of alleviating military tensions on the Korean Peninsula, the statement added. 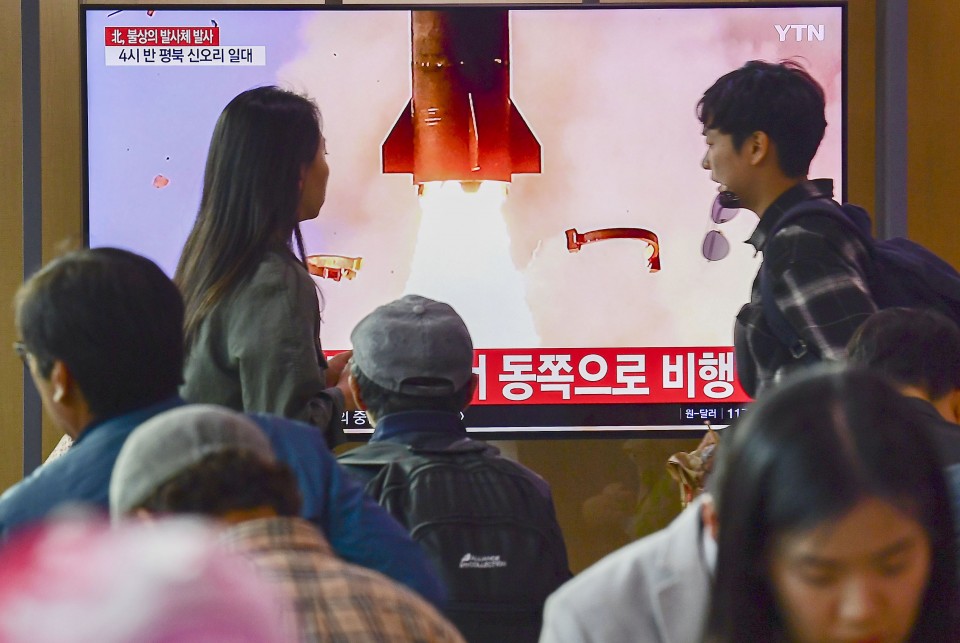 Observers have speculated that the launches could be aimed at pressuring the United States and South Korea into calling off a joint military exercise scheduled for August. North Korea warned just last week that it may reconsider its suspension of nuclear and intercontinental ballistic missile tests if the joint military exercise goes ahead.

Japanese Defense Minister Takeshi Iwaya, speaking to reporters, indicated that if the missiles turn out to be the same type of short-range ballistic missile fired back in May, Thursday's launches would constitute a violation of U.N. resolutions banning North Korea from using ballistic technology.

Diplomatic sources said Thursday that North Korean Foreign Minister Ri Yong Ho has decided against attending this year's ASEAN Regional Forum in Bangkok in August, lowering the likelihood of an early start to the U.S.-North Korea denuclearization talks on the sidelines of the meeting.

South Korea's presidential office said the government had detected signs of a North Korean missile launch and been watching them closely. President Moon Jae In was immediately briefed on the launches after they occurred, it added.

Biegun and Lee also spoke by phone to discuss the North Korean missile activity, according to the South Korean Foreign Ministry.

The missile launches come as the United States and North Korea have been calling on each other to make concessions over the stalled nuclear talks that their leaders agreed to resume at their last meeting in the Demilitarized Zone dividing the two Koreas.

North Korea has also been stepping up criticism of a joint military exercise planned between the United States and South Korea in August, even hinting at resuming nuclear and intercontinental ballistic missile tests if the two countries go ahead as planned.

In a report on July 16, North Korea's official Korean Central News Agency quoted an unnamed Foreign Ministry spokesman as saying that the planned U.S.-South Korean exercise would violate the commitment Trump made to Kim at their summit in June 2018 to suspend joint military drills.

"Our discontinuation of the nuclear and ICBM tests and the U.S. suspension of joint military exercises are, for all intents and purposes, commitments made to improve bilateral relations. They are not a legal document inscribed on a paper," the official said then.

"With the U.S. unilaterally reneging on its commitments, we are gradually losing our justifications to follow through on the commitments we made with the U.S. as well," the spokesman added.

When North Korea fired the missiles on Thursday morning, Abe was in Yamanashi Prefecture west of Tokyo, where he has been vacationing since the previous day. The Japanese leader went ahead with a round of golf with his acquaintances at the foot of Mt. Fuji.

Chief Cabinet Secretary Yoshihide Suga told reporters in Tokyo that he is keeping the prime minister up to date on the situation, while coordinating closely with the United States and South Korea in gathering and analyzing relevant information.

Japan called the missile tests on May 9 a clear breach of U.N. Security Council resolutions that prohibit North Korea from launching any type of ballistic missile.

But Trump downplayed them, even though his security adviser John Bolton and then acting U.S. Defense Secretary Patrick Shanahan recognized them as a violation.

In a report Thursday, the Dong-A Ilbo, a South Korean daily, quoted South Korean government sources as saying that as of Wednesday, preparations for a surface-to-air missile launch had been under way in a coastal area in North Korea's east.