The 33-year-old Kakuryu, who is gunning for his sixth top-division championship, thrust down No. 5 maegashira Kotoshogiku (5-6) to hang on to his perfect record at the 15-day meet at Dolphins Arena.

The Mongolian grand champion stood firm despite allowing Kotoshogiku to open the final match of the day with a belt hold. Kakuryu pushed the maegashira toward the edge before toppling him to finish the bout in 11.5 seconds. 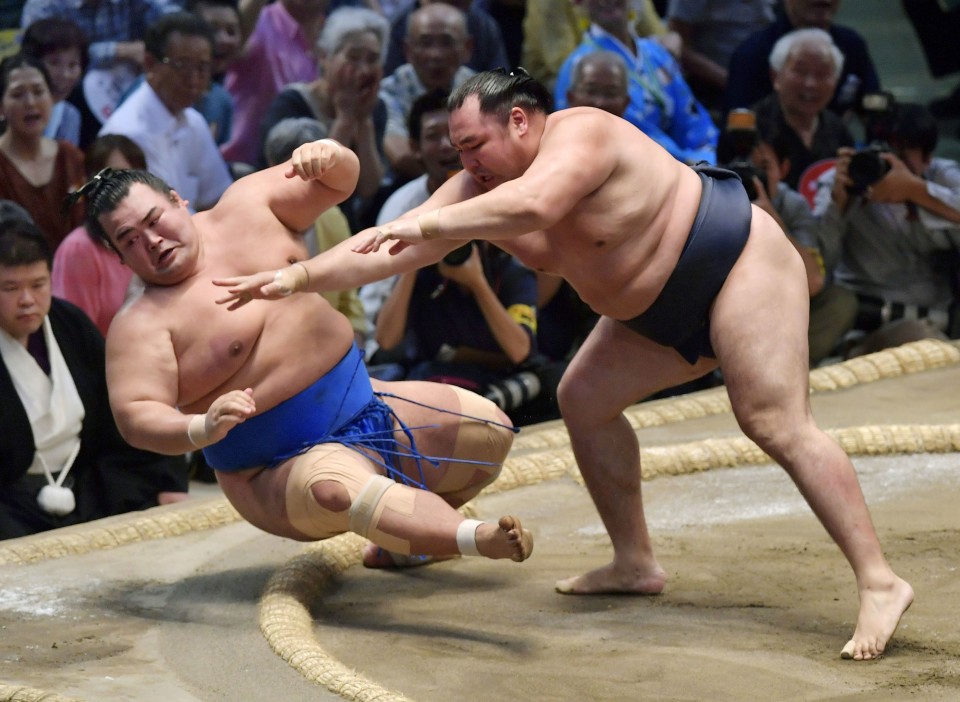 Yokozuna Hakuho is alone in second place, trailing Kakuryu by one win, with No. 7 Tomokaze and No. 16 Terutsuyoshi sitting behind with nine wins and two losses.

Hakuho, who is aiming for a record-extending 43rd championship, improved to 10-1 after his scheduled opponent, ozeki Takayasu, pulled out due to a left-elbow injury sustained earlier in the tournament.

The Mongolian yokozuna started the 15-day tournament with eight straight wins but suffered his first loss to No. 4 maegashira Ichinojo (7-4) on Monday, giving Kakuryu the sole lead. Hakuho will fight popular sekiwake Mitakeumi (7-4) on Thursday.

Takayasu, who had an 8-2 record after winning his bout on Tuesday, joined the other three wrestlers at the sport's second-highest rank on the sidelines of the fourth meet of the year. Takakeisho, Tochinoshin and Goeido have all pulled out due to injuries.

Among the "sanyaku" wrestlers, competing in the three ranks below yokozuna, Mitakeumi was able to prevail on the 11th day of the meet.

In their first matchup, Mitakeumi survived a scare against No. 4 Meisei (2-9). They stood locked in a lengthy stalemate at the edge before Mitakeumi swung the 150-kilogram Meisei out of the ring.

Sekiwake Tamawashi (1-10) was again unable to show off the technique and power that enabled him to win his maiden championship in January, losing to Ichinojo.

Abi (5-6), who is making his sanyaku debut as komusubi, looked in control of his match against No. 2 Aoiyama (5-6) before being pushed out of the ring by the Bulgarian.

No. 16 Terutsuyoshi improved to 9-2 after beating No. 11 Nishikigi (3-8). Following a pair of false starts, Terutsuyoshi lifted Nishikigi by the armpits before driving him out.

No. 1 maegashira Asanoyama defeated his top-ranked counterpart Hokutofuji (7-4) to improve to 5-6. Asanoyama, the winner of the May meet, resisted Hokutofuji's neck hold before driving him out.