70 yrs on, struggle for exoneration in Mitaka case continues

Kenichiro Takeuchi has gone through numerous hardships as the son of a death row inmate who was convicted of a mysterious fatal train accident in chaotic postwar Japan.

Leading a life of obscurity and changing jobs nearly a dozen times, Takeuchi, 76, still lives with the dream of his father being exonerated posthumously for what he believes was a wrongful conviction.

His father, Keisuke, a labor union member and former train driver of the now-defunct Japanese National Railways, was sentenced to death for sabotaging a train at Mitaka Station in Tokyo on the evening of July 15, 1949, killing six people and injuring 20 others.

However, he proclaimed his innocence, despite initially confessing he was behind the crash. 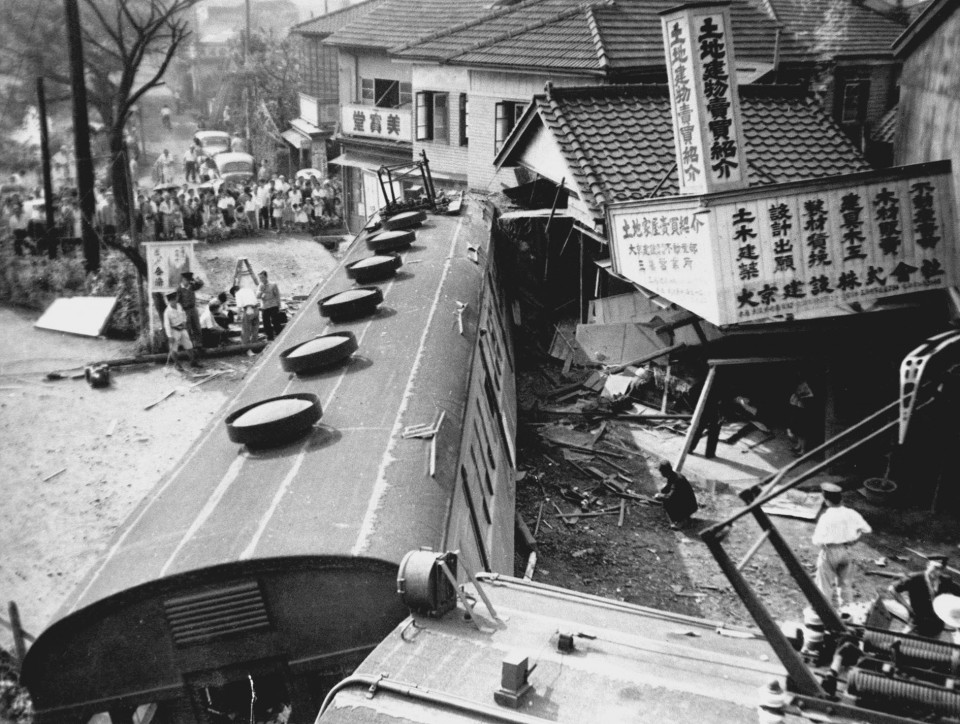 "I've never opened up about my father to my colleagues...I have developed a gloomy character," Takeuchi said in a recent interview with Kyodo News at his home in the suburbs of Tokyo about what famously became known as the Mitaka Incident.

While seeking a retrial to be exonerated, his father died of a brain tumor in prison in 1967 at the age of 45.

"I was told that the death of my father closed the case. But I felt so sorry for him being convicted for something he never did," Kenichiro said.

The case was revived more than 40 years later when a lawyer, Shoji Takamizawa, visited Kenichiro in 2009.

Takamizawa, 77, had examined judicial records of the Mitaka Incident that convinced him of Takeuchi's innocence, and he strongly urged the son to seek a retrial on behalf of his father.

"I was glad that Mr. Takamizawa visited me, as I couldn't have done anything for my father by myself, other than waiting for something to happen. I thought I finally found a small ray of hope," said Kenichiro, who on the advice of Takamizawa filed an appeal for a retrial with the Tokyo High Court in 2011. 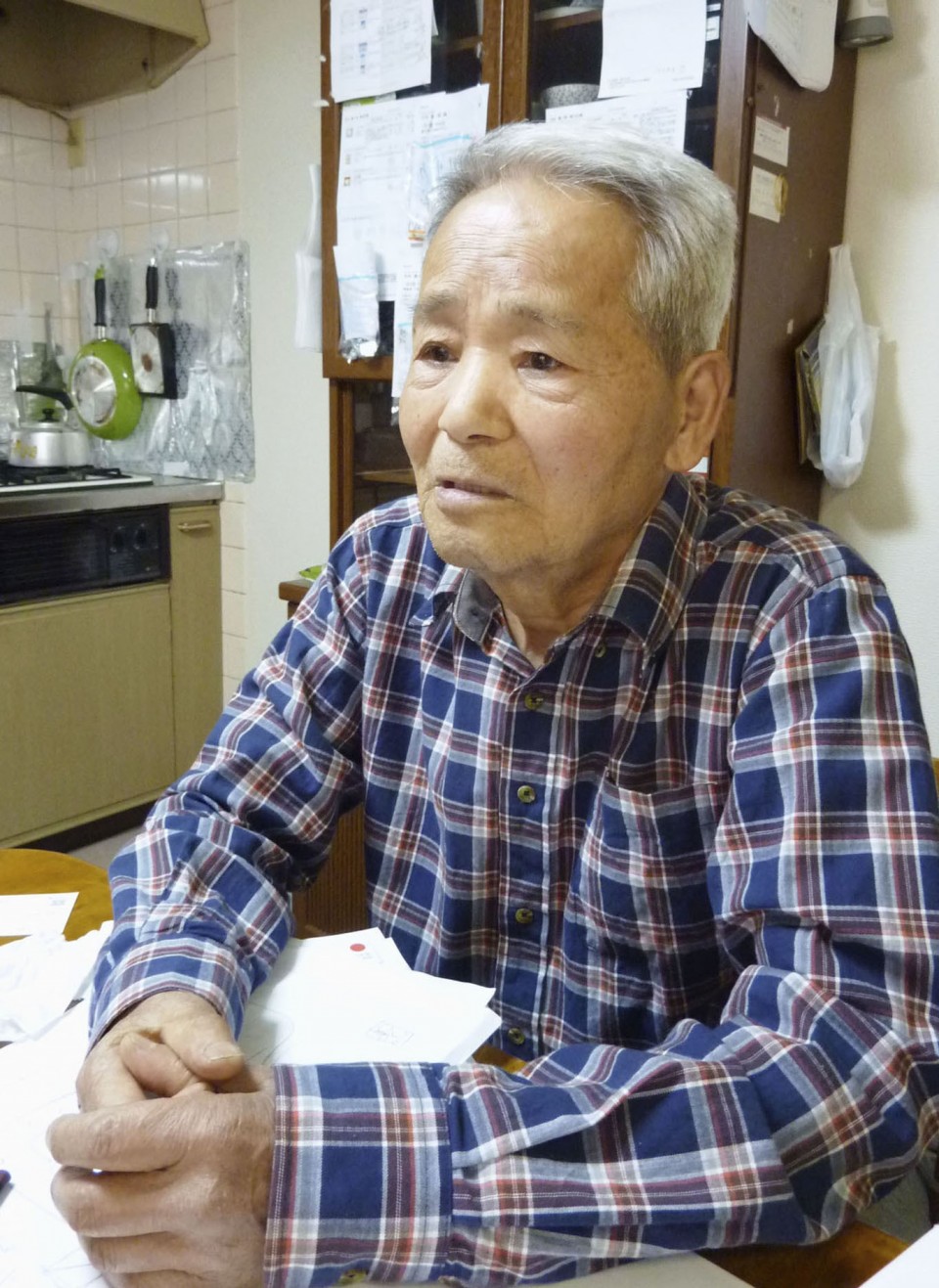 Prior to the 70th anniversary of the Mitaka Incident, Kenichiro, who has also struggled with cancer, is awaiting the court's decision on whether to reopen the case, with expectations that such good news might bring him some solace after so many years.

Keisuke was arrested and indicted, together with nine other labor union members, at a time when the nationwide railway operator was aiming for massive job cuts. All the defendants, other than Takeuchi, were members of the Japanese Communist Party, which opposed layoffs.

Takeuchi had initially denied his involvement. But he later repeatedly changed his story -- admitting to a conspiracy with the other defendants, then saying he had acted alone to plan and execute the entire incident, before finally claiming his innocence once again.

Despite a lack of conclusive evidence, he eventually received the death sentence based mostly on his confession, while the nine other defendants were acquitted as it was ruled that Takeuchi alone was responsible for the disaster.

During an initial petition for a retrial before his death, Takeuchi, feeling hopeless, claimed he had made a false confession in the belief that he might at least evade the death penalty.

During the incident, the victims were crushed by the seven-car train, which suddenly started moving within the Mitaka Station yard, bursting through a track-end bumper and plowing into the station as well as some nearby buildings before finally coming to a halt.

As part of efforts to persuade the high court to reopen the decades-old case, Takamizawa, along with five other like-minded lawyers, worked to find "new evidence" to prove Takeuchi's innocence with the help of several experts.

The final ruling found Takeuchi had raised the first car's pantograph -- the apparatus mounted on the roof of the train to collect power -- to activate the train, and then jumped off shortly after that.

Countering this, the lawyers argued, citing a traffic engineering expert's study, not only the pantograph of the first car but also of the second car was raised when the train went out of control.

The lawyers also focused on the fact that the headlamp of the seventh car was on when the disaster occurred, and claims it would have been turned off, in accordance with the JNR's operating guidelines, before the train was activated.

Given these factors, the lawyers note in their opinion paper submitted to the high court, "It was impossible for (Takeuchi), in terms of time, to raise pantographs of the first and second cars and run to the seventh car to turn on the headlight, thus the final ruling that he committed the crime alone is unacceptable, and should be reviewed."

The prosecutors argue the headlight was already turned on before the fatal tragedy.

Following testimony by a man that said he saw Takeuchi near Mitaka Station around the time of the incident, the defense team asked a behavioral psychologist to conduct an experiment to determine if the witness would have been able to identify Takeuchi under evening viewing conditions.

In a recreation of the scene examining several test subjects -- only a few of whom could recognize acquaintances -- the psychologist concluded that it would have been almost impossible for the witness to recognize Takeuchi's face clearly even under the brighter conditions in the experiment.

The lawyers also believe, based on confession statements by his wife and Takeuchi compiled soon after his arrest, Takeuchi was at home with his family when the Mitaka Incident occurred.

The defense team presented these findings during talks with the high court and prosecutors that were completed last December.

"Objective evidence goes against Mr. Takeuchi's temporary confession and the final ruling, and it is quite obvious that he was sentenced to death unfairly," Takamizawa said. "We have to correct errors of the judicial system."

The prosecutors, however, have claimed the final ruling on Takeuchi confirmed his guilt in reasonable ways, seeking the dismissal of the appeal.

Kenichiro has survived his wife, who believed her father-in-law was innocent to the end of her life and welcomed the unexpected encounter with Takamizawa. But he has become estranged from his siblings after taking up the crusade.

"My brothers and sisters do not want me to come forward in seeking the retrial, but their attitude will change if the high court comes to a good decision within my own lifetime," he said.

The Mitaka Incident was one of three mysterious cases involving the Japanese National Railways in the summer of 1949.

On July 6, JNR President Sadanori Shimoyama was found dead in Tokyo, apparently run over by a train, while on Aug. 17, a passenger train derailed near Matsukawa Station in the northeastern prefecture of Fukushima due to alleged sabotage, killing three crew members and leading to the indictment of 20 labor union activists, all of whom were eventually acquitted.

The truth surrounding the Shimoyama and Matsukawa incidents remain unknown.

The three incidents were widely believed to be linked to JNR's efforts to introduce job dismissals under the U.S.-led occupation, with union activists targeted by authorities in an attempt to clamp down on the protest campaign against the layoffs.