Thai cave boys' ordeal proves an opportunity for many

A little over a year ago the world's attention went to a cave in northern Thailand where 12 boys and a coach from the Wild Boars youth soccer team went missing, flood waters stranding them underground for more than two weeks.

What ensued was blockbuster movie-worthy, the boys and their coach making a miraculous escape thanks to the help of a crack multinational rescue team, with the world following every twist, turn and tragedy in the story.

Twelve months later, the incident, which has come to be known as Miracle at Tham Luang, has taken the young soccer players to places and given them opportunities they would never have imagined, while the local community and economy has been energized by the global spotlight. 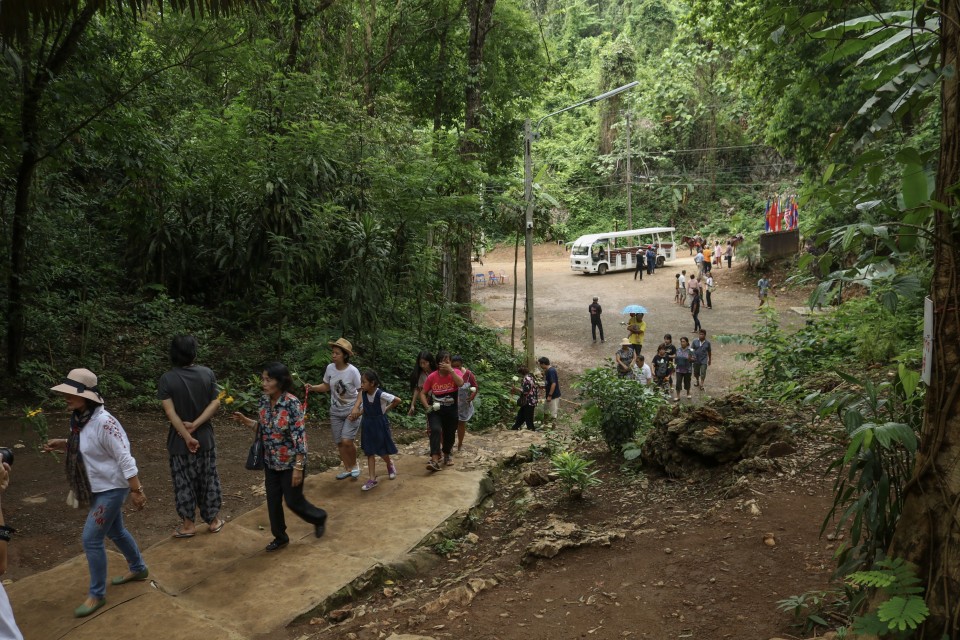 Narongsak Osottanakorn, who headed the Tham Luang cave rescue operation as outgoing Chiang Rai governor, reflected in an interview with Kyodo News on the extreme pressure of the moment.

"When I announced the mission was over, I felt relieved, no longer having to handle the expectation of the whole world," Narongsak said, still no doubt saddened by the loss of one of the Thai rescuers to the cave's waters.

"I knew the chance of success was only 50 percent, but I had to tell the public I expected a 100 percent chance of success. It was more than pressure, it was like the whole world was on my shoulders," he remembered.

Now, the expectation has turned to enthusiasm, with the boys' story purchased for a film and the local community coming together to both celebrate a new sense of togetherness, all while people in the area do their best to make financial hay.

Three of the boys and their coach who were stateless were granted Thai citizenship and received passports after their rescue, giving them a more secure future. They were also able to accept invitations to Argentina for the 2018 Summer Youth Olympic Games in Buenos Aires, as well as to Britain and the United States.

Cave-trapped boys to fly to Argentina, U.S. in Oct.

They set up a company called "13 Tham Luang Co." to manage and protect their copyright control over the depiction of their now-famous subterranean stay.

The company, which is headed by coach Ekkapol Chantawong, in April reached a deal with video streaming giant Netflix to make a mini-series for which each of the Wild Boars will be paid 2-3 million baht ($65,000-97,000), according to local media reports.

One of the boys, Adul Sam-on, who recently turned 15, was recognized by Middlebury College in the U.S. state of Vermont in May for helping communicate with British divers who discovered the group, despite being weak after spending more than seven days in the cave.

But it is not just the boys who are making the best of what could have been a terrible tragedy.

The cave itself remains closed to the public, but its vicinity is undergoing a transformation to become one of Chiang Rai Province's major tourist attractions.

An art gallery has been built outside the cave. Opened for visitors last December, it exhibits three large paintings that show scenes of the rescue and other moments. 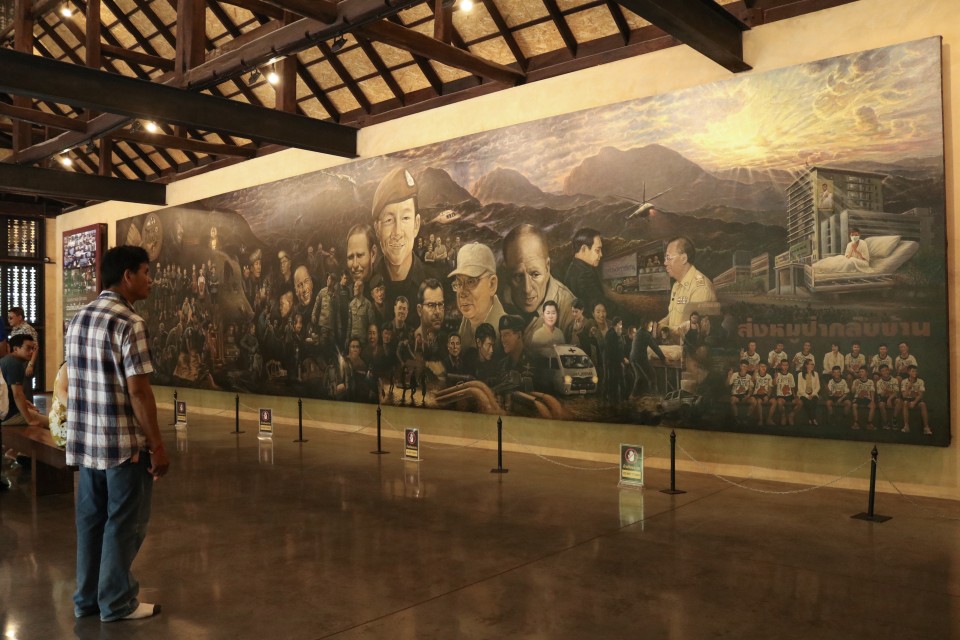 In front of the art gallery stands a 3.2-meter tall statue of Saman Kunan, the Thai navy SEAL who died while ferrying oxygen supplies into the cave. Thirteen bronze wild boars mill at the statue's base, each representing one of the rescued.

With many Thai tourists and foreigners now visiting the area, locals have set up stalls to sell all kinds of things, including fruits, drinks, lottery tickets, and various rescue-related memorabilia.

Saifon Ouikum, 34, used to sell local Mae Sai wine at the nearby border with Myanmar. But after seeing the influx of tourists to the cave area, she moved there and set up her stall last October.

"During the holidays such as New Year and Songkran (the traditional New Year in Thailand), so many tourists came to the cave that I was able to earn around 7,000 to 10,000 baht per day," Saifon said.

Thai and foreign visitors who come to the area walk toward the cave's gate before placing a flower or garland at the statue of a goddess called "Nang Non" (reclining lady) at the cave entrance.

Chayana Tharanithon, a 17-year-old boy who visited the cave with his parents, said he wants to take a tour once it is reopened "to see how the incident happened."

Narongsak, the former governor, said as many as 20,000 tourists visit the area each day on some holidays. 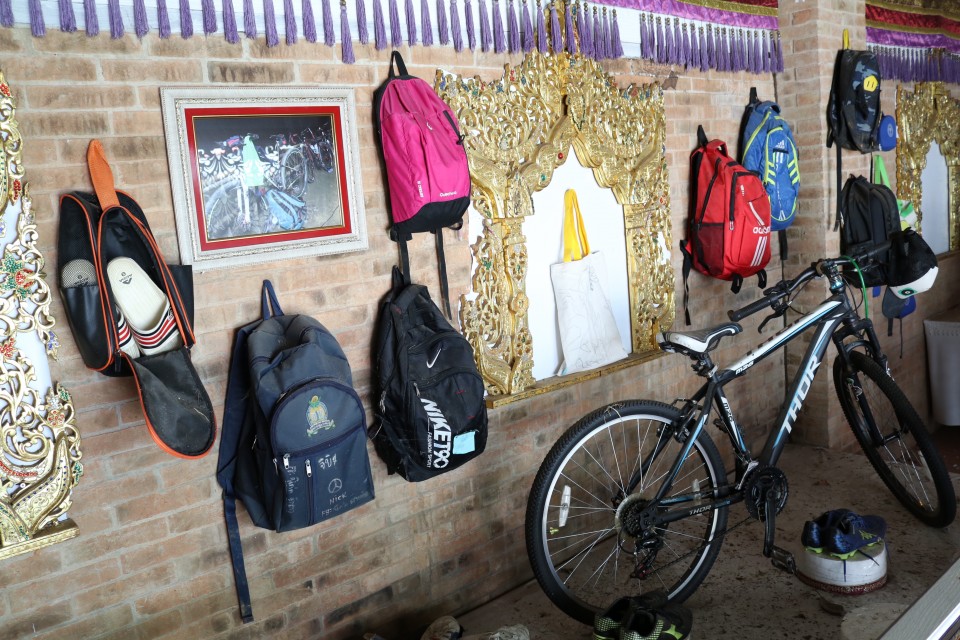 Although it would be difficult to develop some parts of the area because they are part of a national park, he said it should be developed as a historical site "so people can learn how the rescue team worked each day."

"There are many more stories waiting to be told."

On June 23, 2019, the one-year anniversary of the day the team was trapped by the sudden flood, more than 5,000 people gathered in the cave area near the town of Mae Sai on the Thai-Myanmar border to participate in a fun run and bike ride event held to honor the rescuers.

Nine of the boys and the coach tried to slip unnoticed into a 6-kilometer run, but they were quickly recognized by spectators keen to show their support.

For 16-year-old Pipat "Nick" Phothi, one of the 12 Wild Boars, seeing his former teammates at events like the one in Mae Sai brings nothing but joy.

"The best moment throughout the year is whenever all 13 of us get together. I like every event held for us. I get happy every time we reunite, whether in the country or abroad," he said.