International Olympic Committee President Thomas Bach said Thursday the Tokyo 2020 Games will deliver the Olympic message of peace, and at the heart will be prayers and thoughts for Tohoku and Hiroshima.

In an exclusive interview with Kyodo News, Bach said next year's sports extravaganza will bring global attention to the Tohoku region, struck by a devastating earthquake and tsunami in 2011, and Hiroshima, the city destroyed by the world's first atomic bombing. 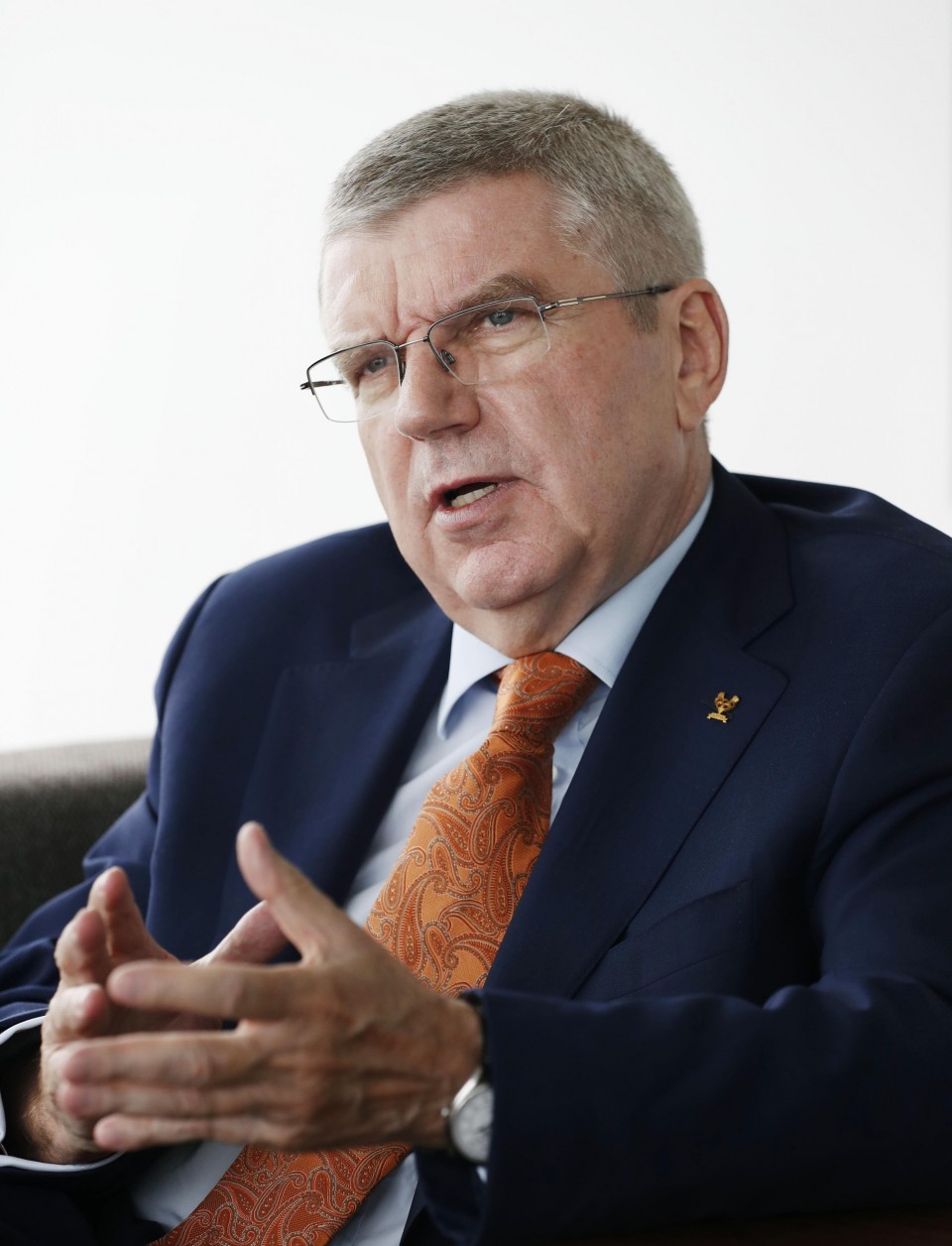 The 2020 Olympic torch relay will begin in Fukushima Prefecture, which will also host opening matches for baseball and softball. Soccer matches will be hosted in Miyagi Prefecture, also part of the Tohoku region which was most affected by the disaster.

The Atomic Bomb Dome in Hiroshima is among the World Heritage sites included in the torch relay route.

Bach will continue to play a role in the "reconstruction Olympics" legacy when he reunites with students from Tohoku next summer to watch a baseball or softball game in Fukushima, still recovering from the natural and nuclear disaster that left about 18,000 people dead or missing.

Earlier this year, the 65-year-old German invited five students from quake-hit areas to Switzerland for a homestay program. Next year, the Japanese teenagers will be attending the Games as the IOC's guests, joining Bach in the spectator stands.

"I'm looking forward to seeing them again on this occasion. I'm even more happy for them that they can follow the Games and be a part of the Games, because it's not so easy to get tickets. They know that they will have tickets," Bach said.

Bach said it is important for him to get first-hand information about the current situation in Tohoku from the victims and learn how the Olympics can contribute to recovery efforts.

Bach says he is still discussing scheduling logistics with the organizers for a possible visit to Hiroshima when the torch relay passes through the Hiroshima Peace Memorial Park, dedicated to the victims of the 1945 U.S. atomic bombing.

The torch relay starts from Fukushima on March 26, 2020, and travels through all 47 prefectures in Japan. It lasts for 121 days and completes its journey in Tokyo.

July 24 marks one year until the opening ceremony of the Tokyo Olympic Games, and Bach is happy to see the excitement building in Japan as it gears up to host its second summer Olympics.

"It's really a great excitement and I'm really looking forward to this one-year-to-go for two reasons," Bach said.

"One is that the organizing committee has done a great job in preparing the Games, and secondly to see how the Japanese people are uniting behind the Games. When you see the figures of applications for volunteers, ticket sales, and when you see the engagement of the business community and cultural community, that is really exciting."

Bach, who was elected IOC president in the same IOC session held in Buenos Aires in 2013 where Tokyo was named the 2020 Olympic host city, admits the Tokyo Games hold a special place in his heart.

Regarding organizers' concerns about heat and rainfall, Bach said the risks give the committee an opportunity for thorough planning and exchange of ideas and opinions from past games hosts, which he believes is already being done.

He said the Japanese capital, despite being selected before the Olympic Agenda 2020 reforms were approved, will reap the benefits of the changes and pave the way for future editions of the Games.

Tokyo became the first Olympic host city to be able to propose non-Olympic sports under new Agenda 2020 reforms approved by the IOC in 2014. As a result, baseball/softball, karate, skateboarding, sport climbing and surfing were added to the program for 2020.

"Tokyo is benefitting from these reforms in different aspects. Tokyo will be the first Olympic Games where we can speak of having practically achieved gender equality with regard to participation of women with around 49 percent," he said.

"The five new sports...will make the Games altogether more urban, more female and more youthful. Tokyo will also benefit with regard to the sustainable planning of the Games by being able to make use of 56 percent of existing infrastructure. They can also make a savings of $4.3 billion (because of the Olympic Agenda 2020 and its New Norm)," he said.

Bach said he had a chance to meet newly appointed Japanese Olympic Committee chief Yasuhiro Yamashita during his visit to Osaka for the G-20 summit last month, and he thinks the former Olympic judo champion is well aware of his priorities and responsibilities.

A corruption scandal involving former JOC President Tsunekazu Takeda tarnished the image of the 2020 Games, but Bach said Yamashita can take comfort in the fact that he has the full backing of the host nation's National Olympic Committee.