A man apprehended over a deadly arson attack on a Kyoto Animation Co. studio may have visited the site in the days leading up to the Thursday incident, with a person resembling him spotted by neighbors several times.

Shinji Aoba, 41, has been taken to a hospital in Kyoto after allegedly setting fire to the three-story studio building with gasoline, an incident that killed 34 people. Police are waiting for Aoba to recover from the serious burns he suffered before arresting him. 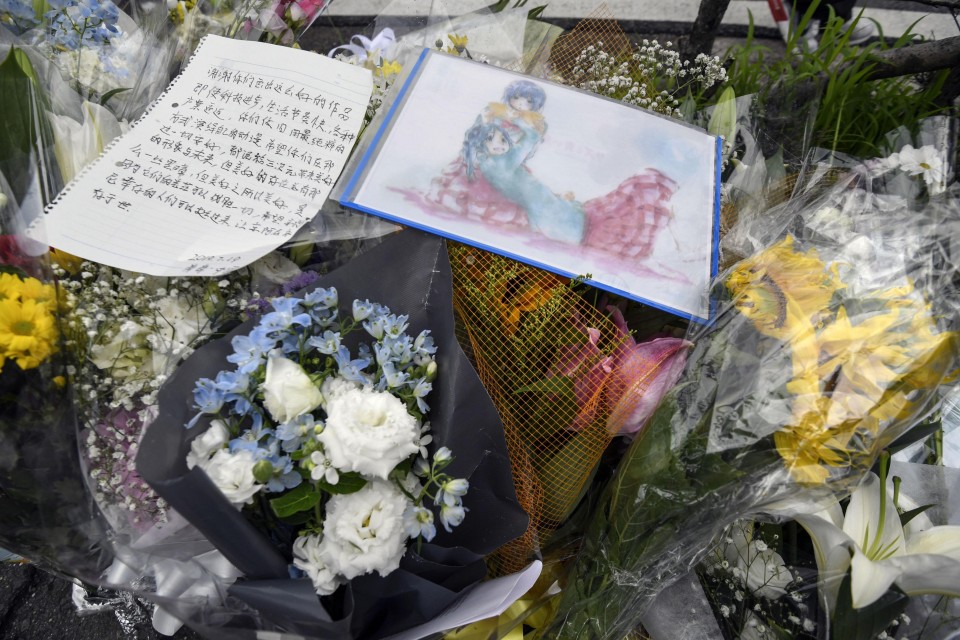 (Flowers and messages are placed near the three-story studio of Kyoto Animation Co. in Kyoto on July 19, 2019, a day after a man set it on fire, leaving more than 30 people dead.)

He was transferred to a hospital in Osaka Prefecture by helicopter on Saturday to receive better medical treatment, the police said.

On Thursday morning, Aoba allegedly entered the studio building screaming "Die!" and immediately splashed a flammable liquid from a bucket, according to the police. They believe he bought gasoline from a gas station near the site earlier in the day and carried two 20-liter cans to the studio on a cart.

Around 10 a.m. the same day, 30 minutes before the incident, a man who looked like Aoba bought 40 liters of gasoline from a gas station near the site, telling a clerk he would use it to power a generator, investigative sources said.

The police believe Aoba carried gasoline in two 20-liter cans to the studio on a cart and used about 10 liters to set the fire, the sources said. They have found the containers with gasoline remaining inside near the site.

A woman in the neighborhood said she saw a man resembling Aoba around Monday near the bicycle-parking space of a convenience store about 200 meters west of the building. He was using a smartphone and, close to him, there were two boxes that appear to have had gasoline cans inside.

Two days later, a high school student spotted a man wearing a red T-shirt and jeans -- similar to Aoba's outfit when he was apprehended -- lying on a bench in a park about 500 meters away from the studio at around 8 p.m. She also saw a cart near the bench.

A junior high school student said she had seen a man like Aoba on Wednesday afternoon and Thursday, the day the studio was set ablaze.

The police have said they have not confirmed Aoba's actual address and occupation, although investigative sources have said his driver's license shows him to be a resident of Saitama, north of Tokyo. 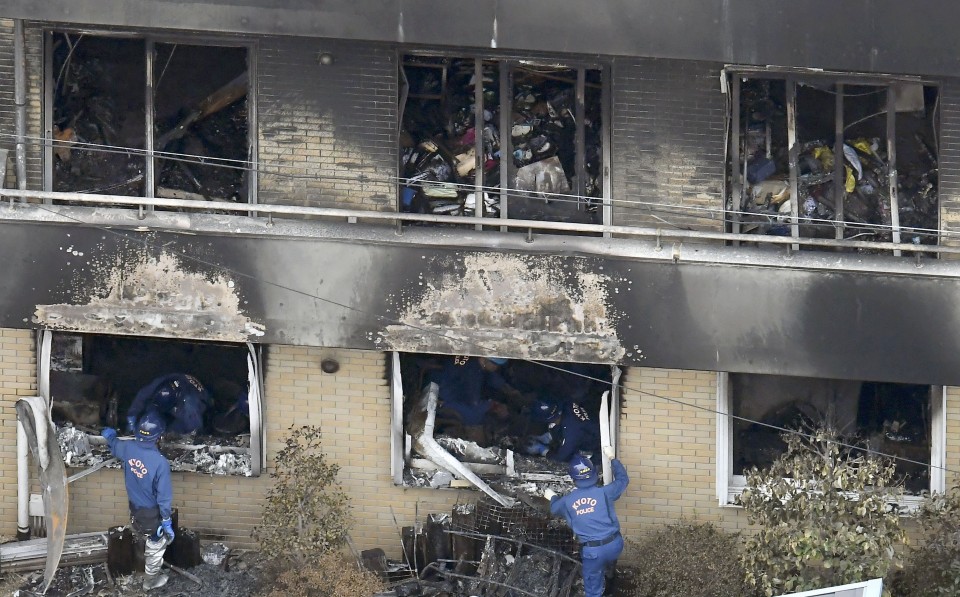 He has a prison record over robbery in 2012, according to the sources. Following his release from jail, as he had a mental illness, he was allowed to be part of a government welfare program for former inmates needing special assistance.

While his motive is not yet clear, he was quoted as telling the police he started the fire because the company "stole a novel," claiming his ideas had been plagiarized.

Kyoto Animation, affectionately known as "KyoAni" in Japan, has produced popular TV animation series including "K-On!" and has a strong following overseas as well as domestically. Its Kyoto studio is a well-known site for anime fans.

People continued to visit the site, where the charred studio building stands, to offer prayers and flowers.

"Its (animation) works were my youth. It's an extremely terrible incident and I wish this were a dream," said Hisahiro Ikeda, a 36-year-old from Gifu Prefecture and a fan of "K-On!"

A 24-year-old company worker from Aichi Prefecture said, "We lost an asset of Japan."