Among the 12 hosts at this year's Rugby World Cup, Oita will stage five matches at a venue located in a remote part of the southwestern Japan city, a situation that has left local transport operators and the prefectural government scrambling with their preparations ahead of rugby's showcase event.

While Tokyo and Yokohama, a port city near the Japanese capital that will host the finals and semifinals, have venues within walking distance from the nearest train stations, Oita Stadium is located nearly 9 kilometers from its major station, requiring at least a 20-minute drive.

The city will welcome rugby powerhouses, including Australia and two-time defending champions New Zealand, when it stages two quarterfinals and three pool matches during the tournament, which runs between Sept. 20 and Nov. 2.

Oita Prefecture, which has its own airport that connects the city in Japan's southern mainland of Kyushu to other parts of the country, expects its 40,000-capacity venue to be full on match days.

About 400 buses will be chartered to take spectators between designated areas in the prefecture and the stadium, and a taxi stand will be set up for fans to grab a ride after the game. Fans will not be allowed into the park that surrounds the venue with their vehicles.

While the prefectural government is convinced the plan will work, a local taxi operator says preparations have been slow since the city rarely serves such big crowds, especially people from overseas.

"We see the World Cup as a huge opportunity, but there is so much more we have to do in terms of preparation," said Tomokazu Sakuma, an official at a local taxi operator. "We don't want to let this chance slip by. When we look back at the tournament after it finishes, we would like to be able to highlight all of the preparations and steps we took."

Sakuma, who works at Futaba Taxi Co., says he is thrilled to have a part in the quadrennial event -- the first major international competition the city has held since the 2002 FIFA World Cup -- but it has not been easy.

"We've been trying to recruit new drivers so we can meet the large demand during the World Cup, but we've had little luck so far. The lack of drivers has been a problem throughout the city," he said.

Futaba Taxi has about 60 employees driving licensed taxis, but hopes to hire at least 10 more so they can rotate shifts on match days. The Oita Prefecture Taxi Association also said that securing drivers for the tournament has been an issue for all 23 operators in the city.

Among the preparations the company has been making is installing cashless payment devices in all of its taxi vehicles so it can accept credit cards, as well as providing English lessons to its drivers.

Rajitha Sandaruwan, a 28-year-old from Sri Lanka, has been giving introductory lessons to his colleagues, most of whom have little experience dealing with English-speaking passengers.

Rajitha, who has been at the company for three years after studying in the prefecture, said he started the class two years ago. He began by going over basic greetings and moved on to asking destinations and taking directions from customers. 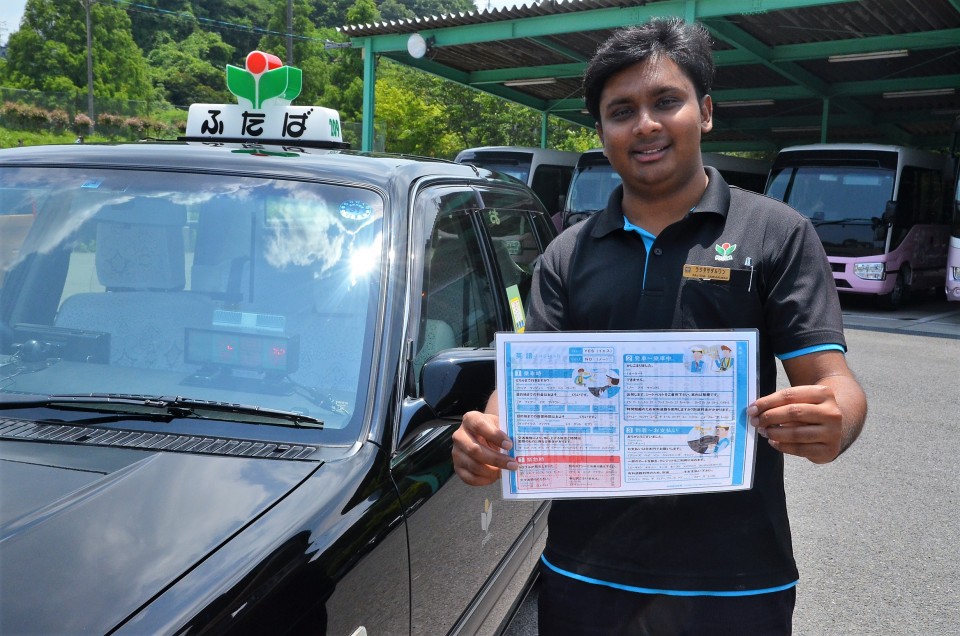 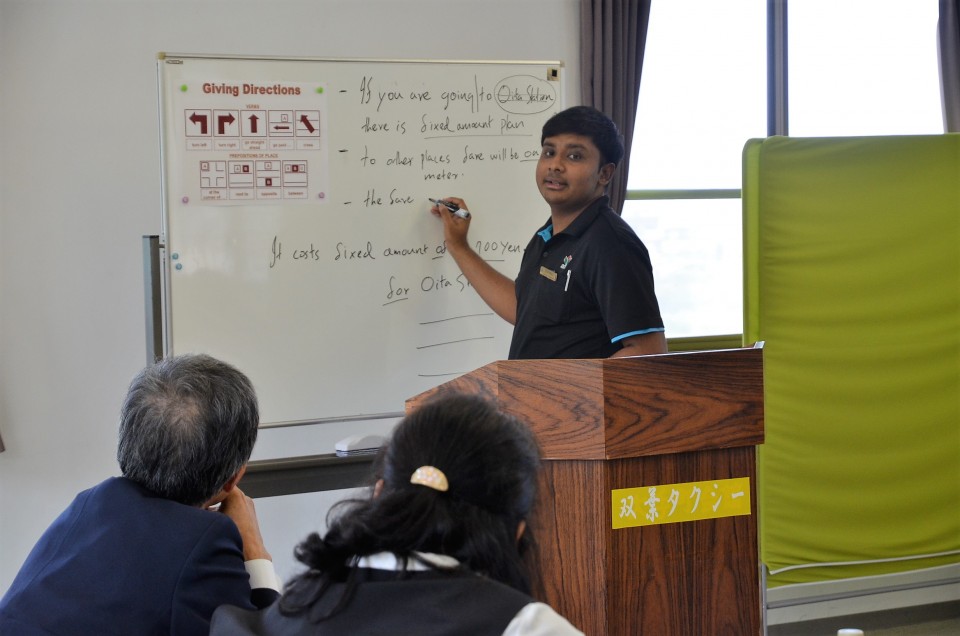 "There is a large gap in the English levels among the drivers," he said. "I try to provide pictures to explain English phrases as easily as possible and listen to what the drivers have to say."

About 10 employees attended a lesson in June, when they learned to ask customers how they wanted to pay or inform them that there is a flat-rate plan between the venue and the station.

The drivers asked questions as they repeated the phrases, which they wrote down in their notebooks.

Concerns regarding transportation were brought to light following a huge traffic jam that occurred before a soccer match at the World Cup venue played between the national teams of Japan and Venezuela last November.

The traffic prevented many fans with tickets from making it to the stadium. Under 34,000 were at the match, although some 36,000 tickets had been sold, according to the Oita Football Association.

The association said several factors, including the weather and time of day, contributed to the congestion. It started building in the early afternoon for the 7:30 p.m. kickoff and a tailback of around 10 km was observed from the highway to the entrance of the park an hour before the first whistle.

The prefectural government, however, said the same thing will not happen during the World Cup because cars will not be allowed to make stops near the stadium on match days. The prefecture will also ask residents and companies to refrain from using roads near the venue.

"We tested our transportation last year, and didn't encounter any major difficulties. We are making a couple of adjustments, but it shouldn't be a problem," said Hidetaka Nasu, an official at the World Cup promotion division at the Oita prefectural government. 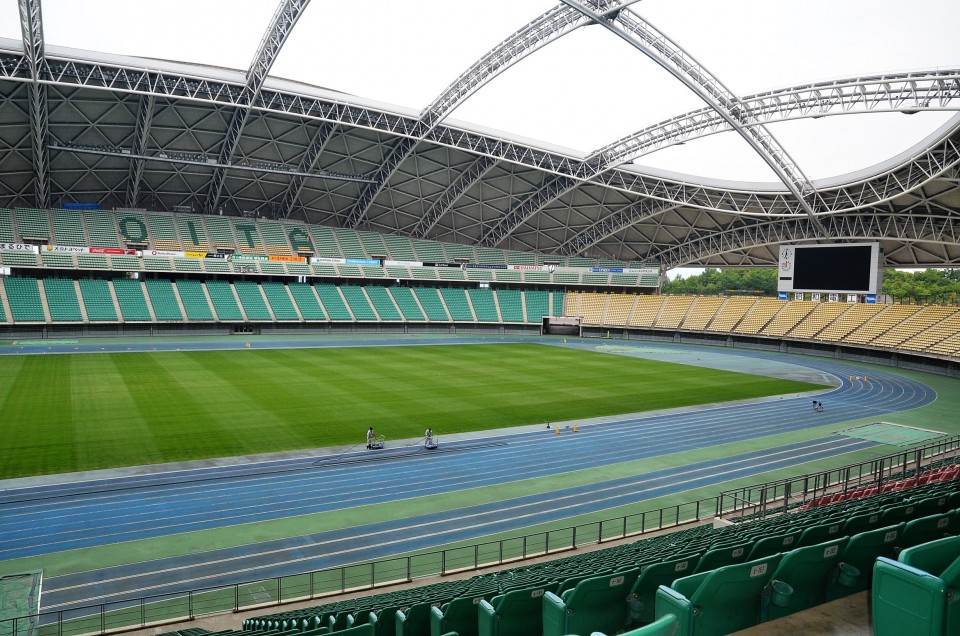 "Oita doesn't have convenient train connections, so transportation of (spectators) will center on shuttle buses. Spectators will not be able to drive to the stadium, so we don't expect traffic to be such a large issue," he said.

In a city where residents rely on cars for transportation, those using them will be asked to park at designated lots in Oita and Beppu cities. They will then transfer to buses that will carry them directly to the venue.

When the prefectural government tried out its transportation measures for a rugby test it hosted in June last year, some 26,000 fans arrived on time, and they were all able to get on buses within one and a half hours of the match concluding.

But as the June test consisted of a much smaller crowd than is expected during the World Cup, Nasu said it is important to inform those coming to Oita of the transportation plans ahead of time in order to avoid confusion.

The prefecture has set up a phone line for fans to ask tournament-related questions in English and Japanese. There is also a smartphone app that shares information about the World Cup as well as tourism in the prefecture.

"We've been receiving inquiries since May, especially from those abroad asking about how to get to the venue," he said. "Our final goal is to create a stress-free environment and have people return to the prefecture even after the tournament."