Two long-forgotten films offering a rare glimpse of the staging of the 1964 Tokyo Paralympics and conditions faced by the physically disabled in Japan at the time have been shown in Tokyo about one year ahead of the 2020 Tokyo Paralympics.

Gathering dust for about five decades, the films capture the atmosphere of Japanese society in 1964, when the aftermath of World War II was still being felt, as well as the active involvement by Japan's then Crown Prince Akihito and Crown Princess Michiko -- now former emperor and former empress -- in the country's disabled sports movement. 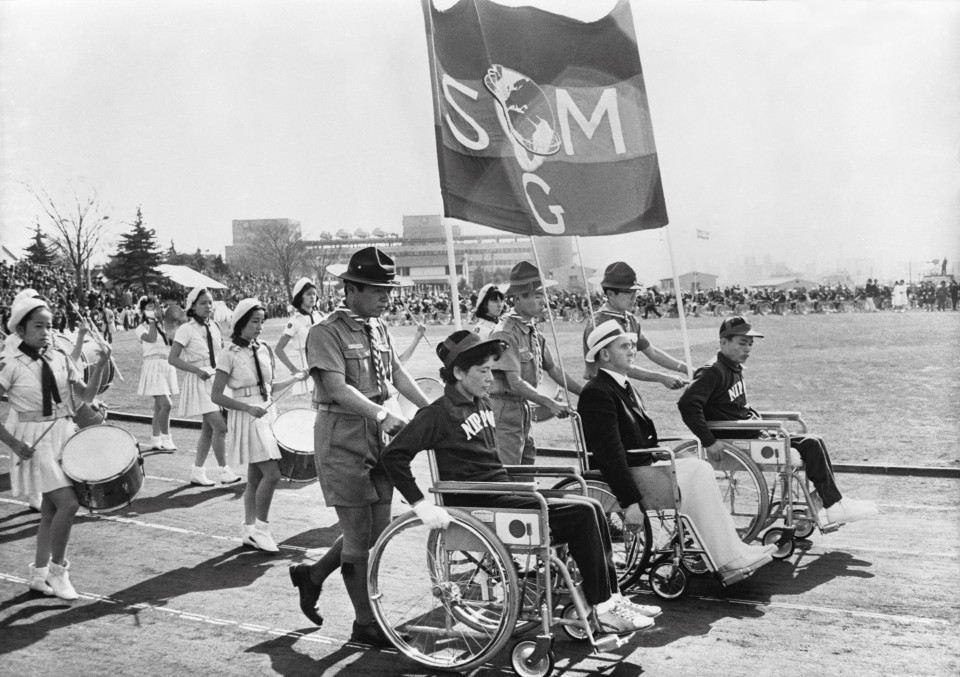 The 1964 Paralympics were officially known as the "International Games for the Physically Handicapped," but the Tokyo event marked the first time that the term "paralympics" came into wide, albeit then unofficial, use. It is now considered by the International Paralympic Committee to have been the second Paralympics after the 1960 Rome Games, which were also called the Paraplegic Olympics.

A few Japanese athletes who competed in the event were former servicemen, and a number of imperial family members visited and watched the competitions, according to the Journal of the Paralympic Research Group by the Nippon Foundation Paralympic Support Center. Many athletes from abroad were also ex-servicemen.

One of the films, whose title translates as "Tokyo Paralympics, festival of love and glory" (Tokyo Paralympic Ai to Eiko no Saiten) had been "buried in the company's massive archives," Satoru Nokuo, associate general manager of Kadokawa Corp., its distributor, said at a screening at Sophia University in July.

The other film, "Record of the 1964 Tokyo Paralympic Games" (1964-nen Tokyo Paralympic Taikai Kiroku Eiga), was found in a warehouse of the Japanese Para-Sports Association, according to Tetsuya Takeuchi, senior commentator at the Japan Broadcasting Corp., known as NHK, who took part in the screenings.

Through interviews and other means, the 63-minute and 45-minute films depict how people with disabilities in Japan regained their sense of worth by playing sports and interacting with overseas disabled athletes who had endured similar struggles.

The former film was directed by cinematographer Kimio Watanabe, while the latter was produced by the NHK Public Welfare Organization.

The films also cast light on the differences between Japanese athletes with disabilities, many of whom lived in institutions at the time, and their foreign counterparts, who in many cases were active members in their communities. 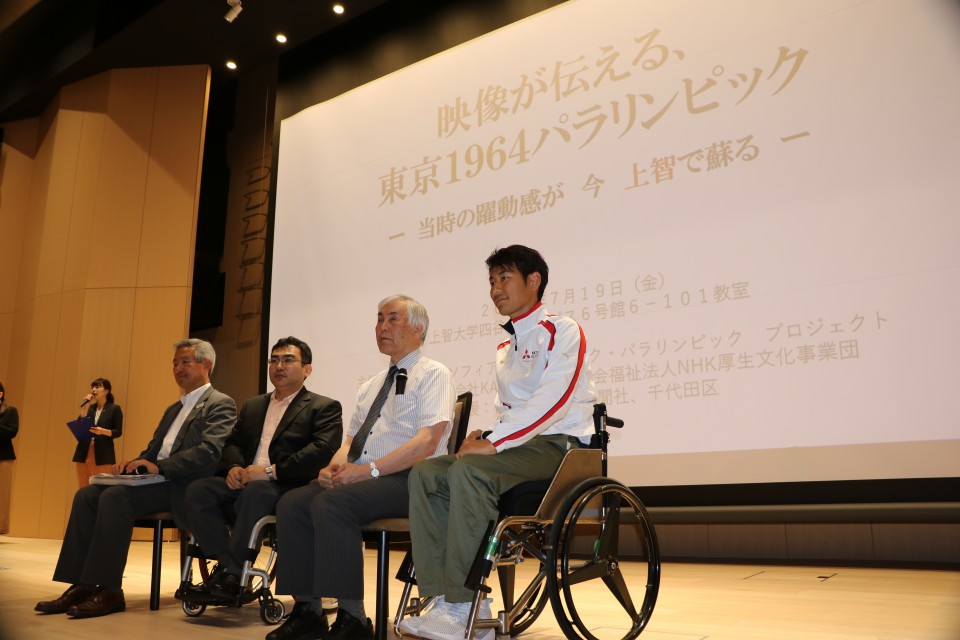 (From left, sitting: Fumio Morooka, professor emeritus at Sophia University, Tetsuya Takeuchi, senior commentator of the Japan Broadcasting Corp., Masahiko Takeuchi, who took part in the second part of the Tokyo Paralympics in 1964, and para archer Tomohiro Ueyama -- pose for photos at a screening event of the 1964 Paralympic films in Tokyo on July 19, 2019.)

For NHK's Takeuchi, who himself is a wheelchair user, the films are a reminder about how much still needs to be done to improve the lives of people with physical impairments in Japan.

While some issues such as accessibility of public transportation have improved, the situation "has not really changed in any significant way. People with disabilities still face challenges in finding marriage partners and jobs," he said.

One big difference between now and then, however, is that disabled sports in 1964 were seen, especially in Japan, as a way to help provide physical rehabilitation for those with impairments rather than as competitive events.

"I've noticed the word rehabilitation was mentioned many times (in the films)," Tomohiro Ueyama, a para archer who competed in the 2016 Rio Games and is expected to compete in the 2020 Games, said at the screening event of the NHK film.

"But it's different now, and I am hoping people will enjoy the Paralympic Games as a sports event in Tokyo rather than rehabilitation."

There was no official film recording of the Paralympics due to a lack of funding sources, according to the report.

"Thanks to the two surviving films, we are able to see what really happened in 1964," said Fumio Morooka, a professor emeritus at Sophia University who moderated dialogue sessions at the screenings, stressing the importance of keeping a visual record of such events.

"As no official announcement has been made yet on the film production to record the upcoming Tokyo Paralympics...I truly hope the public and private sectors will cooperate to produce a visual record that can pass on the legacy of the games to future generations," Morooka said.

Andrew Parsons, the president of the International Paralympic Committee, said in a statement that he was pleased that the original 1964 Tokyo Paralympic Games film had been found and stressed the "lasting legacy" of the games in both Japan and around the world.

"Since 1964 we have seen the Paralympic movement grow and grow, taking leaps and bounds not just for the Paralympians, but also for society as a whole," he said.