Parties engaging apathetic youth in hopes of increasing support base

With low turnout expected in Sunday's upper house election, particularly from disenchanted or simply disengaged young people, Japanese politicians have been forced to get more creative in their chase for voters that are not yet committed to a political party.

In the third national election to be held after the minimum voting age was lowered by two years to 18 in 2016, Japanese electors are also seeing more single-issue campaigners than in the past, creating an additional challenge for the establishment parties.

There is also frustration among some disenfranchised foreigners that their voices are going unheard by any party, a feeling only exacerbated by the political apathy demonstrated by their Japanese friends and neighbors.

In June, the conservative ruling Liberal Democratic Party began a campaign to target young female voters who may not be engaged in politics through an effort launched with popular Japanese fashion magazine ViVi.

The magazine, aimed at readers aged 18 to 22, encouraged its readers to follow its official Twitter account and tweet about issues they consider important with Japanese hashtags "LDP2019" and "OriginalTshirtPresent" for the chance to win a t-shirt. 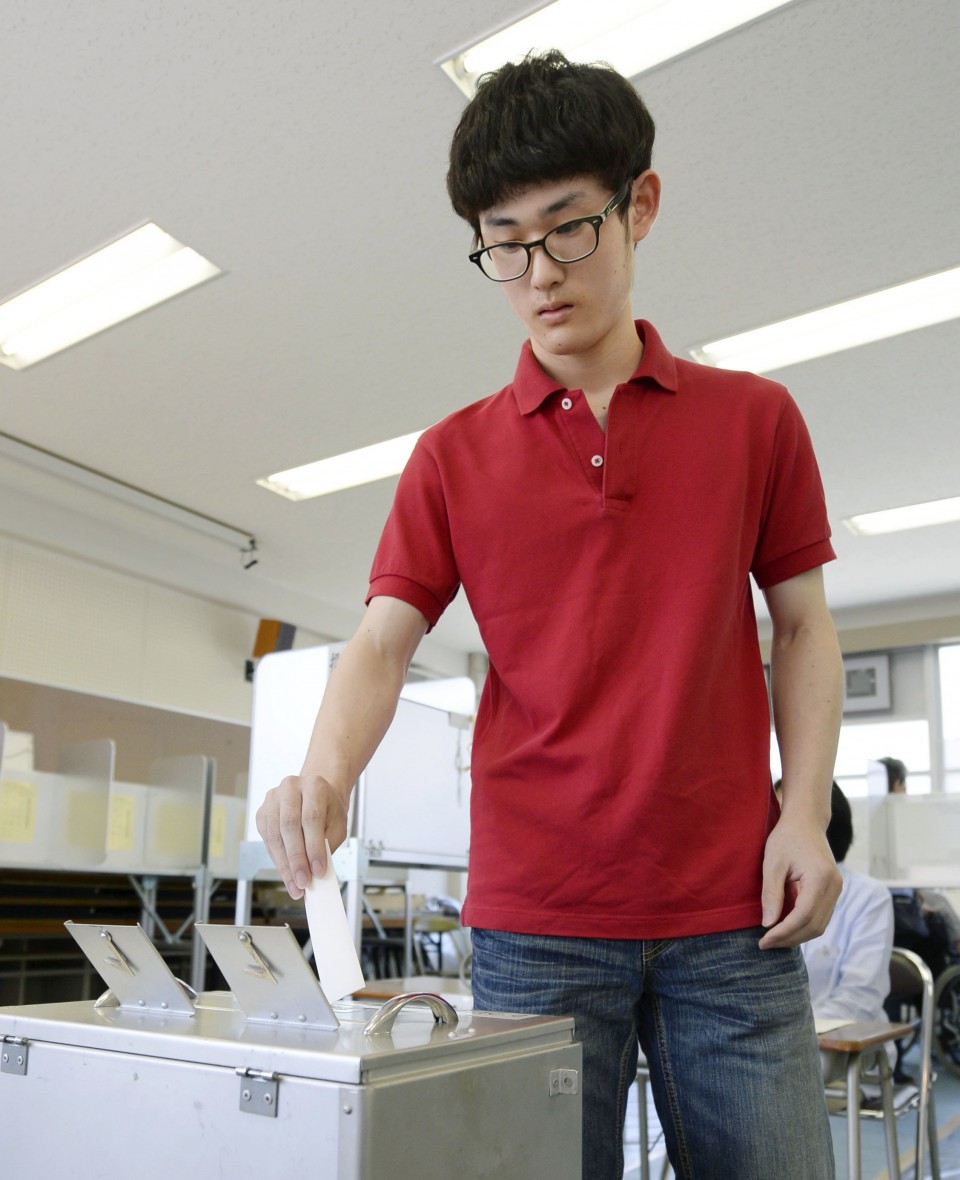 "We want to close the gap between politics and people. For people to feel familiar to it as they do with music and sports," said Akira Amari, chairman of the LDP's Election Strategy Committee.

Yuichiro Tamaki, leader of the Democratic Party for the People, boasts of the engagement he has with young voters, demonstrated by the number of emails he receives from people in their teens and 20s, he says.

In an effort to build on this profile he appeared at a party in Tokyo's Akihabara electronics district earlier this month dressed as Amuro Ray, the protagonist of the popular anime series "Mobile Suit Gundam."

"We will not isolate the younger population," Shii told a crowd outside JR Shinjuku station in central Tokyo.

Despite -- or perhaps as a result of -- the political parties' efforts to reach out, analysts expect youth turnout to remain low in the upcoming poll.

In the previous upper house poll in 2016, the first parliamentary election under the lowered voting age, turnout was 46.78 percent for those aged 18 and 19 but the figure fell to 40.49 percent in the lower house election in 2017.

Both figures were well below the overall turnout rates of 54.70 percent and 53.68 percent, respectively.

"The lack of clear-cut points of difference and the increasingly confusing Japanese political situation, with splits and the creation of opposition parties, are discouraging young people to cast their vote," said Masamichi Ida, a political science professor at Meiji University.

The creation of minor, single-issue parties is likely another approach politicians are taking in hopes of gaining wider appeal in Japan's confusing political landscape.

One such group is "NHK Kara Kokumin Wo Mamoru To" (The Party to Protect the People from NHK).

Established in 2013 by Takashi Tachibana, a former employee of Japan's national broadcaster NHK, the party's primary purpose is to abolish the corporation's aggressive style of fee collection, a long-running irritant in Japanese society.

Another is "Anrakushi Seido Wo Kangaeru Kai" (Consideration for the Euthanasia System), a political group which aims to promote discussion in the Diet around the potential benefits to a liberalized, or even legalized, approach to euthanasia.

The euthanasia party is built on the principle that everyone, including people who are near the end of their life or suffering from illness, should have the right to die, according to its official website.

Leader Hidemitsu Sano, who also led the political group "Shiji Seito Nashi" (No Party to Support) in the previous upper house election, was unable to secure any seats in 2016 despite receiving more than 640,000 votes.

After rebranding his party to "Anrakushi Seido Wo Kangaeru Kai," Sano will run 10 candidates in Sunday's election, in which there are 124 seats up for grabs.

"The situation is totally different from the previous upper house election. People come to us and appreciate the (euthanasia) policy when we campaign on the streets," said a spokesperson for the party.

While many Japanese are not interested in using their vote to influence the future of their country, there is a whole other segment of the population who wish they could.

Disenfranchised foreign residents, many of whom are so-called "lifers" who were born in or came to Japan and plan to stay long-term, do pay attention to developments that may impact their life and the country they have chosen to live in.

One such person is Ha Kyung Hee, an assistant professor in race and ethnicity and immigration at Meiji University in Tokyo.

Ha is an ethnic "zainichi" Korean who has no right to vote in the country of her birth, something that, as a very politically engaged person, frustrates her no end.

"As a third-generation postcolonial Korean resident of Japan, election season is a painful moment as it reminds me that we are still excluded from one of the most basic civil rights," she said.

"My family has been in Japan for 90 years, my first language is Japanese, and I want to call Japan my home. And yet, I hesitate because we are not treated with equality and fairness as full members of society."

Ha points to countries like Ireland, Denmark and South Korea where non-citizens can participate in local elections as a model that Japan should consider because she says "we are also part of this society, make us believe we are."

Percival Constantine, 35, an American who has lived in Japan for around 11 years, agrees that permanent residents and foreigners who have stayed in the country for at least five consecutive years should be eligible to vote.

"Foreign residents pay taxes in Japan, we work in Japan and contribute to the Japanese economy, and the actions of Japanese politicians have just as much of an impact on us as they do on the average Japanese citizen. In some cases, even more of an impact when it comes to matters like immigration policy," the Kagoshima-based novelist and university lecturer said.

For others, practical matters are of more concern during elections.

"Work, family and friends are my priorities...So naturally, the 'free childcare' for 3 to 5-year-olds ticks a box with me," said an English teacher from Ireland, who asked not to be named, in reference to an LDP leaflet.

A resident of Japan for around 11 years, she now lives in Kumamoto Prefecture with her Japanese husband and two kids.

With the sustainability of the public pension system a hot topic ahead of Sunday's election, she added, "Thinking ahead, what care facilities does Japan have for foreigners? I'd be very interested to know how many or if there are any currently in residential care or daycare centers."